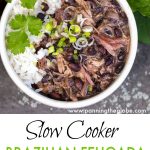 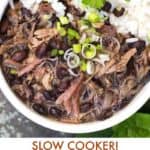 Feijoada is a scrumptious Brazilian meat and black bean stew that's perfect for the slow cooker. The long slow simmer gets the meat super tender and melds all the wonderful flavors. 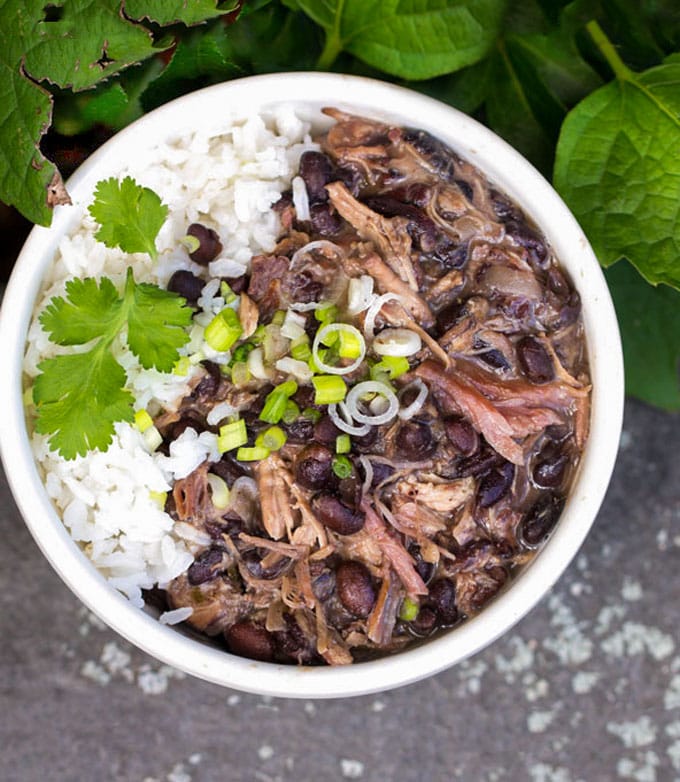 If you like a meaty dish, you might think Brazilian feijoada (pronounced fey-zhoo-ah-dah) is about the most delicious thing on the planet!

Feijoada is a hearty stew of black beans and a variety of meats, braised with onions, garlic and spices until everything is meltingly tender. It's extremely popular in Brazil. Some consider it the national dish.

This lightened up Brazilian feijoada recipe is adapted from Cooking Light. If you follow Panning The Globe, you probably know that I'm part of Cooking Light's Blogger Connection.

I'm a long time fan of the magazine. I can count on finding recipe gems in every issue and I appreciate their approach to making recipes healthier by eliminating unhealthy fats and reducing salt and sugar. 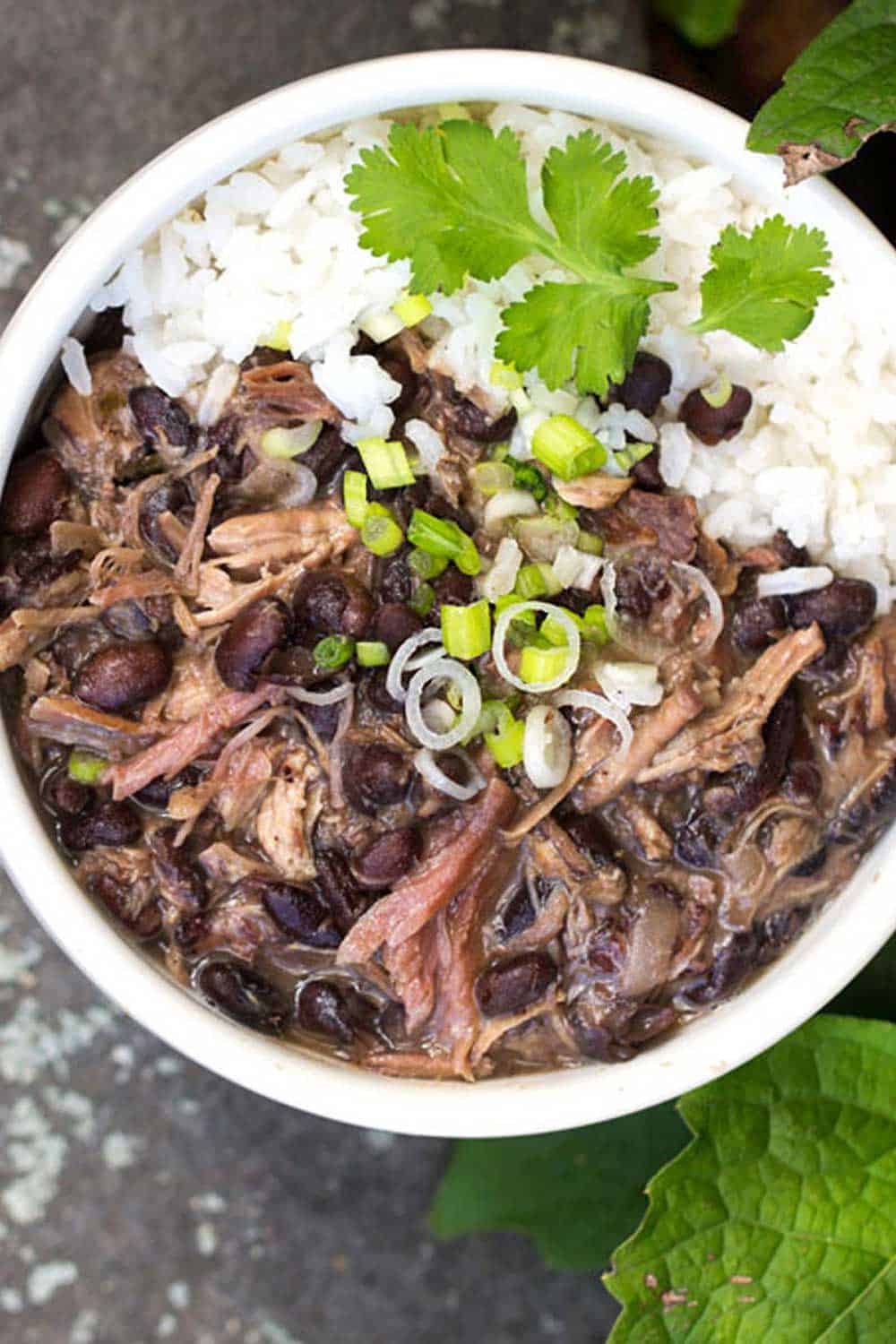 HOW TO MAKE BRAZILIAN FEIJOADA

TIPS FOR MAKING FEIJOADA IN THE SLOW COOKER

Soaking The Beans: If you soak the black beans overnight, which I highly recommend, you'll need to do that the night before. It's easy - just rinse the beans and put them in a glass bowl. Cover them with water by an inch or so. Leave the bowl in a cool spot or in the fridge, to soak overnight. Soaking Guarantees that the beans will cook up nice and tender. 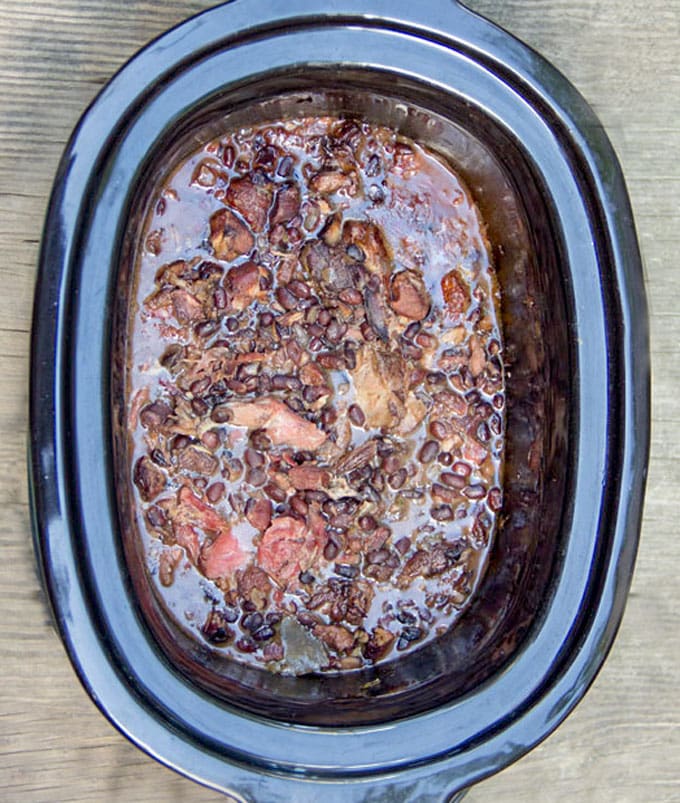 My friend Paula is Brazilian. She was excited when I told her I was making feijoada. She told me how incredibly delicious it is, that it's her father's absolute favorite dish. 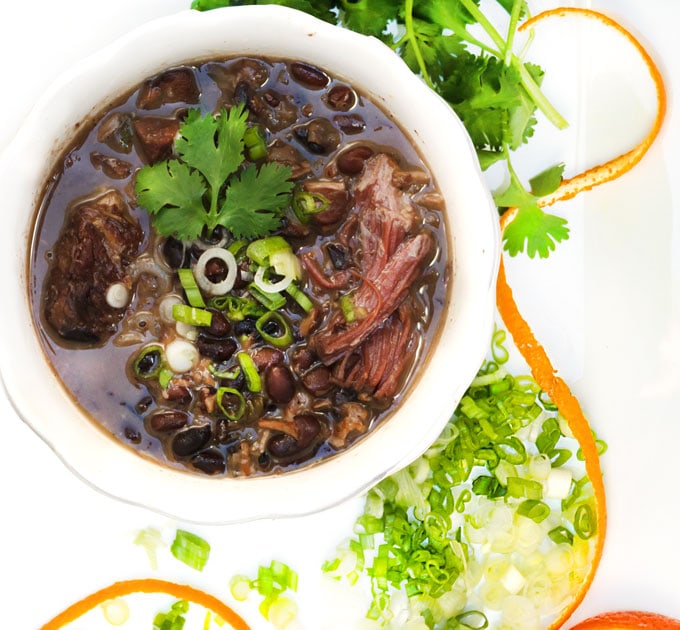 She explained that in different parts of Brazil there are variations on what kinds of meats and beans are used for feijoada.

She also explained that many people in Brazil like their feijoada very soupy so they can serve it heaped on top of a big platter of rice to soak up the delicious sauce, and that they love to sprinkle crunchy toasted manioc flour on top.

If you like using your slow cooker, don't miss these other delicious Panning The Globe slow cooker recipes: 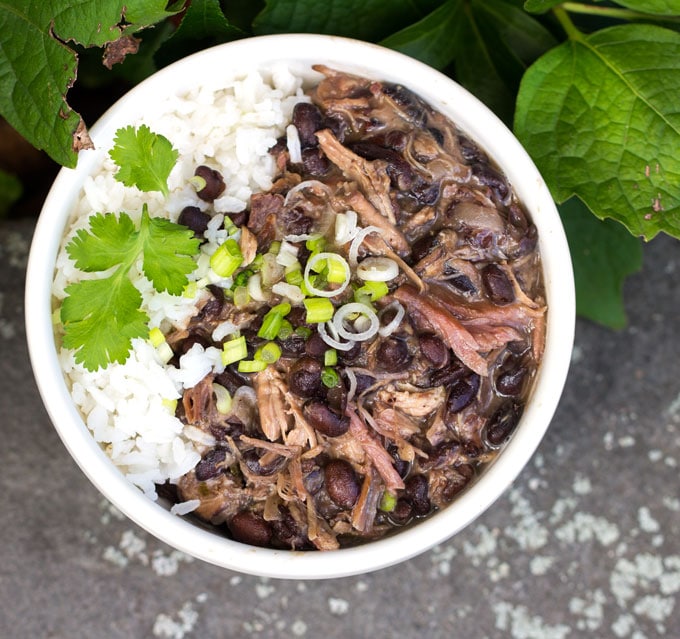 Here's the Slow Cooker Brazilian Feijoada Recipe. If you try this recipe I hope you'll come back to leave a star rating and a comment. I'd love to know what you think!

A lightened up, slow-cooker version of Brazil's famous meat and bean stew.

SUGGESTED SIDES: Plain white rice is a traditional accompaniment. Sautéed collard greens is a perfect side dish with Feijoada. Or choose another leafy green like spinach or kale.