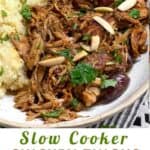 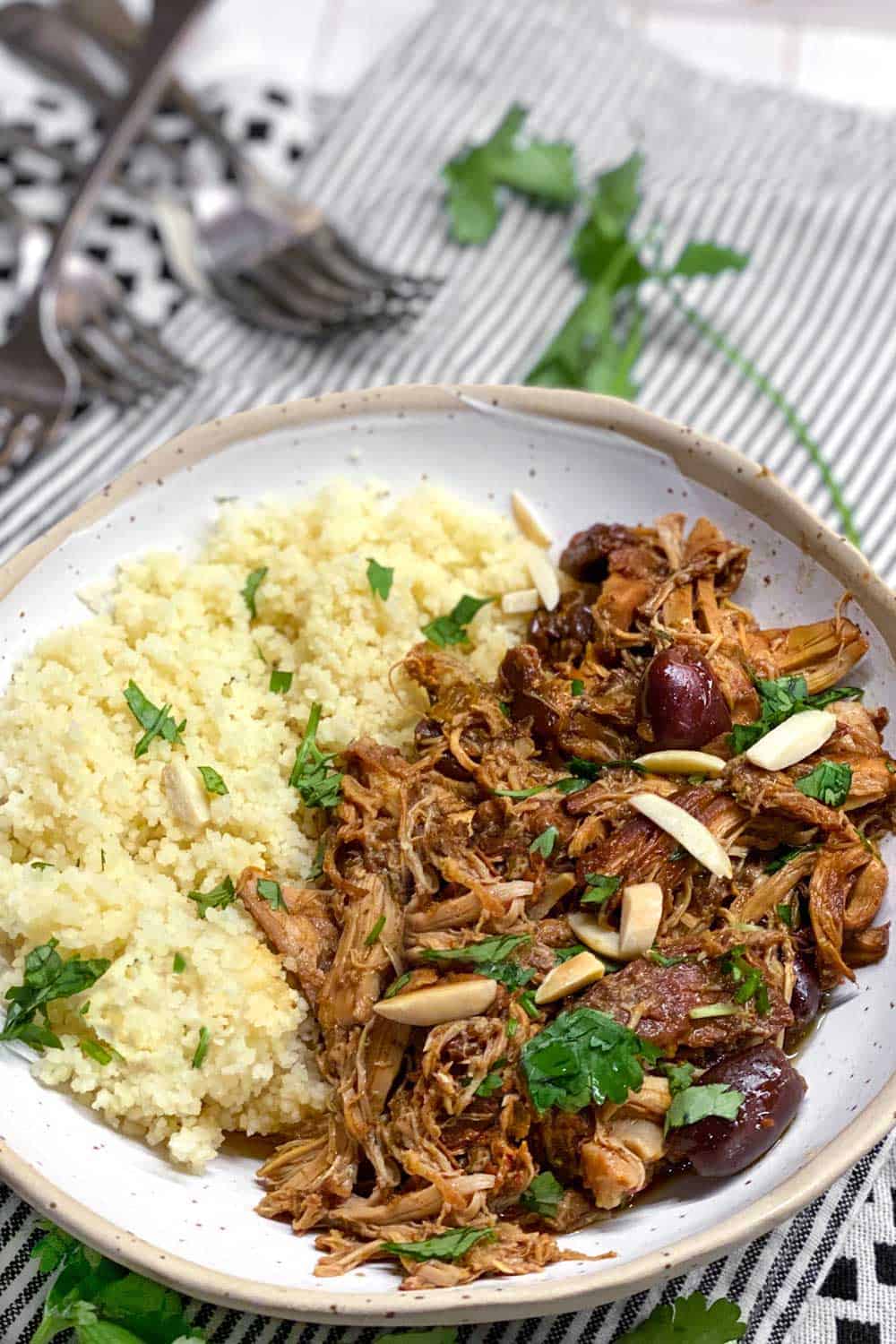 This easiest of crockpot recipes requires no sautéing or fuss. Just throw everything in the pot and let the magic happen. This can be made in an electric slow cooker or on the stovetop in a Dutch oven. Instructions are included for both.

Although this slow cooker chicken thighs recipe is easy, family friendly and perfect for a weeknight dinner, I also love making it for guests. The chicken is melt-in-your-mouth tender and there's such a great balance of exciting, contrasting flavors at play here, with salty olives, sweet tangy cherries, hot red pepper flakes and rich fruity wine, just to name a few. Everyone who tries this dish is wowed, and I always get requests for the recipe.

It's worth telling you a fun story about my friend Shari who made these slow cooker chicken thigh for celebrity chef Ming Tsai. I'll never forget her S.O.S. phone call: Lisa help! Ming Tsai is coming to dinner? What am I going to make? I remember reassuring her that "It doesn't really matter what you cook. Throw some burgers on the grill and I'm sure Ming will be thrilled. It's the people and the conversation and the warmth of your home that will make the night special." But of course we both wanted to come up with something delicious.

In the end I suggested this slow cooker chicken thighs recipe because it's easy, fail-proof, and out-of-this-world delicious. Shari did a test run and agreed this dish was perfect for the occasion. She served the chicken over couscous, with a simple green salad and some beautiful sage rolls from a local bakery. I called her first thing the next morning to hear how things went. She said it was a great night and that Ming and his wife loved the meal. (Phew!)

What you will need for this recipe 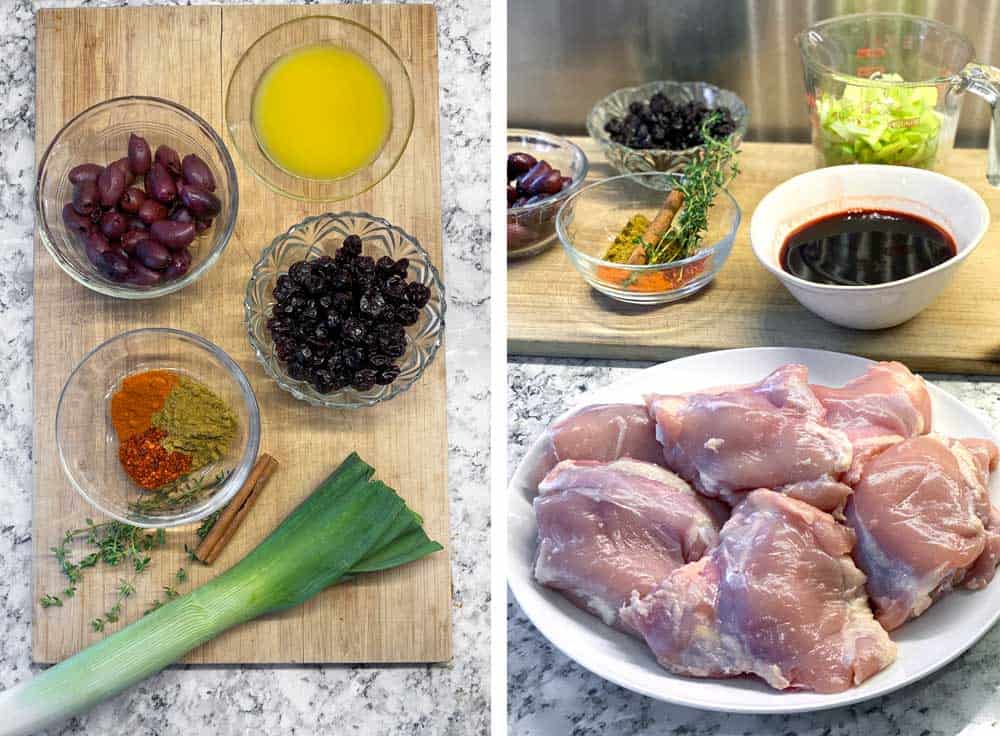 How To Make These Delicious Slow Cooker Chicken Thighs

As slow cooker recipes go, this one could not be easier. Slicing the leek is the only thing you have to do, beside plopping everything into a pot and turning on the heat. 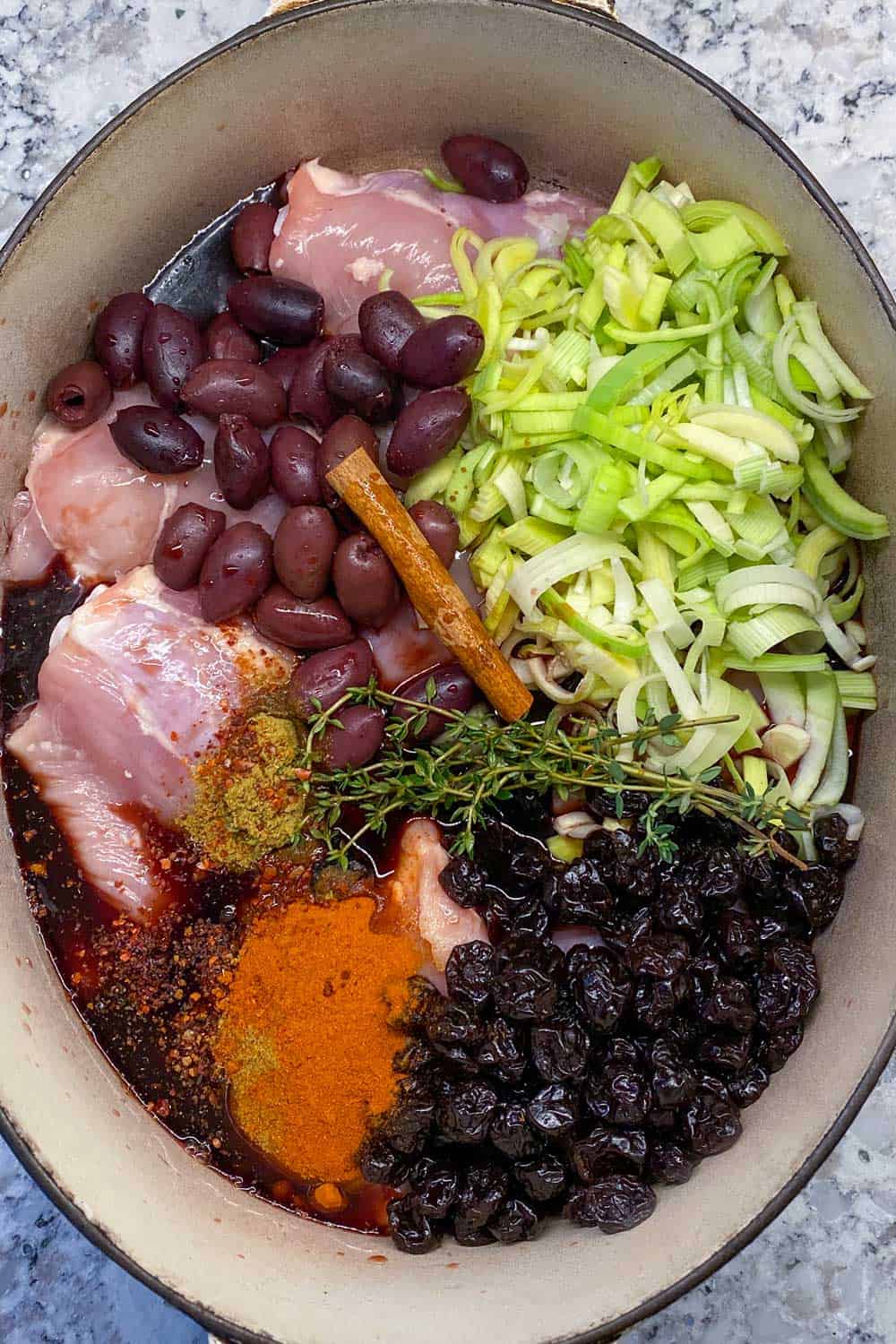 The final step of this recipe is removing the bones and cinnamon stick from the pot, and stirring the tender chicken so it falls apart into the luscious sauce. 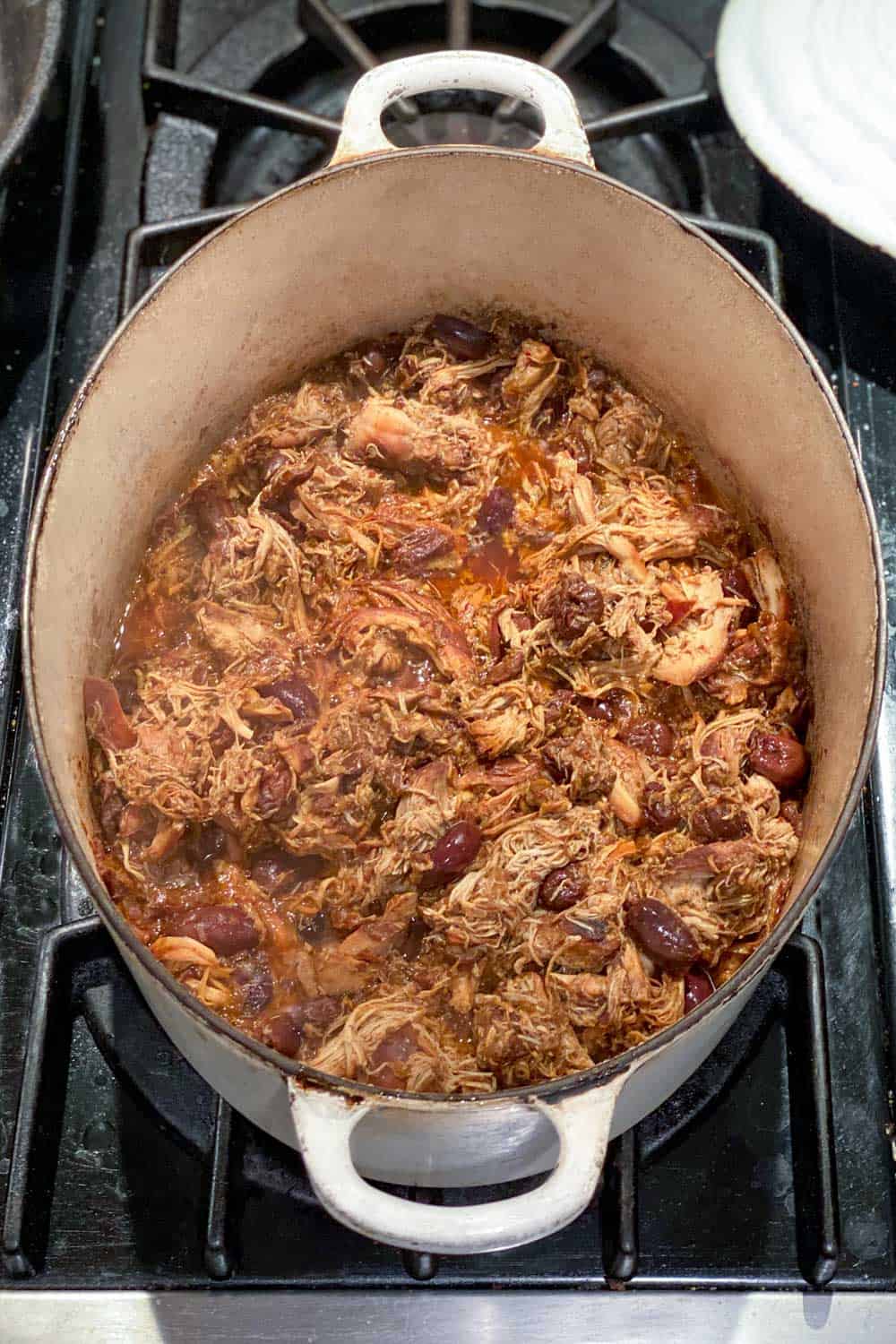 What to serve on the side 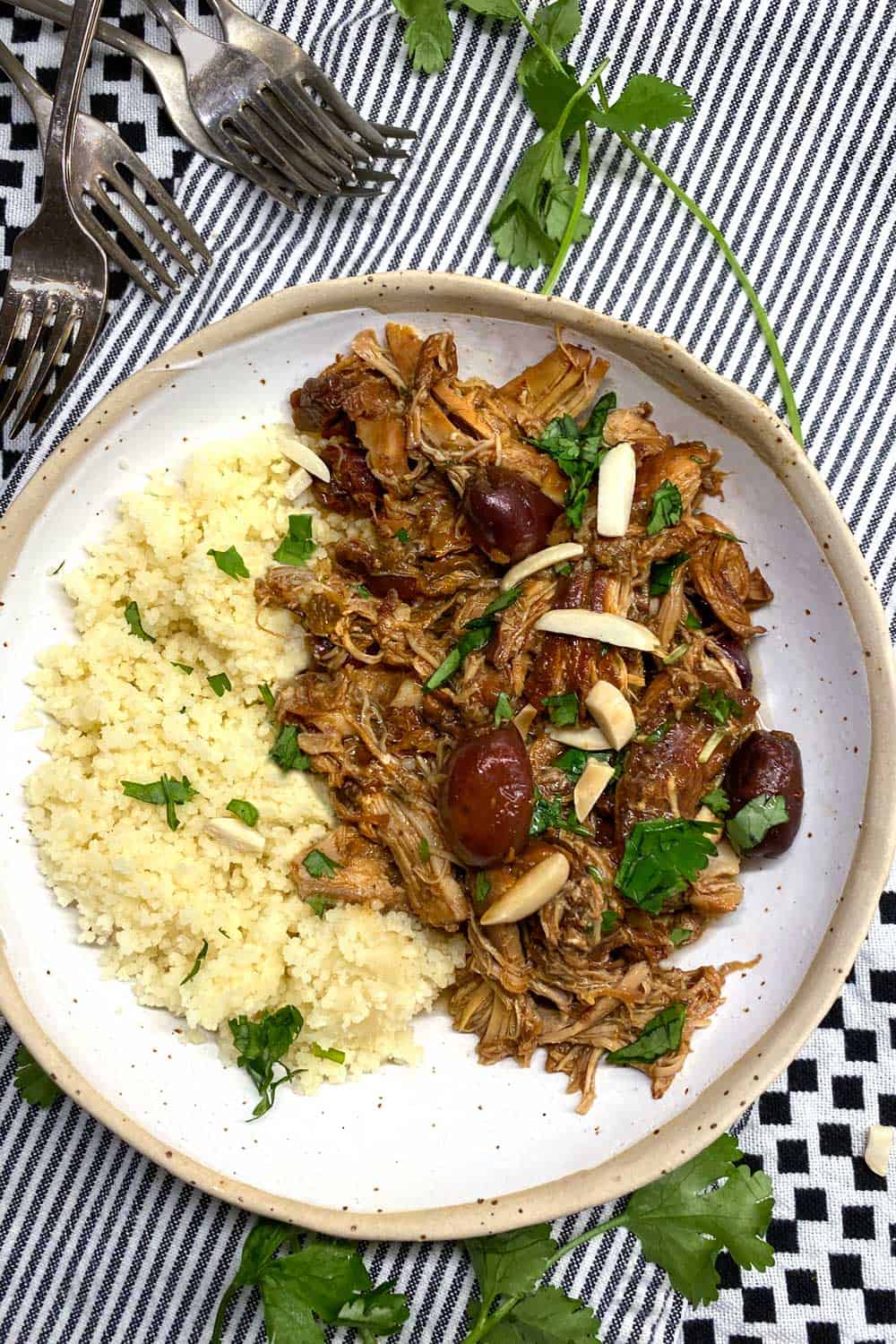 Here's the Slow Cooker Chicken Thighs Recipe. If you try this recipe, I hope you'll come back to leave a star rating and a comment. I'd love to know what you think!

How to toast slivered almonds: toss almonds in a small dry fry pan (preferably cast iron) over medium heat for a couple of minutes until they start to turn golden brown. Attend to them constantly so they don't burn. As soon as they start to turn golden brown, turn off the heat and continue to stir them. They will continue to brown from the heat of the pan.

Cook a big batch and freeze some: This dish freezes beautifully. To freeze, cool to room temperature, then transfer to a large resealable freezer bag, being sure to take out as much of the air out as you can before sealing. Getting rid of the excess air prevents freezer burn. To reheat, run a little cool water over the bag until you can pull the plastic away from the contents. Put the frozen chicken into a large heavy pot. Add ½ cup of water and bring to a boil. Lower to a simmer, cover the pot and simmer gently, stirring occasionally, until the chicken is heated through.

Originally published November 16, 2012. Updated January 12, 2021 with new photos, clarifying details in the written post and more details in the recipe about how to cook this in a Dutch oven. Same delicious recipe! 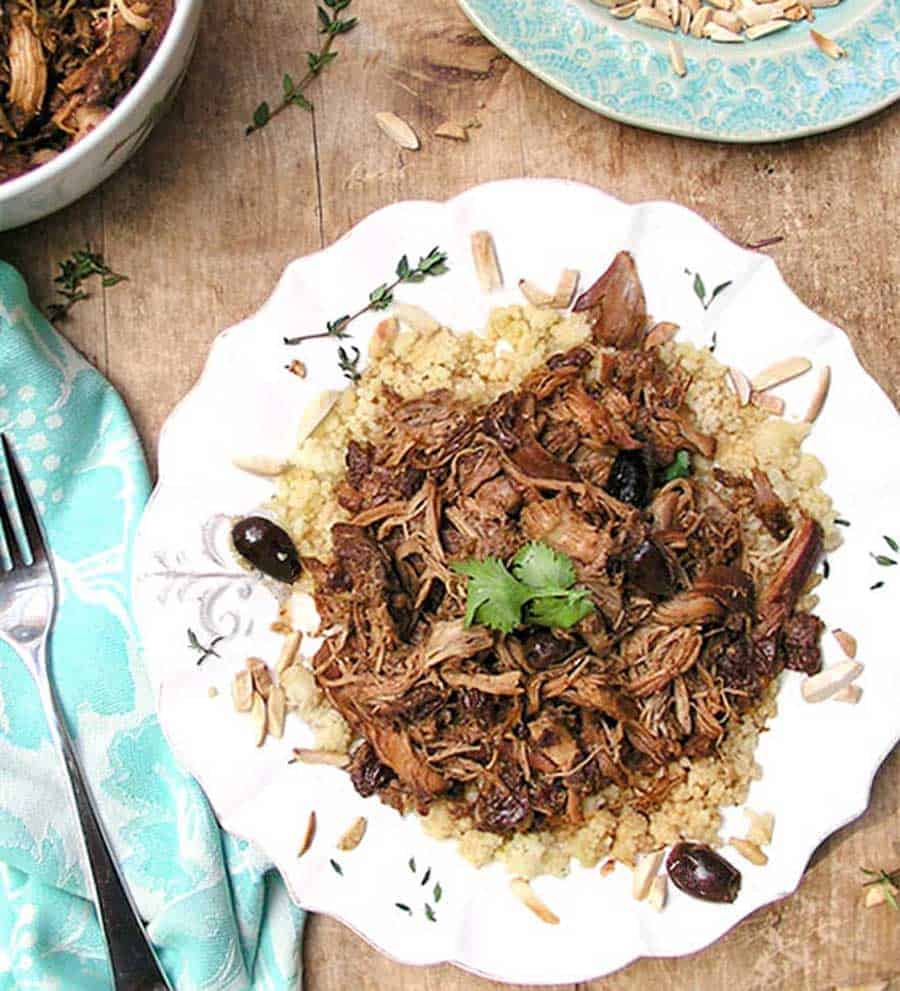