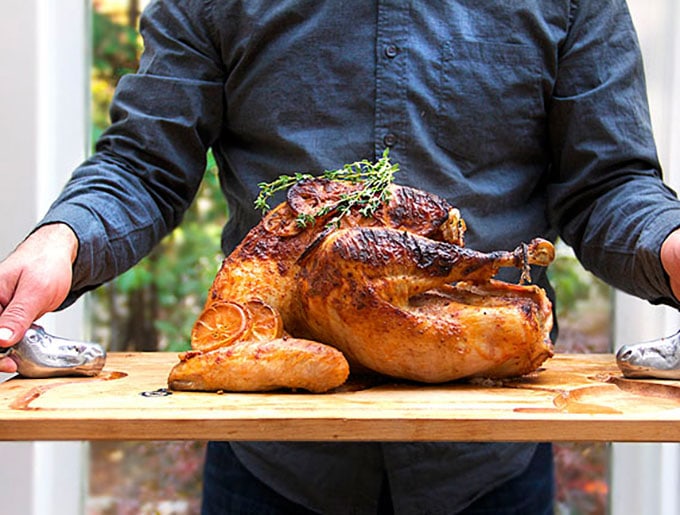 If I tell you how many turkeys I've roasted in the past 2 weeks - promise not to laugh?  I think I'll wait 'til the end to tell you - better if you hear the whole story first.  But I will tell you that the result of my two-week turkey preoccupation resulted in this tasty, tender, spicy yogurt marinated turkey.  It's a Turkish-inspired recipe with bright and zesty flavors of yogurt, lemon, garlic and Aleppo pepper. 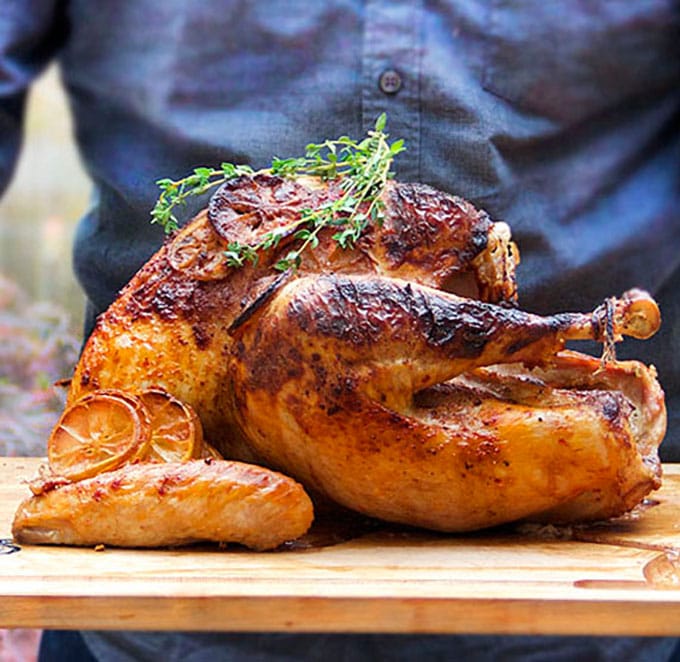 Roasting a turkey is challenging! How do you cook a giant bird for hours without drying it out and making it tough? Every Thanksgiving there's a buzz about some new innovative approach. I've tried so many techniques over the years: brining; spatchcocking; disassembling: basting with butter over a cloth-draped bird; smoking; high-heat for a shorter time; low heat for a longer time....

I've enjoyed many of these turkeys over the years - but not enough to stop me from searching. 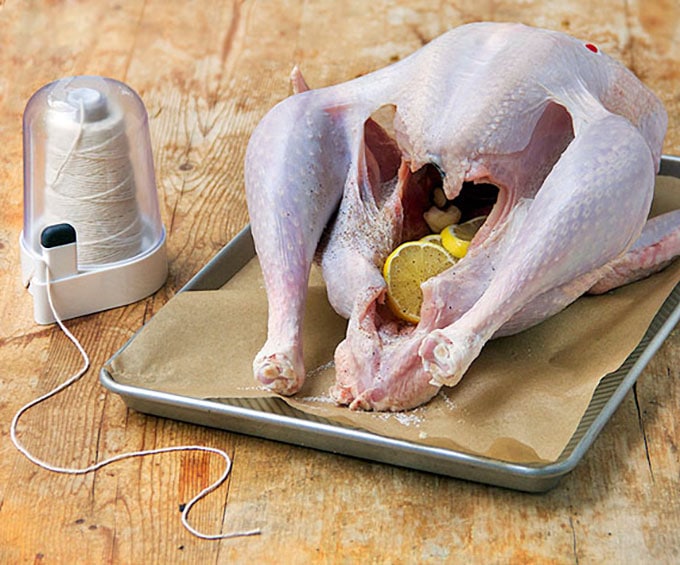 What inspired me to start testing turkey recipes a month before Thanksgiving was that OXO provided me with the ultimate turkey tools and invited me to be part of the OXO TurkeyDay Giveaway! ***NOTE: THIS GIVEAWAY HAS ENDED***

When you're cooking a turkey (or - in my case - many turkeys) it's so much easier and more fun when you have great equipment for the job!

I'm happy to tell you that you have a chance to win these same great turkey tools!  You'll find the form to enter the OXO TurkeyDay Giveaway at the end of this post. Good luck! *This Giveaway has ended.

In case you're not familiar with the brand, OXO is a company that makes innovative kitchen tools and housewares. Their mission is to "make products that make a tangible improvement in peoples' daily lives."  I'm a longtime fan of OXO and so happy to be partnering with them on this post and offering you a chance to win these great TurkeyDay tools! 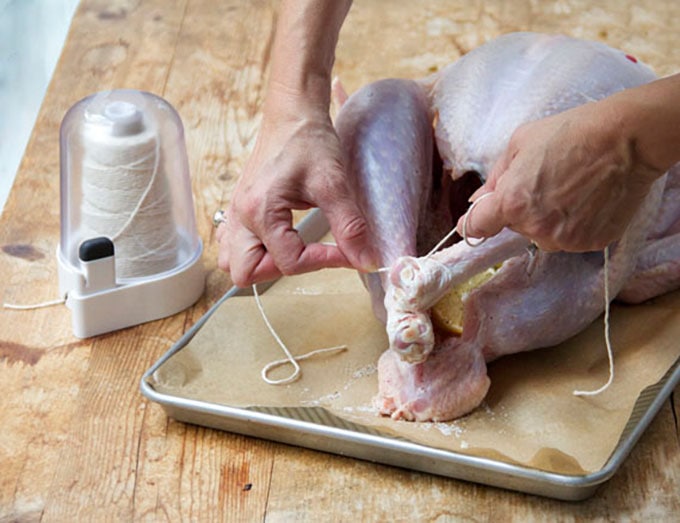 I decided to harness the magical tenderizing powers of yogurt to roast my turkey.  I've had tremendous success with yogurt-marinated chicken on the grill!  I was excited to try the same approach with my turkey. 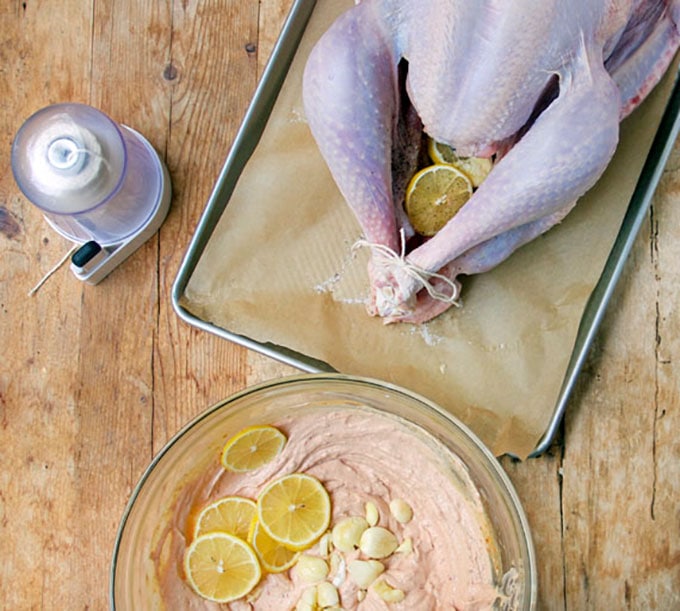 My idea was to create a thick coating of deliciously spiced yogurt to coat the bird. I had a feeling that marinating and cooking the bird in yogurt would tenderize it and keep the it moist and juicy throughout the cooking process. 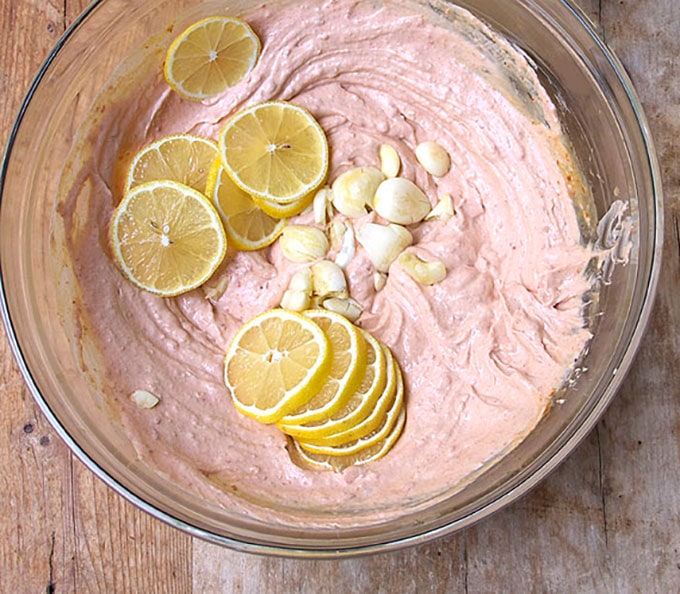 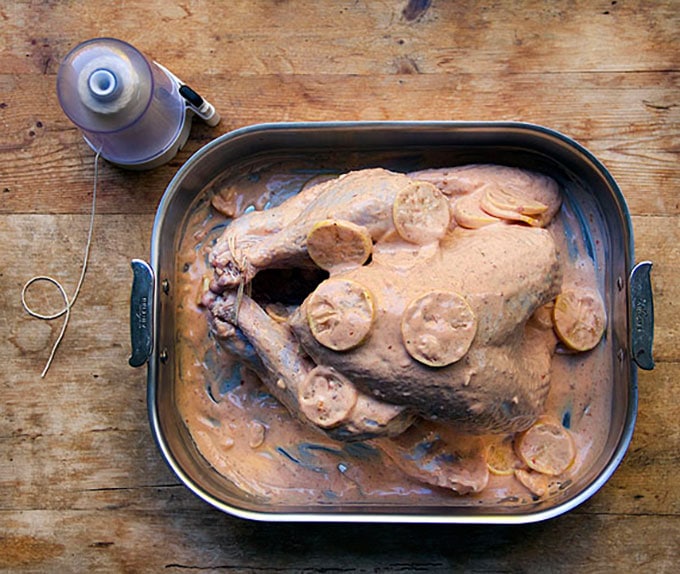 Spicy yogurt marinated turkey number one was delicious! It was everything I had hoped for except it was a bit burned in spots and the yogurt sauce in the pan had separated and looked a bit curdled. (I took this photo with my iPhone because I was testing my recipe for the first time) 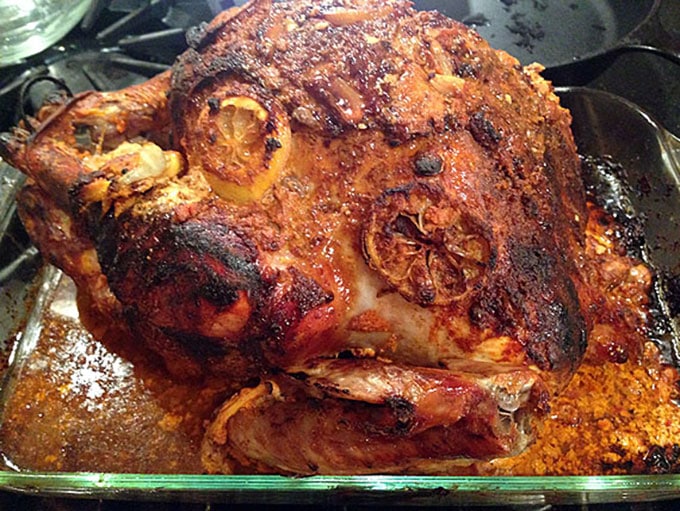 I did some research on cooking with yogurt.  It turns out yogurt becomes unstable when heated to high temperatures - that's because of its protein content. I discovered that the higher the fat-to-protein ratio, the more stable the yogurt.  So using low fat or fat free yogurt for cooking is not going to give you a creamy sauce.

One of the most interesting resources I found online was a bunch of forums - Indian cooks - discussing how to prevent yogurt-based curries from curdling. The one tip that was widely agreed upon in the forums was to whisk yogurt in one direction only, so as not to break up the protein bonds.  I couldn't corroborate the scientific validity of this advice, but I figured it couldn't hurt to follow it, so I did!

I also learned that you can temper yogurt by whisking in flour or cornstarch.  I tried that on one turkey.  It didn't seem to make too much of a difference so I decided it would be better to keep the recipe gluten free. 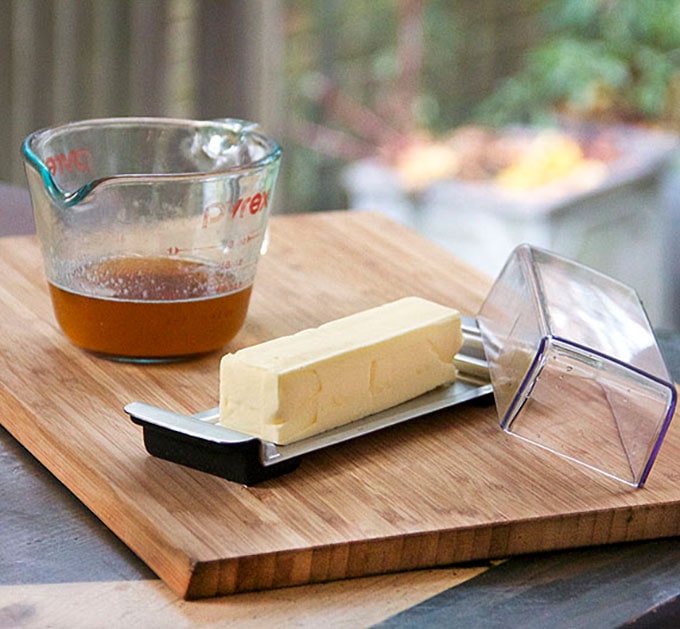 I tried basting a couple of turkeys with brown butter. Brown butter has a rich nutty flavor that I've enjoyed in other Turkish recipes. It was good but in the end I felt that it overpowered the gravy - I preferred plain butter. 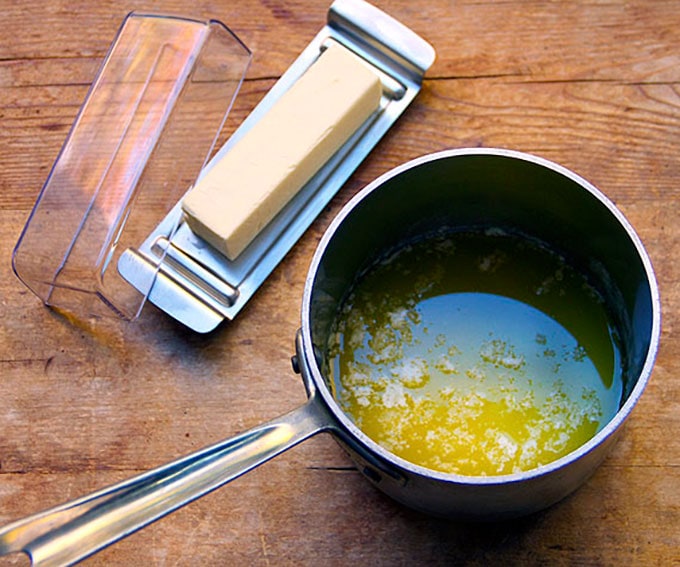 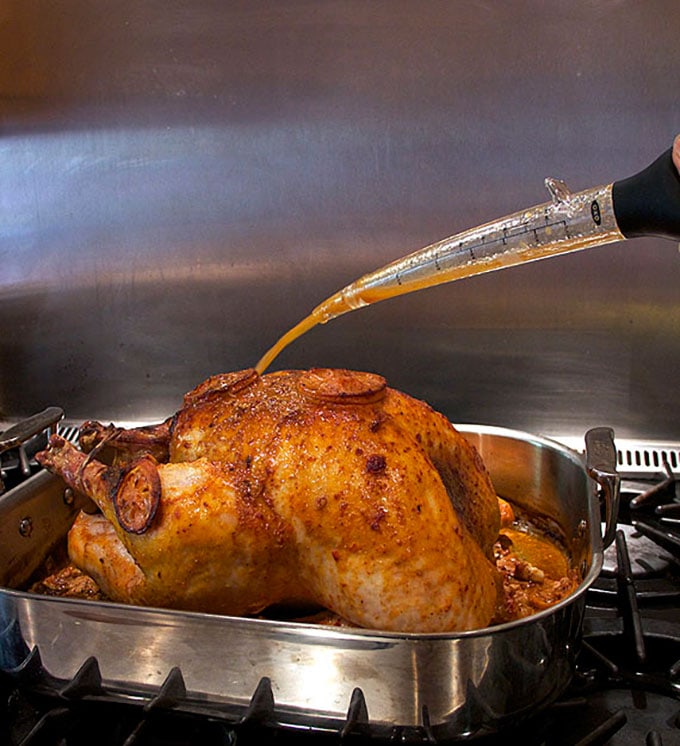 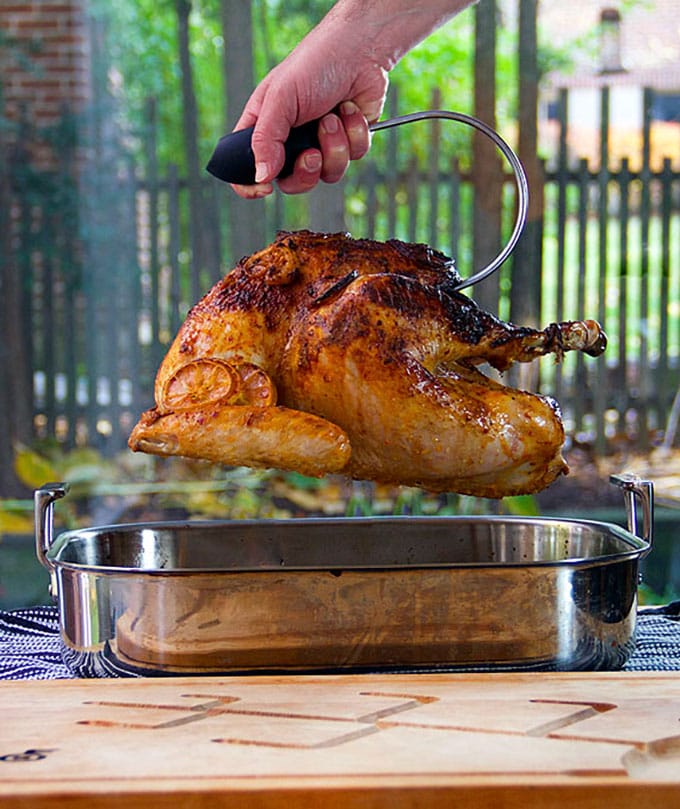 After defatting the pan drippings, I pureed them along with all the garlic cloves that roasted with the turkey. The result is a rich, spicy gravy. 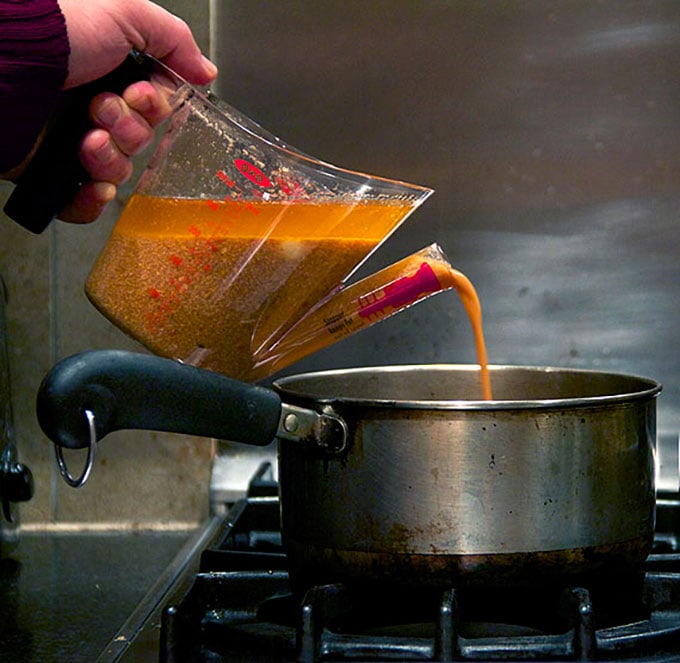 The one issue that took me the longest to pinpoint - 4 turkeys later - was that not all whole milk yogurts are created equal. Some have a built-in stabilizer!

Turkey Number One had the best coating of the first four turkeys.  I used Stonyfield Farm Smooth and Creamy yogurt for that turkey.  For the other three I used Fage Total Greek yogurt.  After a lot of frustration with the coatings and sauce quality of turkeys two, three and four, it finally occurred to me to compare the ingredients in the two yogurts. Stonyfield adds pectin to their thick and creamy yogurt. Fage doesn't. Pectin is a stabilizer!  It keeps the yogurt together - smooth and creamy - even when cooked at a high temperature. 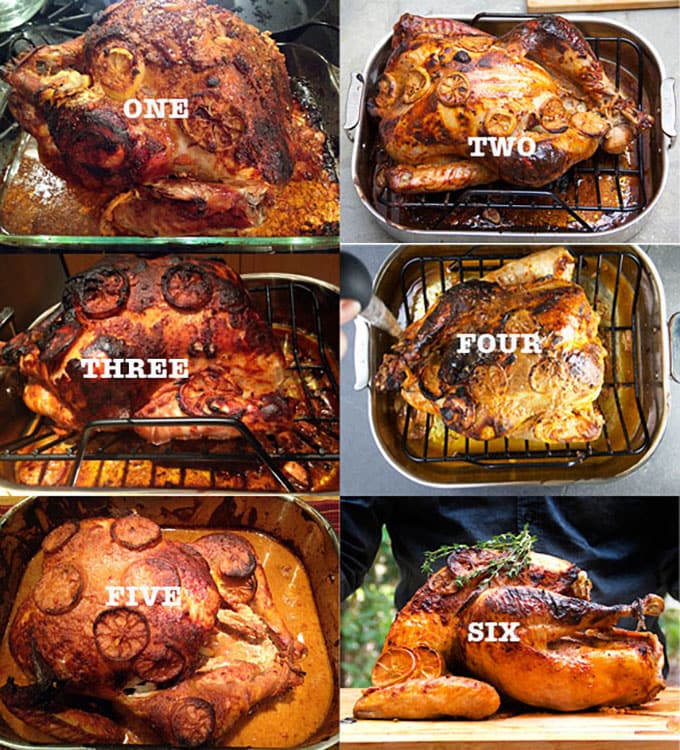 You must be wondering what I did with all that turkey!?!  I gave a lot away to friends and neighbors.  I made turkey soup, turkey enchiladas, turkey paninis, turkey salad... 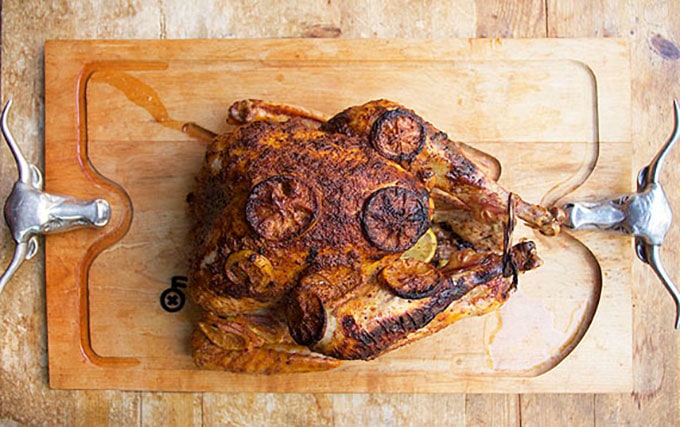 If you're still planning your thanksgiving menu, check out my 16 Best Thanksgiving Recipes from Panning The Globe post. I hope you have a wonderful Thanksgiving holiday!

Here's the Spicy Yogurt Marinated Turkey Recipe. If you try this recipe, I hope you'll come back to leave a star rating and a comment. I'd love to know what you think. 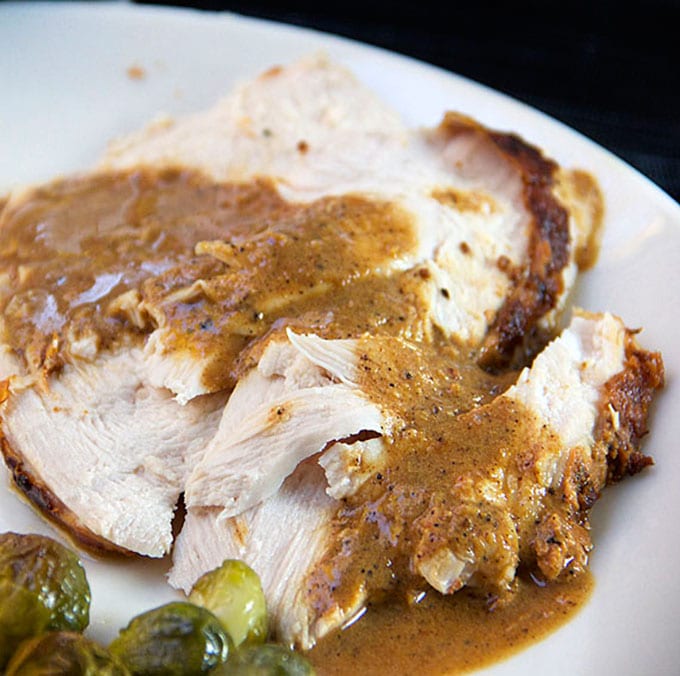