×
You are here: Home / Bread / Our Favorite Bialy Recipe
Jump to Recipe·Print Recipe 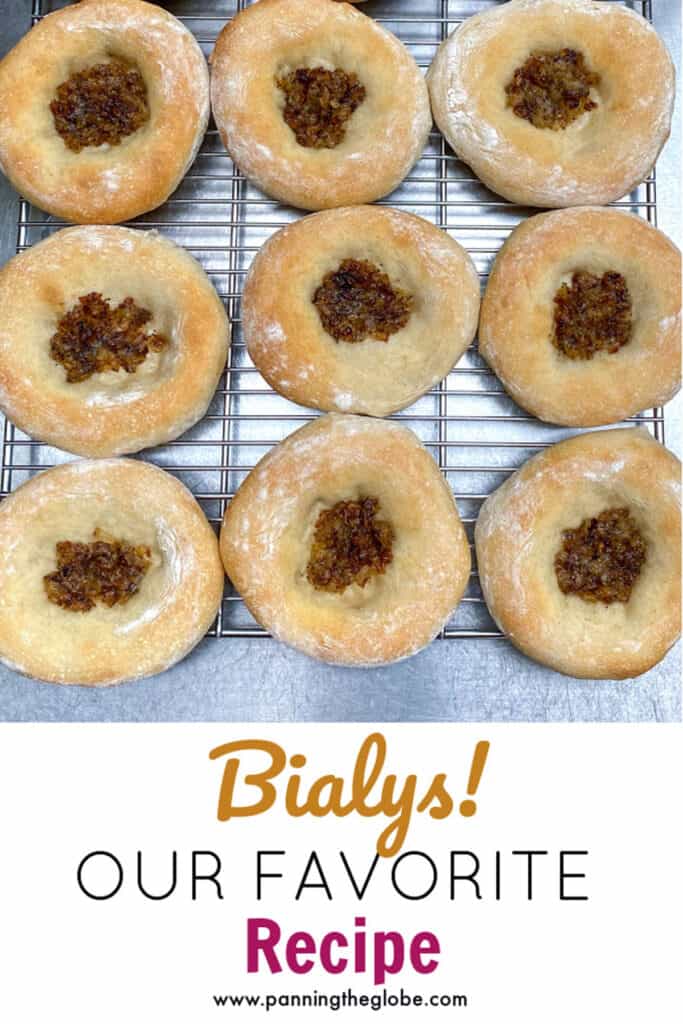 A Bialy is a delicious, oniony breakfast roll in the family of bagels, only better! Its unique shape results in asymmetrical pieces upon slicing, with one side having a hole and the other having an onion filling in the center. They are best served toasted, then sliced and spread with butter - I won’t eat them any other way. Bialys came to New York in the early 1900s with the immigration of Eastern European Jews. I can only imagine the taste of these special treats made their new world feel a little more like home. 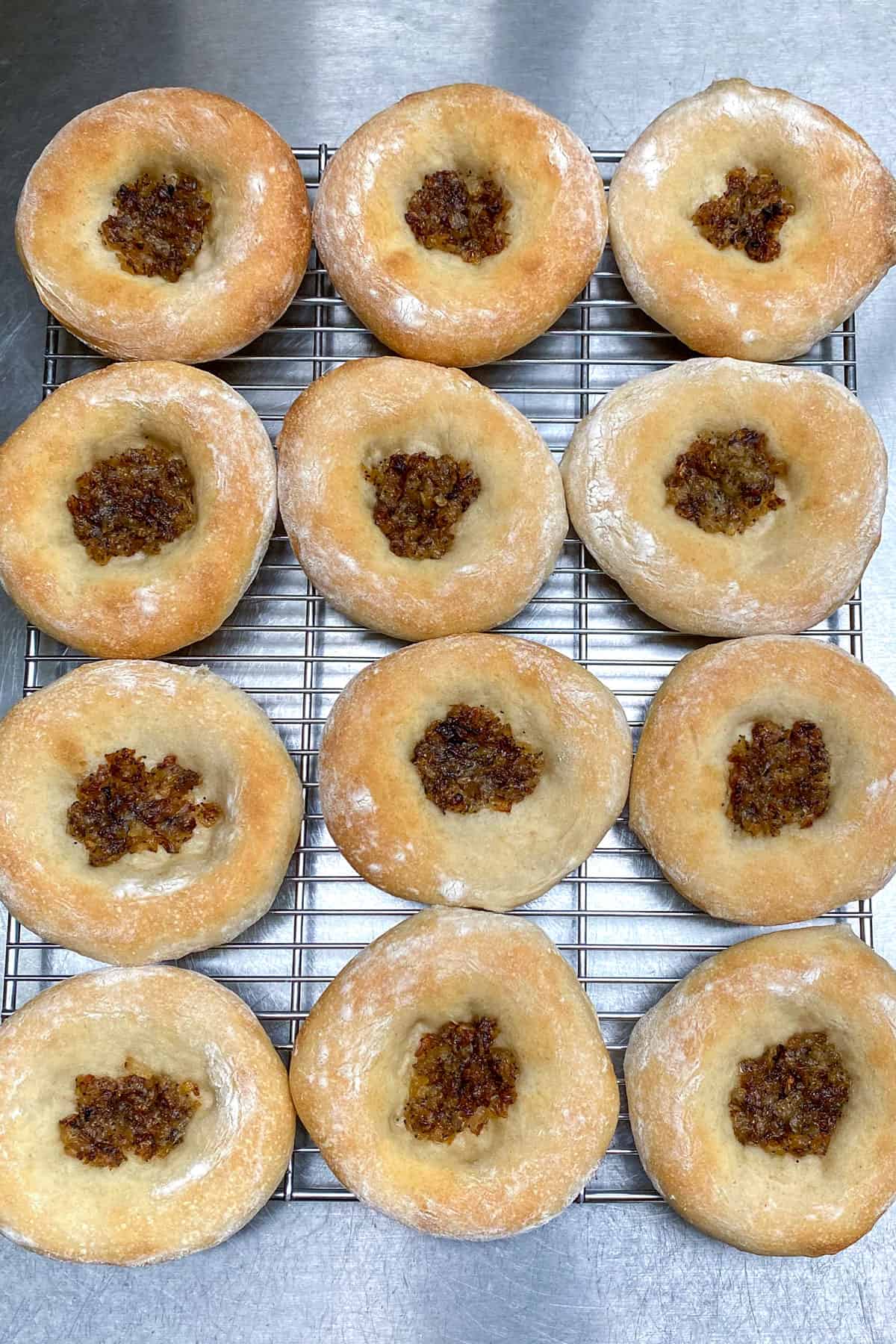 Hi everyone. It’s Eddie, Lisa’s husband, with a guest appearance to present one of my favorite all-time foods: bialys. Bialys have a very special place in my heart - I have been eating them all my life. When my three brothers and I were little boys and my maternal grandparents would come to visit, they would always bring bialys from Brooklyn. I can still remember our excitement when they would pull dozens of bialys out of their “valises” when they arrived.

We would often toast them up right then and there, whatever time of day. My grandpa, who we called Poppy, had immigrated from the city of Siematycze, not far from Bialystock, the birthplace of the bialy. He was a self-styled expert on bialys. I will share Poppy’s instructions for how to spread butter on bialys later in this post. He was pretty pedantic about this, but I have to admit he was right. 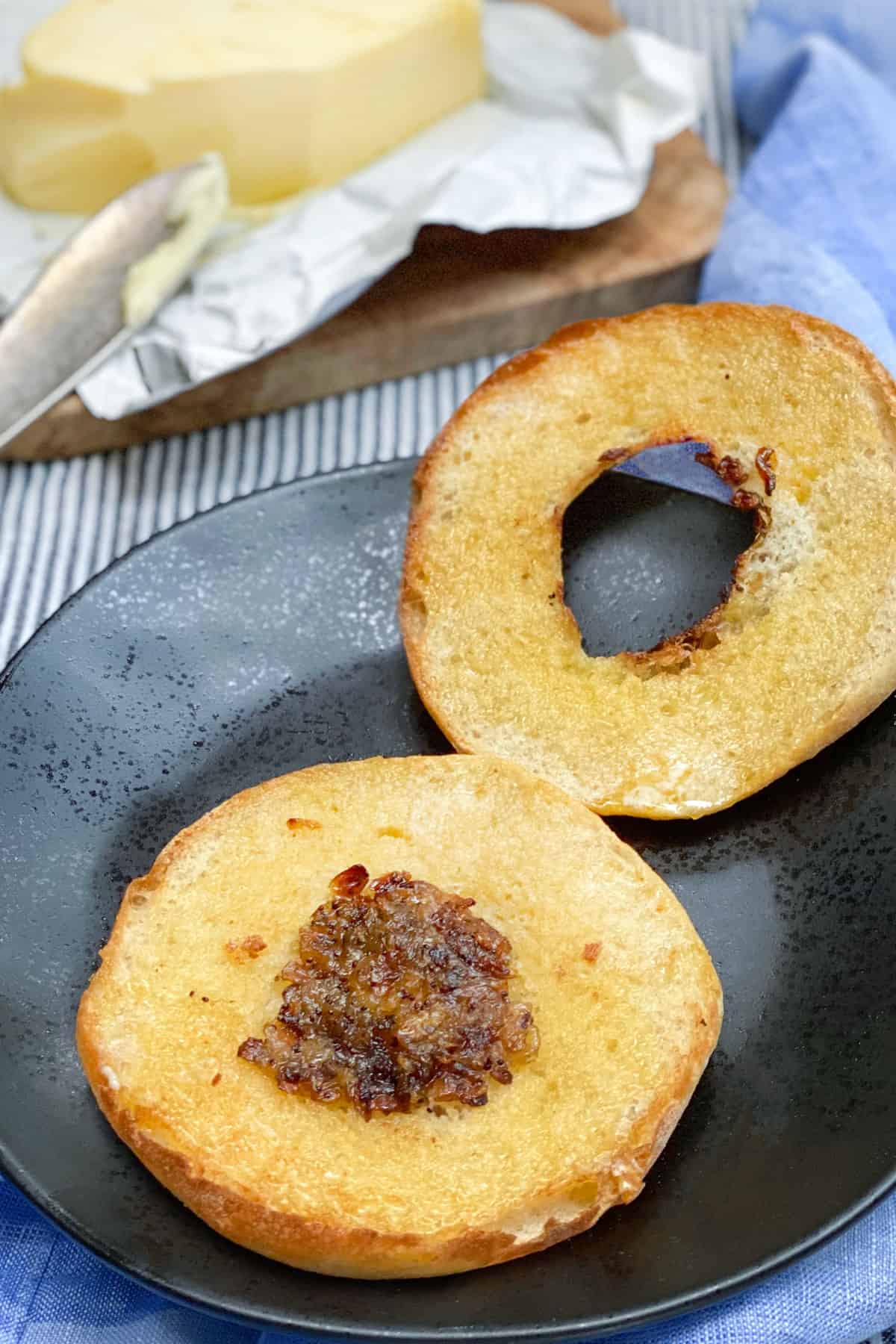 I have been baking bread for 30 years, but it never occurred to me to attempt to make a bialy. Then came the pandemic. Like everyone else and their brother, I got going with sourdough bread baking once it was clear we were going to be in our homes for the long haul. Eventually I decided to give bagels a try. After about two or three batches I got the hang of it. Then my Aunt Phyllis, who became the bearer of bialys after Poppy passed away, suggested I try making bialys. And here we are!

How to Make Bialys

Bialys have “the big four” ingredients that all bread recipes have: flour, yeast, water and salt. There is also a little sweetness added - I use a combination of honey and brown sugar. Finally, the game-changing ingredient is caramelized onions. I find the various steps along the way, kneading, rising, cutting and shaping to be zen inducing. 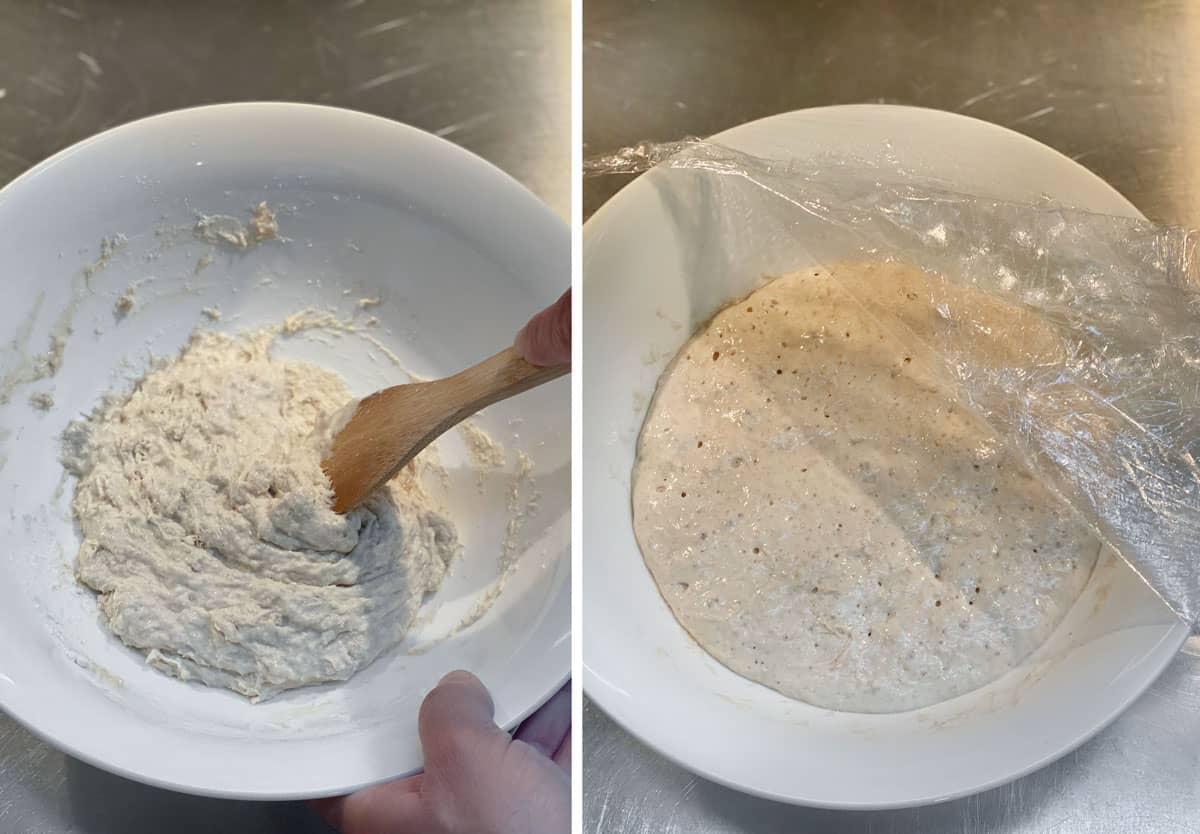 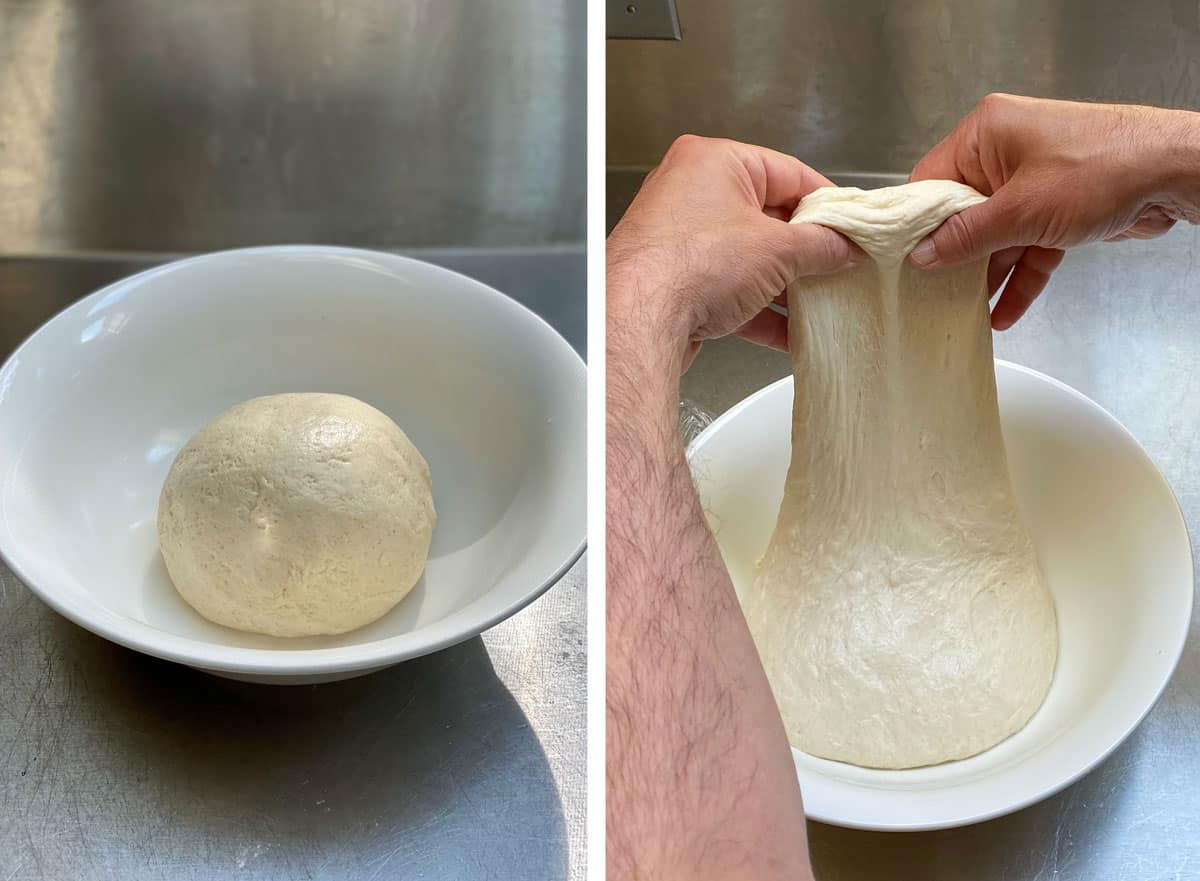 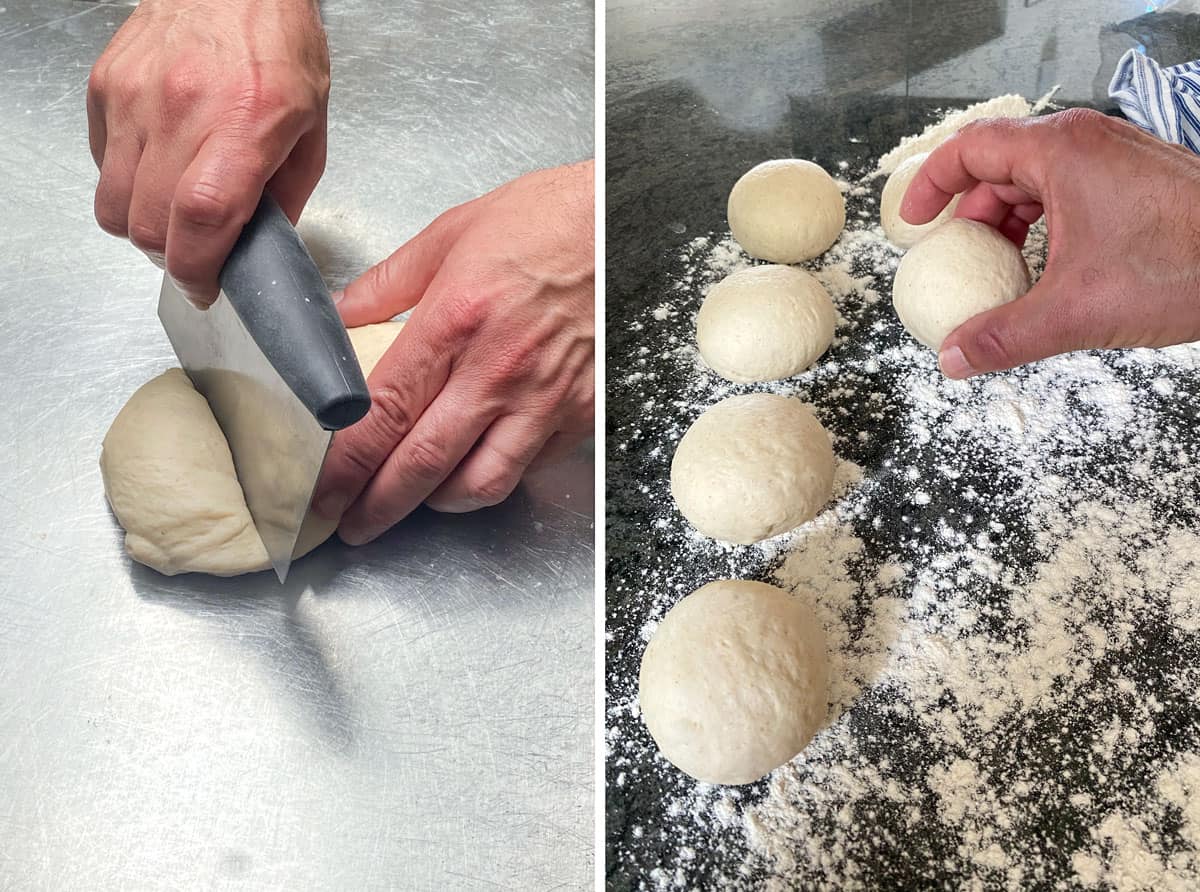 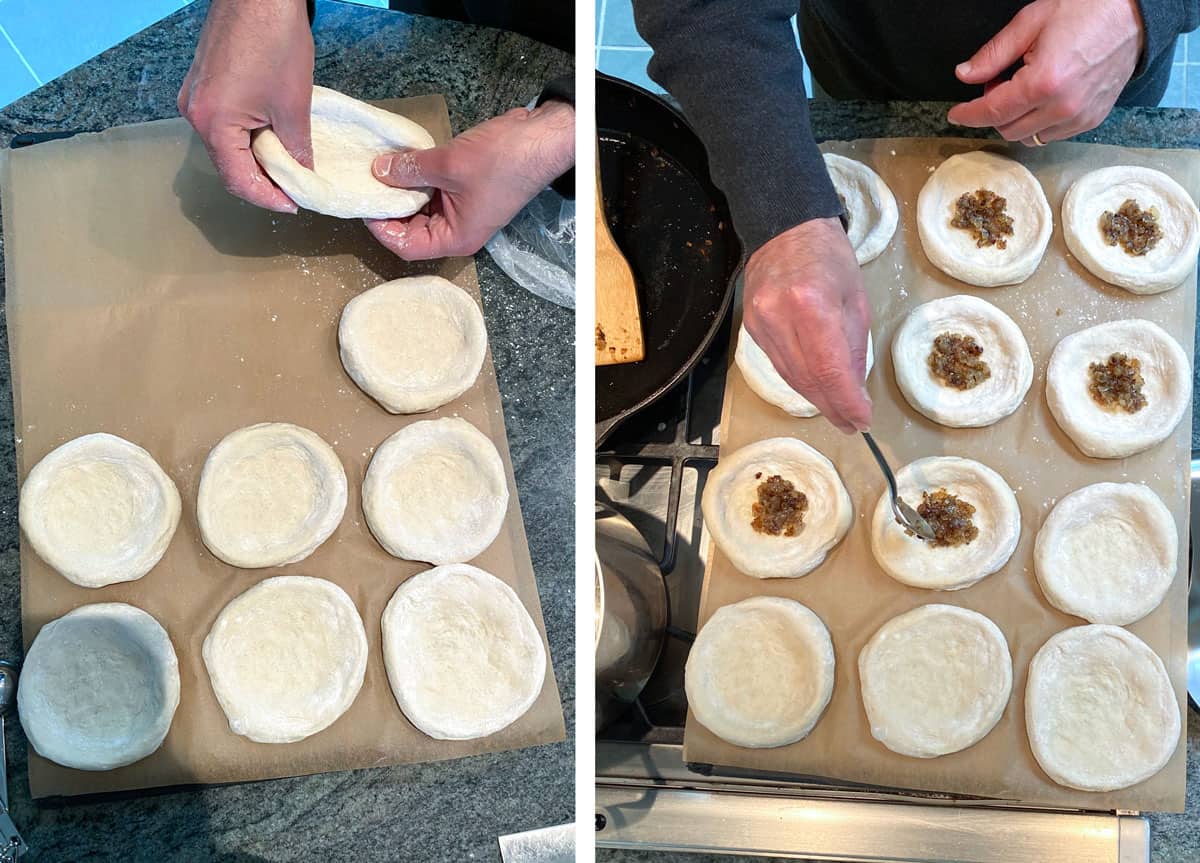 This recipe has come together over time, and represents a “composite character” of several videos and recipes I reviewed along the way, along with some changes I have made via trial and error. My top sources were: Just One Bite Please, The Spruce Eats, and Chef Mark Strausman.

Bonus: Poppy’s instructions for how to butter a bialy

Poppy would often stand around watching with pride as we would toast and eat the bialys he had brought. One time when I was spreading butter, he said “what are you doing? This is not how to butter a bialy.” The butter was still cold from the fridge and I was knifing off one piece at a time and doing my best to spread it while it was still hard. “First you put little pieces of the butter on one side of the hot bialy, then the other”, he told me. “Then when you go back to the first side, the butter is melted and you can spread it easily. Then go back to the other side and do the same thing.” To this day I follow his advice from the Old Country and always think about him when I butter my bialy. Thanks Poppy, for showing me the way - you would be happy to know I have now passed this wisdom on to my own kids.

One more thing: it always seemed a shame to me that there was essentially only one bite of the entire bialy that had the onion filling. The amount of onions in in this recipe is much more generous, allowing you to spread them out so you can enjoy their caramelized flavor in more bites of your bialy. 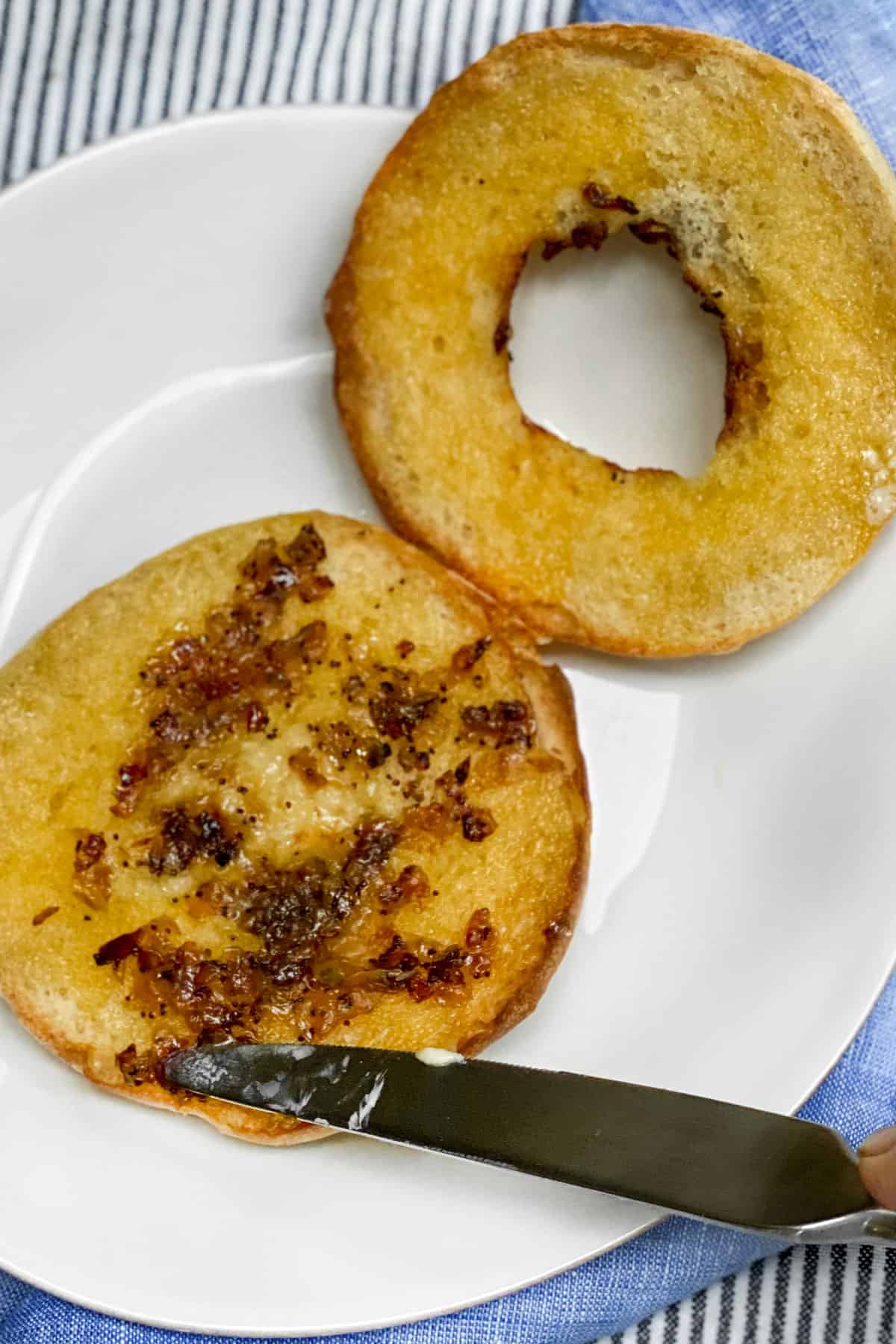 Here's Our Favorite Bialy Recipe. If you try this recipe, I hope you'll come back to leave a star rating and a comment and let Lisa and me know how they turn out. 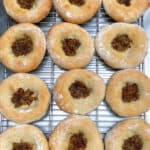 These bialys are as satisfying to make as they are to eat and they are a great way to start your day. The total amount of time you spend actually doing something during the process is less than an hour. The rest is letting the dough rise in its various shapes and forms.

For the caramelized onions