You are here: Home / Bread / No Knead Olive Bread
Jump to Recipe·Print Recipe

This delicious no knead olive bread is my husband Eddie’s recipe but he can’t take credit for the method. For that we can thank Jim Lahey, chef-owner of the Sullivan Street Bakery in New York City. In 2006 The New York Times reported on Jim’s revolutionary new bread baking method, which requires almost no kneading and empowers the home cook to turn out bakery-quality loaves. I always serve this olive bread as an appetizer simply because it’s so good. It comes out of the oven with a perfect crisp crust and is warm and tender on the inside with hints of rosemary and plenty of olives to keep each bite interesting and full of flavor.

Serve it cut into smallish pieces with olive oil and balsamic for dipping. Don’t be daunted by the long prep time. Most of it is just letting the dough sit in a bowl to rise;  the actual hands-on labor is minimal.

This technique is easier to execute and harder to mess up than traditional bread-baking methods and the final product is something to behold. Baking bread is actually not something that I do. I tried once, using the bread machine I got as a wedding gift. On my first attempt I baked the kneading attachment into the loaf. After that I happily turned over the bread-baking to my husband Eddie, who was eager to take it on. The bread machine ended up in one of our garage sales and Eddie started collecting and studying books on the art of bread making. He tried all sorts of types and techniques over the years, hoping to achieve his vision of the perfect bread.

Each time a bread would come of the oven, there was much anticipation. At times Eddie would say “I think this might be “The One.” Over a period of about 16 years there were numerous excellent breads with some nearing perfection. But the family concurred that none had earned the status of being “The One,” so the quest continued. Then, about 6 years ago, The New York Times reported on a revolutionary new bread-making method developed by Jim Lahey of New York’s Sullivan Street Bakery.

The revolutionary part is that the time consuming and challenging kneading process required in traditional bread making is virtually eliminated, and a Dutch oven is used to simulate the environment of a professional bread oven. Eddie played around with that recipe for a while, finally adding olives and fresh rosemary from our herb garden, and one day out of the oven came “The One!” He’s been making no-knead olive bread this way for the past few years and it has been “The One” every time. I hope it is for you too! Here’s the recipe for Eddie’s no knead olive bread. If you make this I hope you’ll come back to leave a review. We’d love to know what you think! 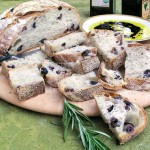 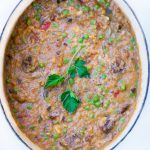