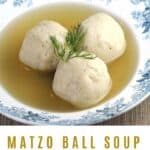 This homemade Matzo Ball Soup is heaven in a bowl. Rich clear flavorful chicken soup with light pillowy matzo balls. This detailed recipe will make it easy for you to cook up a big pot of the absolute best matzo ball soup! 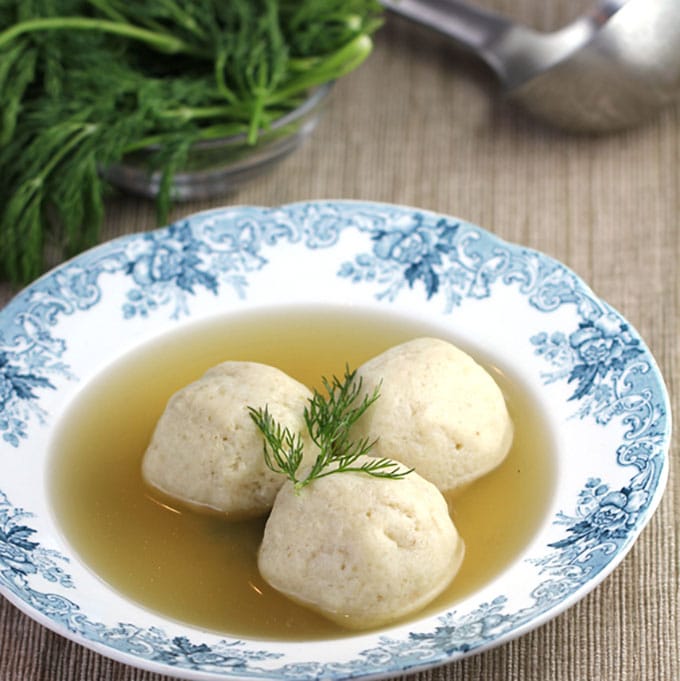 There are a good number of steps involved in making matzo ball soup. It is truly a labor of love but so worth the effort and always a star of the meal. Whenever I make it for a family occasion, the kids at the table (some adults too) request seconds and thirds on matzo balls. I always make extra so I can give them some to take home. My family tells me I make the best matzo ball soup. So here's my recipe. I hope you love it as much as we do! 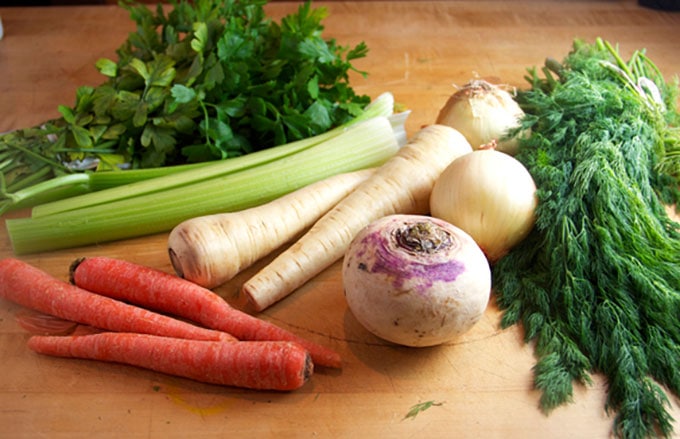 HOW TO MAKE MATZO BALL SOUP FROM SCRATCH

The first thing you want to do is get your chicken soup on the stove and simmering.

If the pot looks overly full, don't worry. As the chicken soup simmers, the greens will shrink and the water will evaporate and everything will fit in the pot nicely. 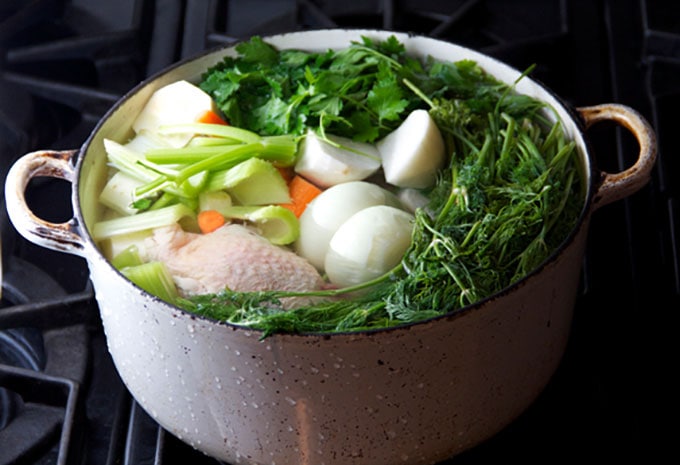 HOW TO MAKE CLEAR CHICKEN BROTH

As the chicken soup starts to simmer, you will notice some white foam floating on top of the broth. The foam, also know as scum, is denatured protein. It won't change the taste of your soup but it will eventually break down into smaller particles that will make your soup look rather dull and cloudy.

The key to making clear chicken broth is to skim off that foam after the first ten minutes of simmering. Use a spoon and scoop out as much of the foam as you can. This step takes a bit of time but I rather enjoy it. The results are well worth the effort, beautiful clear golden broth. 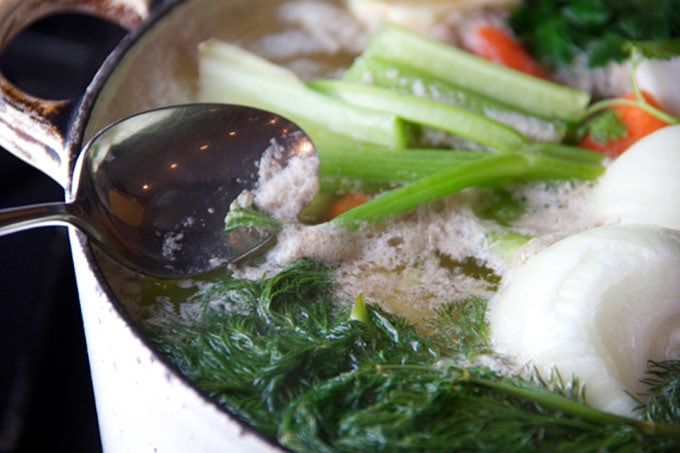 Once your soup has simmered for a good two hours, it's time to strain out all the solids. After you pour the soup through a strainer, you will have a lot of tender chicken to use for another recipe. I often use it to make BBQ Chicken Enchiladas  or curried chicken salad. 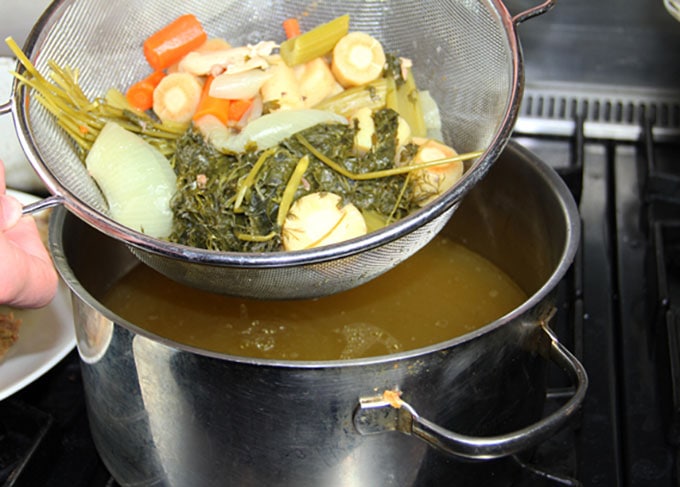 HOW TO MAKE MATZO BALLS

Matzo balls consist of matzo meal (ground up matzo), eggs, oil or chicken fat and salt. It’s a pretty simple formula. There are differing opinions on the ideal texture of a matzo ball.  Some like sinkers – dense and chewy.  Some like floaters – light and fluffy.  It all probably has to do with what you grew up with. I like my matzo balls somewhere in the middle – substantial, but on the light side.

TOP TIPS BEFORE YOU START

Bring a large pot of salted water to a boil. Set a bowl of ice water on the counter near the stove. Dip your hands in the ice water. Scoop a heaping teaspoon of matzo ball dough into the palm of your hand and roll it lightly into a ball. Drop the balls into the boiling water as you roll them. Lower the heat to a simmer. Cover and cook the matzo balls for 45 minutes. 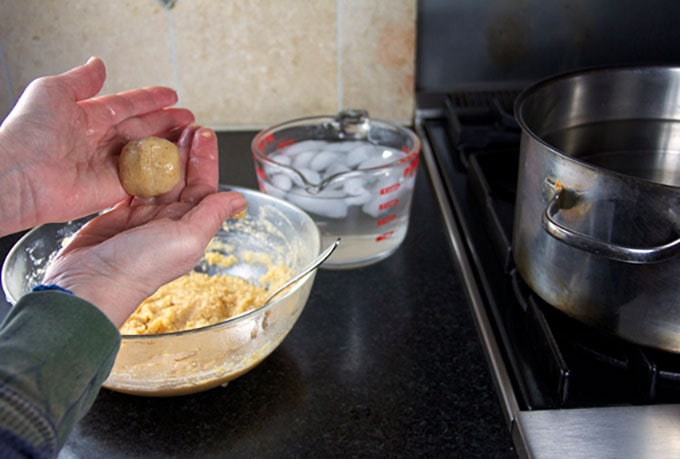 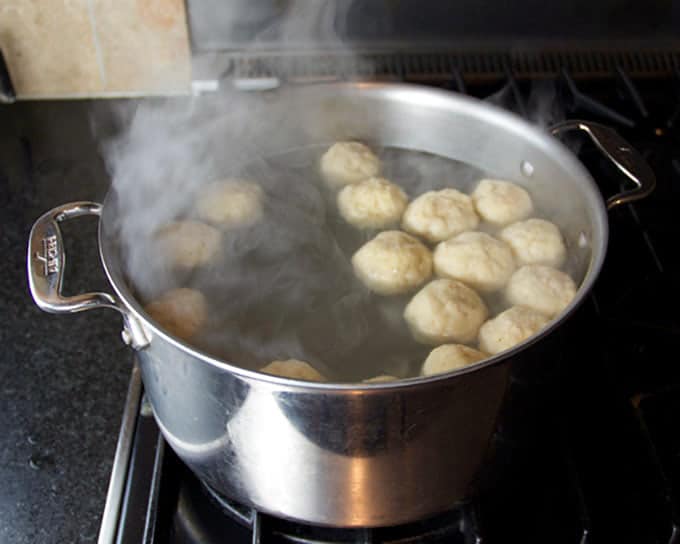 How to Freeze Matzo Ball Soup

The best way to freeze matzo ball soup is to keep the soup and the matzo balls separate and freeze each on its own.

WHY DO WE EAT MATZO ON PASSOVER?

We really can't talk about matzo ball soup without talking about Passover. Matzo ball soup is a Jewish phenomenon. It all started thousands of years ago when the Jewish people enslaved in Egypt were granted freedom. Moses led them out of Egypt in a hurry, afraid that Pharaoh would pursue them. In their haste, there was no time to let their bread rise. Matzo is the unleavened bread that resulted.

Passover is the holiday that commemorates the Jewish exodus from slavery in Egypt and matzo plays a starring role. During Passover, Jews all over the world honor the memory of the exodus by foregoing any leavened foods. When flour and water mix, fermentation can occur, which in turn causes leavening.

Matzo is produced in accordance with very specific conditions that ensure no fermentation. Thus matzo, and its derivative products, are the only flour-based foods allowed during Passover.

The traditional Passover meal, or Seder, often includes matzo ball soup. I usually cook my chicken soup and matzo balls a week early because I have to make a double batch, which takes some time and effort. Plus, chicken soup and the matzo balls freeze well and I love to cross things off the long list of things I have to do to prepare for a Seder.

The next thing I'll make is the brisket, which also freezes well. By the way, if you're undecided about what brisket recipe to use, my long-time favorite brisket recipe ever (and I've tried dozens) is Nach Waxman's brisket. And if you want to bring some exciting Indonesian flavors to the table, try this delicious Beef Rendeng Brisket.

I'm curious if most non-Jewish people have tried matzo ball soup? If it hasn't transcended its Jewish roots, I think it should. It's absolutely delicious and everyone should enjoy it!

Here's the Matzo Ball Soup Recipe. If you try this, I hope you'll come back to leave a star rating and a comment. I'd love to know what you think.