Red beans and rice is a Louisiana classic that’s not to be missed! Luckily, it’s easy to cook at home. Smoky sausage and aromatic vegetables infuse this rich comforting meat and bean stew with tons of flavor as it simmers in spicy broth. Once you try it, you’ll want to make it a regular in your cooking repertoire. 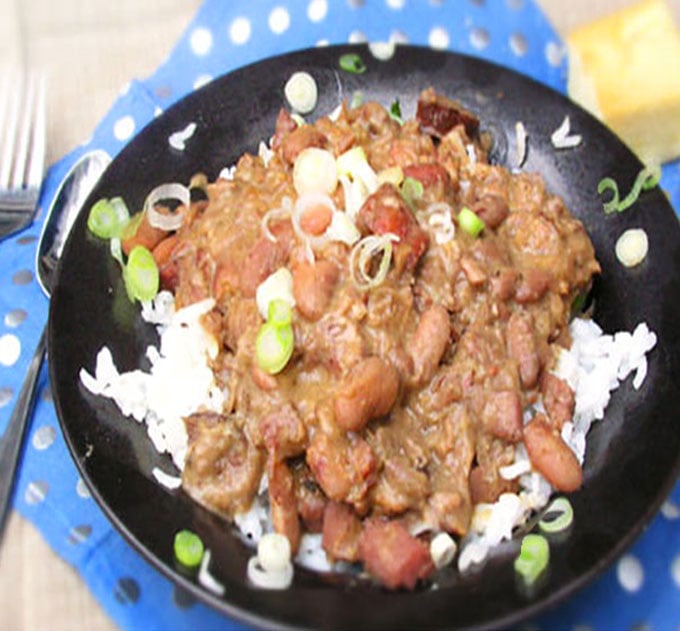 I’m not sure Red Beans and Rice would be in my cooking repertoire if my oldest son had chosen a different college. When he was making the all-important decision, I was totally focused on the education part for him and not so much on how much fun it would be for me and the rest of the family to visit. When your son ends up going to school in New Orleans the perks for the family are big – especially when it comes to food!

When we dropped him off at Tulane freshman year, our whole family flew down to New Orleans five days early to explore the city, starting with a culinary tour of the French Quarter. We ate our way from turtle soup to pralines – a really fun way to learn about the history of a city! As I learned on the tour, the foundation of flavor in Cajun and Creole cooking is created by sautéing the aromatic vegetables. Many countries have their own unique combinations of aromatics to flavor their traditional dishes.

In Latin America they call it a sofrito. In France it’s called a mirepoix. In New Orleans the vegetables used are celery, onions and green peppers, and it is referred to as “the Holy Trinity.” New Orleans is testament to how multiculturalism can translate into amazing food. Red Beans and Rice is an example of Louisiana Creole cooking, which has roots in the cooking customs of the French aristocracy that settled in New Orleans at the turn of the 18th century, merged with the vast and varied ingredients and techniques brought by settlers from other lands, including Spanish, German, Native American, African, and Italian. Spaniards brought peppers and spices, Germans brought sausages and delicious baked goods, the Native Americans grew corn and beans, Africans brought Okra and so on. There are so many wonderful foods that New Orleans has made famous, but there’s something simple and wonderful about a smoky, creamy, meaty pot of red beans and rice. It’s a perfect comforting stick-to-your ribs winter dish. It doesn’t look fancy but the flavors and textures are exciting. Speaking of exciting, New Orleans will very soon be buzzing with the excitement of Carnival season, starting on January 19 with the first parade, and culminating with Mardi Gras (or “Fat Tuesday”), the last day of the Carnival season, on Tuesday February 12th. To add to the fun, smack in the middle of all of the Carnival hoopla, is Superbowl XLVII, which takes place on February 3rd in New Orleans.

If you aren’t able to hop a flight to New Orleans for all of the festivities, at least cook up a pot of red beans and rice for the big game. You’ll be communing with lots of other folks in New Orleans who will also be enjoying this traditional Mardi Gras fare.

Here’s the recipe for Red Beans and Rice. If you try this recipe, I hope you’ll come back to leave a rating and a comment. I’d love to know what you think! 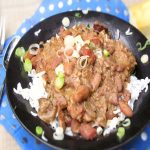