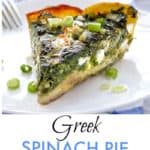 This Greek spinach pie can happily take center stage at a vegetarian lunch or dinner. Inspired by traditional spanakopita, this spinach feta pie is gluten-free and it's all cooked in one skillet. A crust of golden sautéed potatoes encases the filling of spinach, onions, garlic, eggs, herbs and feta. 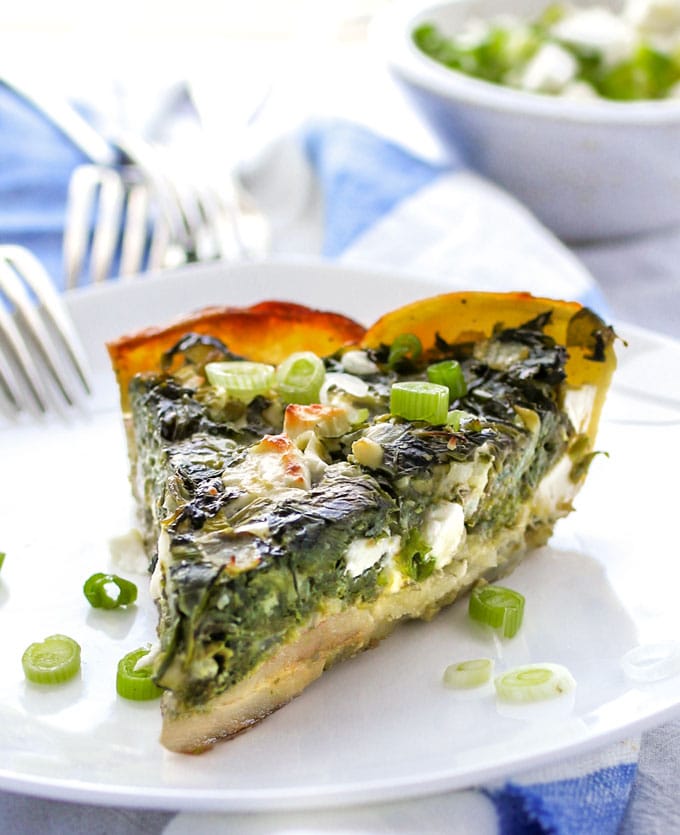 If you're like me and you love to find delicious ways to eat huge amounts of vegetables, you'll appreciate this recipe. The crust has no flour. It's purely potatoes. The veggie-intense filling has a full two pounds of fresh spinach, one of the world's healthiest foods.

The spinach is wilted in the pan with onions, garlic and butter, then mixed with fresh dill, sliced green onions and feta. All that savory goodness is baked in a golden brown potato crust. 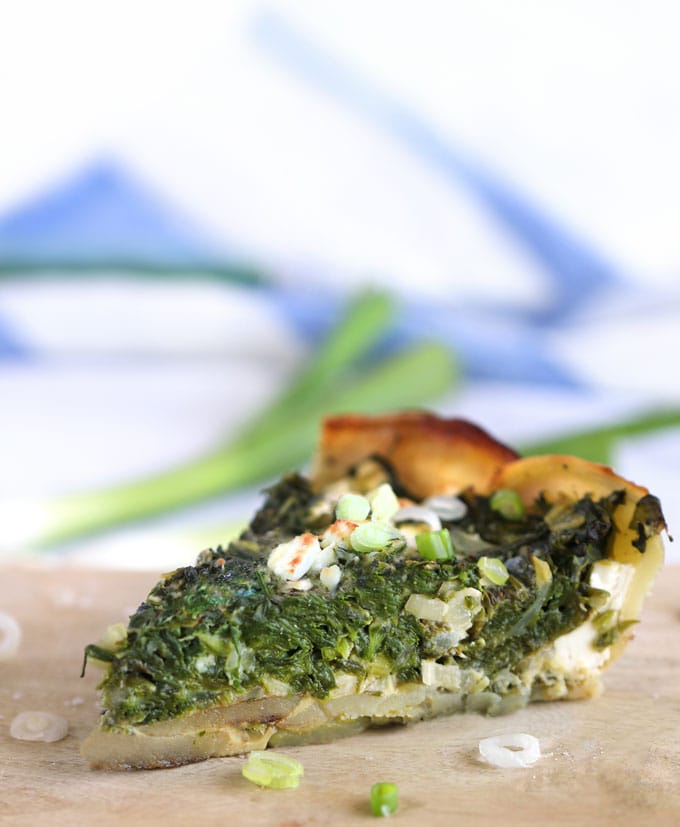 This Greek spinach pie is inspired by traditional spanakopita, made with a very similar filling but a totally different crust. I love crisp buttery phyllo dough but for many reasons, I decided to go with potatoes for this recipe.

First: I wanted to develop a gluten-free spanakopita recipe because I know SO many people who are not eating gluten these days. Second: working with phyllo is a bit tricky. The third and biggest reason: I LOVE potato crusted savory pies. 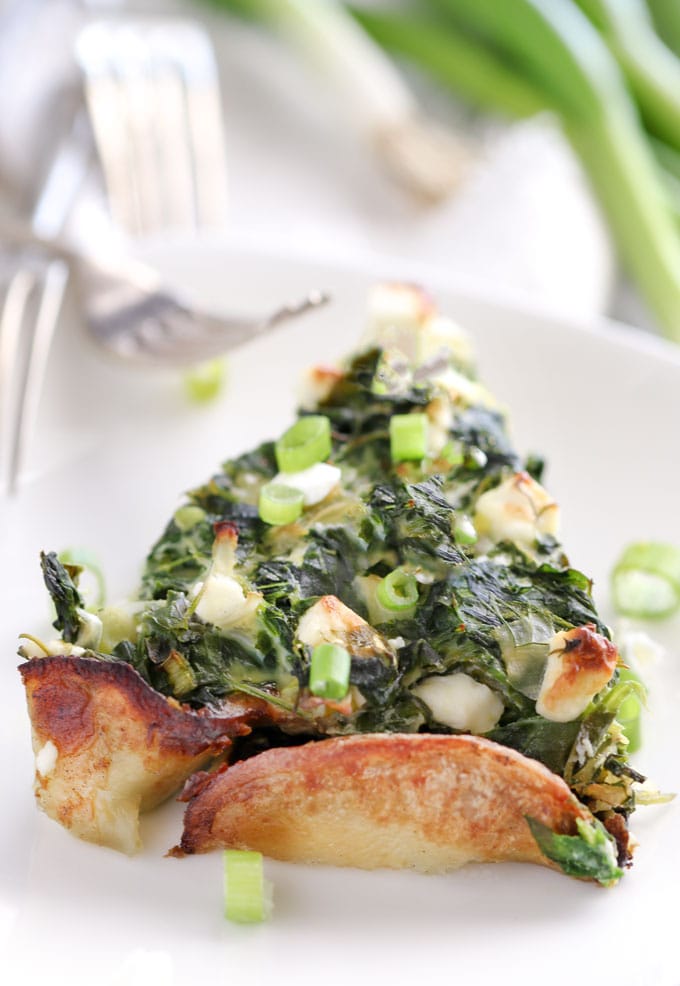 In fact, when I let my kitchen fantasies run wild, my thoughts go to dishes like this cauliflower gruyere pie with potato crust and bacon parmesan crumb topping that I created for a special pie event. And this muffin tin version that I developed for the Idaho Potato Commission: Mini Cauliflower Tarts with Potato Gruyere Crust. And this Healthy Spicy Shepherd's Pie recipe with ground turkey, loads of veggies and delicious spices, and olive oil mashed potatoes.

HOW TO MAKE GREEK SPINACH PIE IN POTATO CRUST

Slice the potatoes thinly with a sharp knife or mandolin. Sauté them in batches, for two minutes per side. Set them on a paper towel lined plate and season them with a little salt and pepper. (try to keep a better eye on them than I did so they don't burn). 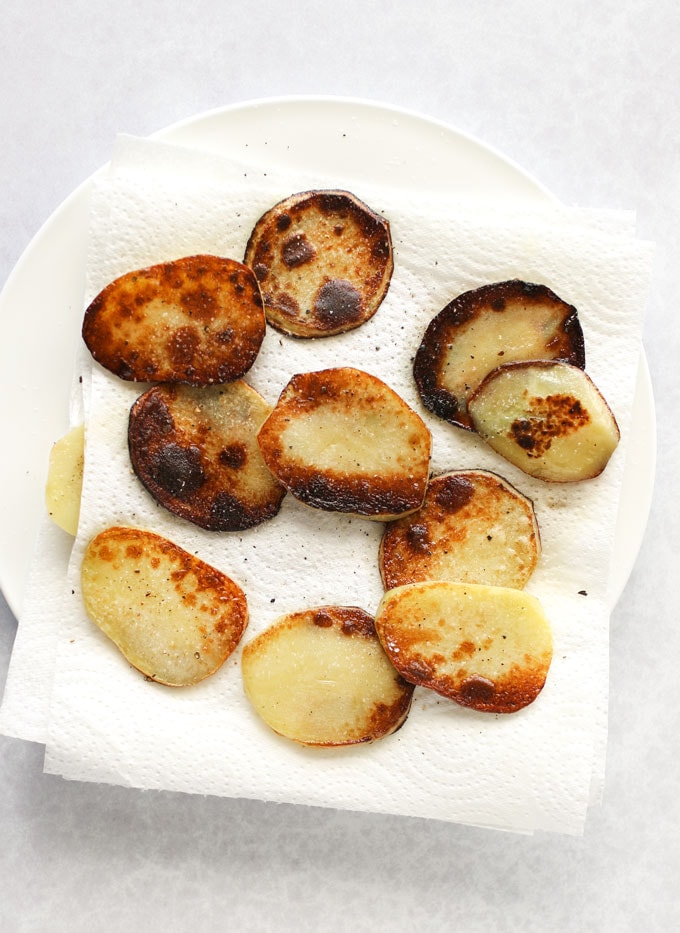 Wipe out the skillet you used for the potatoes. Melt some butter in it and cook the onions and garlic until translucent. Add chopped spinach, a few handfuls at a time, and toss in the pan until wilted.

Transfer the spinach mixture to a large bowl. Pour off excess liquid. Cool for a few minutes, and mix with the rest of the filling ingredients: chopped dill, sliced scallions, cubed feta, whisked eggs, salt, pepper and a pinch of nutmeg (optional). 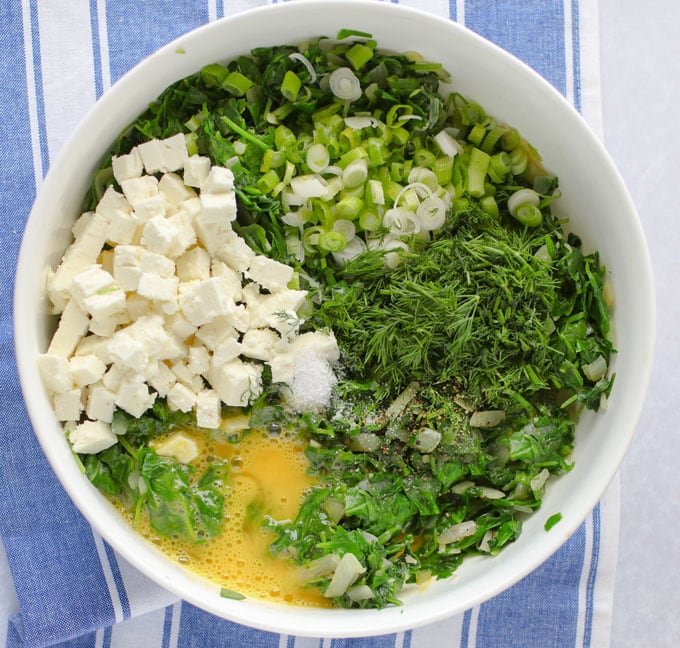 Line your skillet with the sliced sautéed potatoes, overlapping them slightly, to form a crust. 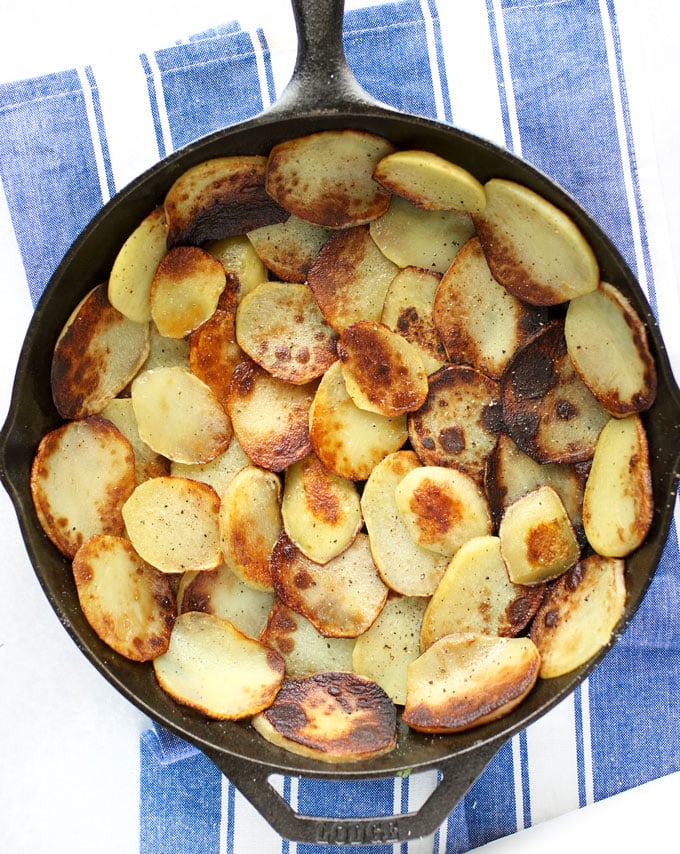 Add the spinach feta filling and use the back of a spoon to even it out. 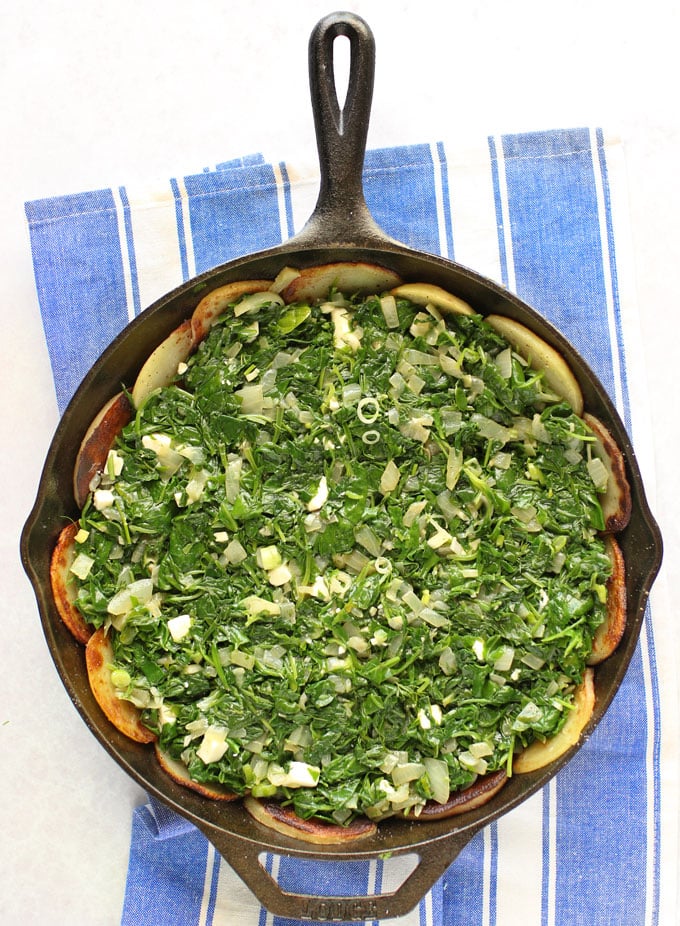 Cover with a lid or foil and bake for 20 minutes. Remove the lid and continue to cook for 20 minutes more until the filling it set and there are crisp brown edges on the potatoes. 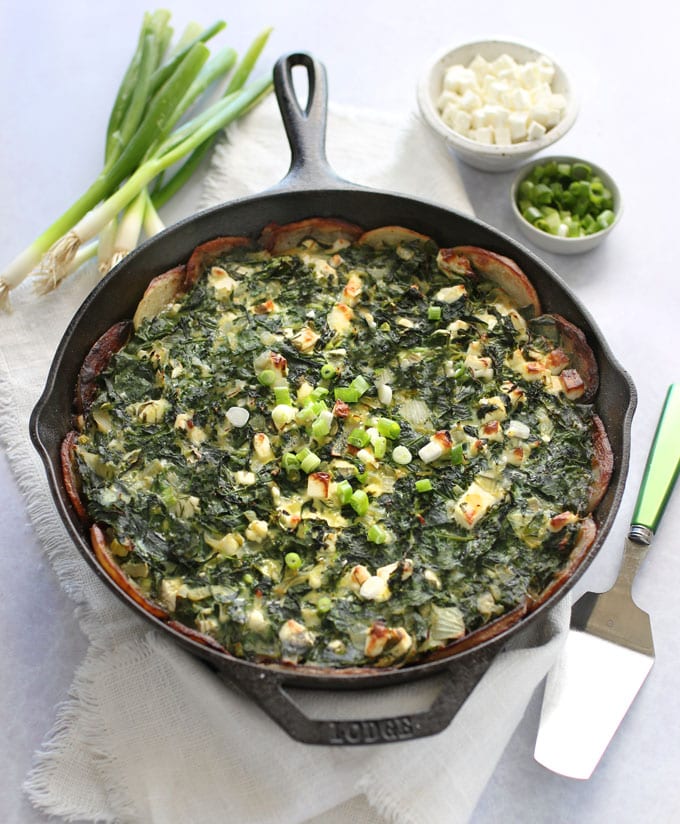 Slice your Greek spinach pie into eight wedges. Serve it warm or at room temperature. For garnish, add a sprinkle of chopped scallions or crumbled feta or both. 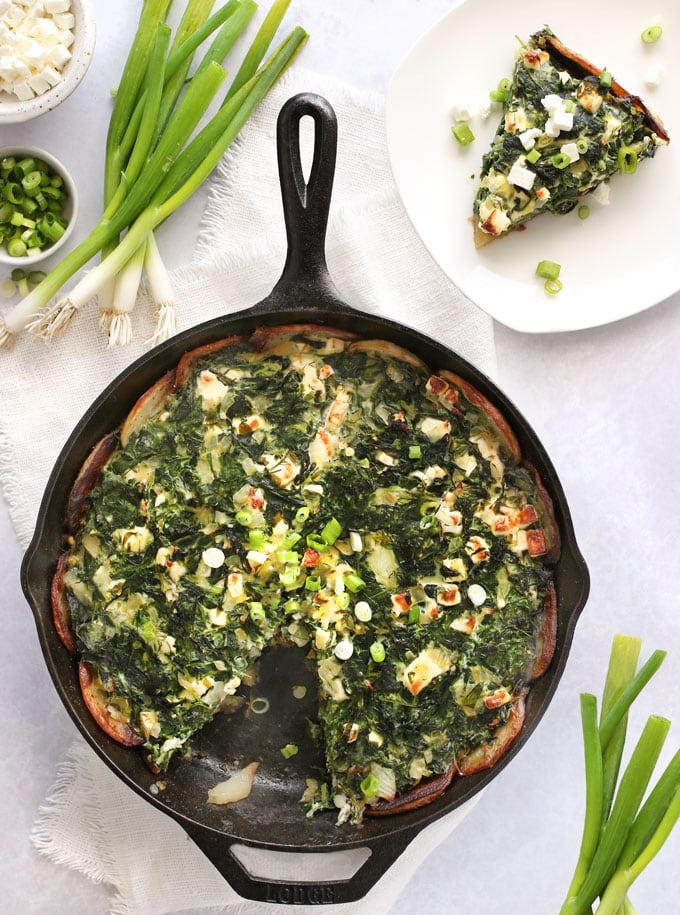 I love serving Greek spinach pie with this  butter lettuce salad with citrus honey vinaigrette  on the side. 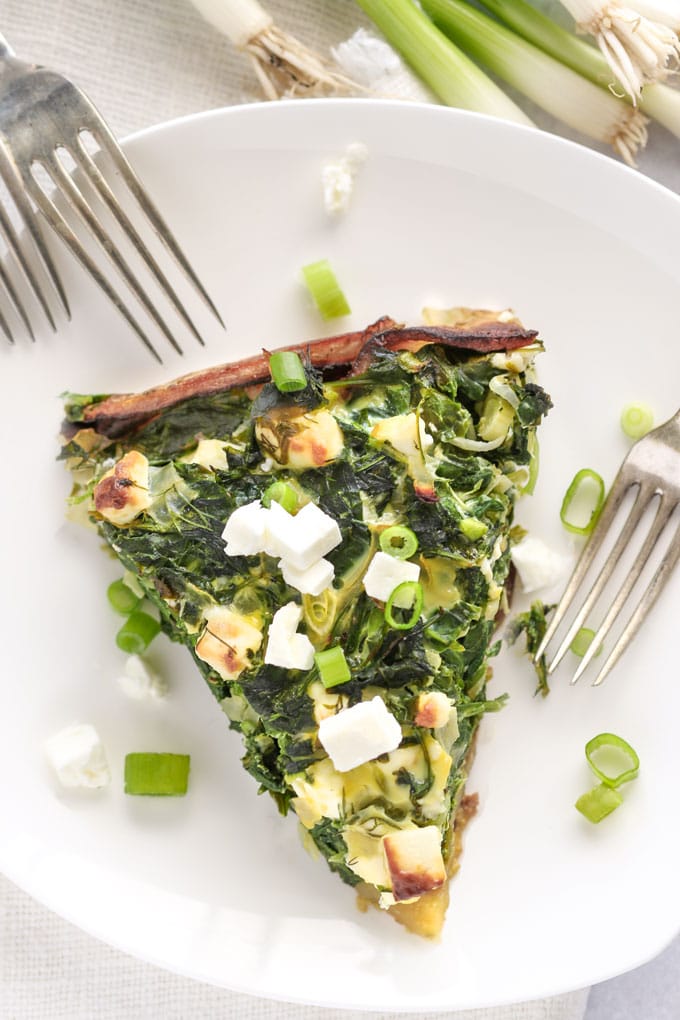 For more crave-worthy vegetable recipes, check out my Pinterest board: Exceptional Vegetables.

Here's the recipe for Greek Spinach Pie In Potato Crust. If you try this recipe I hope you'll come back to leave a star rating and comment. I'd love to know what you think.

A crust of golden sautéed potatoes encased a filling of spinach, onions, garlic, eggs, herbs and feta in this delicious Greek Spinach Pie. The recipe is all cooked in one skillet that goes from oven to table. It's vegetarian and gluten-free.

How to thinly slice potatoes for the crust: I like to slice the potatoes by hand with a very sharp knife. If you have a mandolin slicer, that will work well too.

How to make this with frozen spinach: Use 20 ounces of frozen spinach for this recipe. To defrost, place the frozen spinach in a mesh colander and run lukewarm water over it until the ice melts. Squeeze most of the water out of the spinach by pressing it against the colander. After you sauté the garlic in step #2, add the spinach and toss it with the rest of the ingredients, to combine and heat the spinach. Continue with the recipe as written.