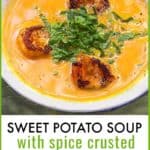 This creamy sweet potato soup is made with coconut milk and flavored with lime juice and a kick of cayenne. The smooth citrusy tropical flavored broth pairs beautifully with the zesty spice-crusted shrimp that float on top. A sprinkle of fresh slivered spinach adds an elegant finishing touch. 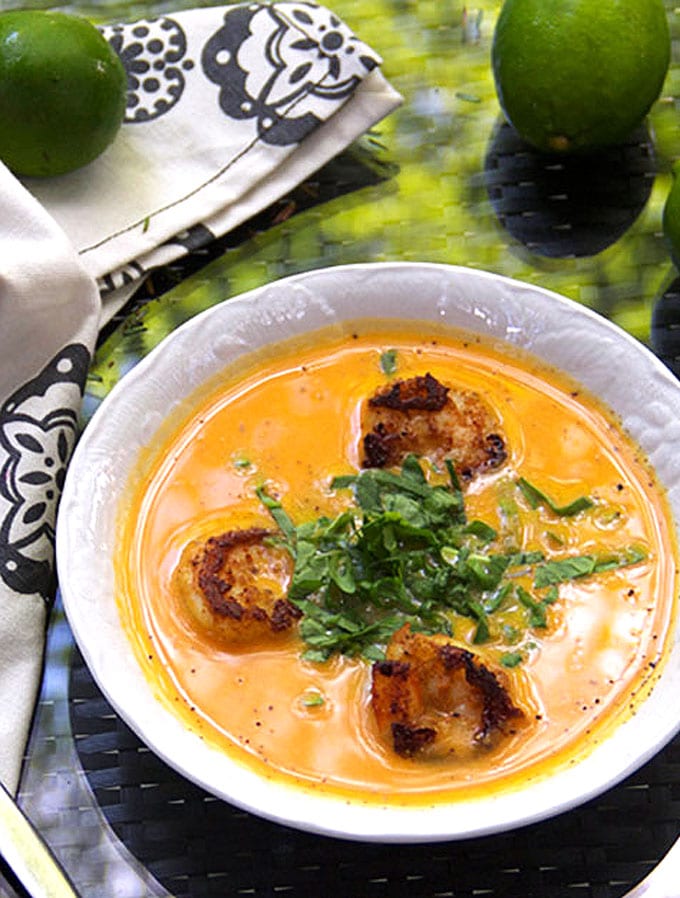 This sweet potato soup recipe is inspired by a small island nation in the South Pacific called Vanuatu. When people ask me what my food blog is about, I tell them that my mission is to find great recipes from every country in the world, and their next question is usually: "how do you find the recipes?"  There's no simple answer to that question. Sometimes I'll share one of my long-time favorite recipes. Other times, I get inspired by a recipe I find in a cookbook or a magazines or on another blog.

Occasionally I get out of the house and actually travel somewhere and discover an exciting dish in a restaurant. Often I look at a list of all the 196 countries of the world, pick one randomly, and start researching it. That was the case with Vanuatu. 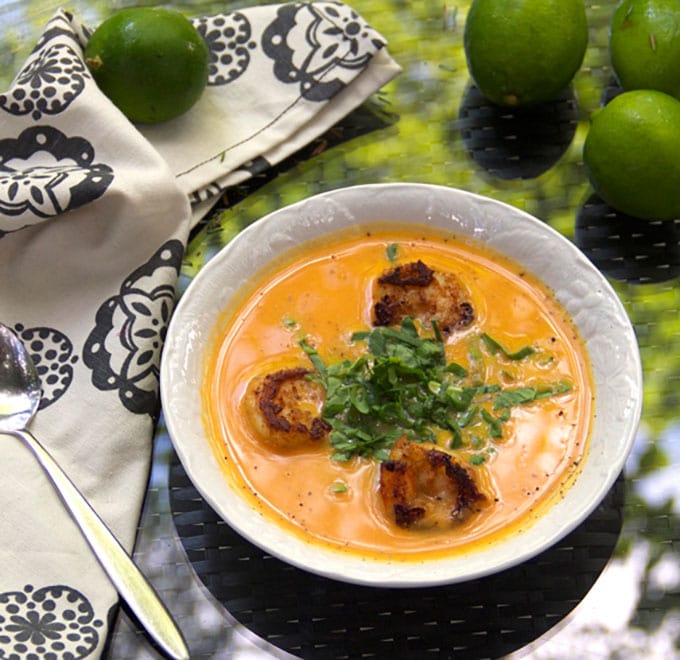 Sometimes a country's national dish will interest me. But Vanuatu's national dish, called Lap Lap, is way too labor intensive. It starts with the difficult task of pounding taro root into a paste, and that's just the beginning - the rest involves layers of cabbage and meat and a banana leaf - and my research tells me that Lap Lap is not a dish that everybody loves.

What got me excited about Vanuatu cuisine was thinking about how to combine the popular local ingredients to come up with something fun and tropical. Coconuts are their largest agricultural commodity. Coconut milk is used to cook almost everything. Sweet potatoes and yams are also an abundant and popular year-round crop.  Since Vanuatu is an archipelago, consisting of over 80 islands, there's no shortage of fish and seafood available.  So there you have it - the inspiration for Coconut Sweet Potato Soup with Spicy Shrimp from Vanuatu. 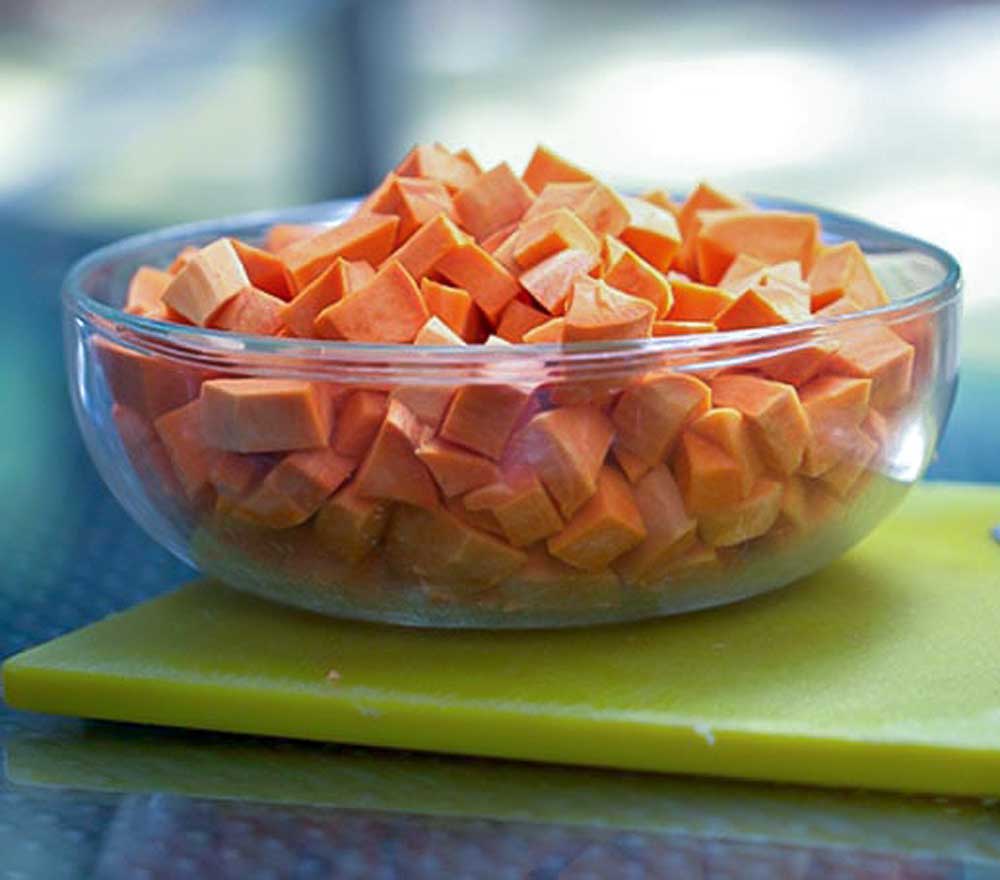 The people of Vanuatu are called Ni-Vanuatu. It is an extremely diverse culture with over 112 different languages spoken on the islands. In fact Vanuatu is the most language-dense country in the world. But in addition to their unique languages, the majority of the Ni-Vanuatu share a common language called Bislama. It's a form of Pidgin, based on English vocabulary.  But the language has taken on a life of its own, due to traders traveling around the Pacific, picking up bits and pieces of dialect and grammar from here and there. TripAdvisor has a good explanation of the language with some interesting examples. 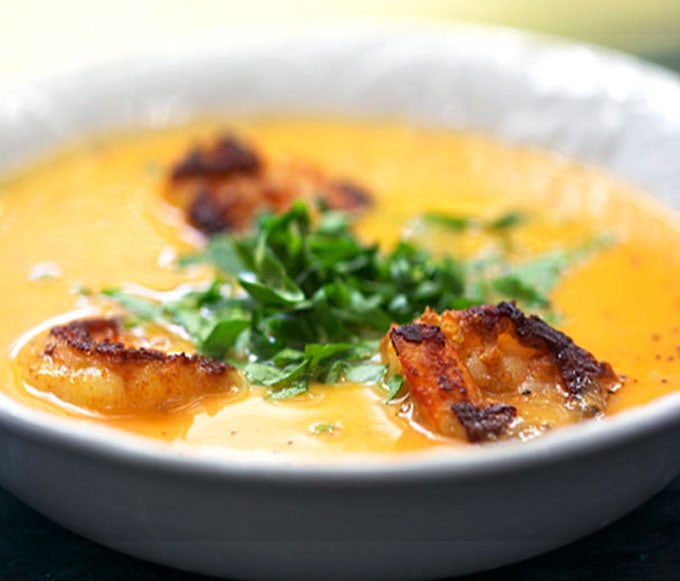 Here's a phrase of the language to give you a sense of it: I am very happy in Bislama is mi glad tumas (me glad too much).  That's how I'm feeling about this soup!

Here's the recipe for Coconut Sweet Potato Soup with Spice Crusted Shrimp. If you try this recipe, I hope you'll come back to leave a star rating and a comment. I'd love to know what you think!

For The Spice Mix