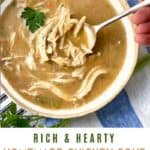 This rich Homemade Chicken Soup is made from scratch with a whole chicken, fresh vegetables and herbs, simmered low and slow so the chicken is extra tender and the veggies are perfectly cooked. At the end, the soup vegetables are pureed into the broth, making it thick and creamy without cream or dairy. The chicken is shredded and added in, yielding a supremely nutritious and satisfying chicken soup. 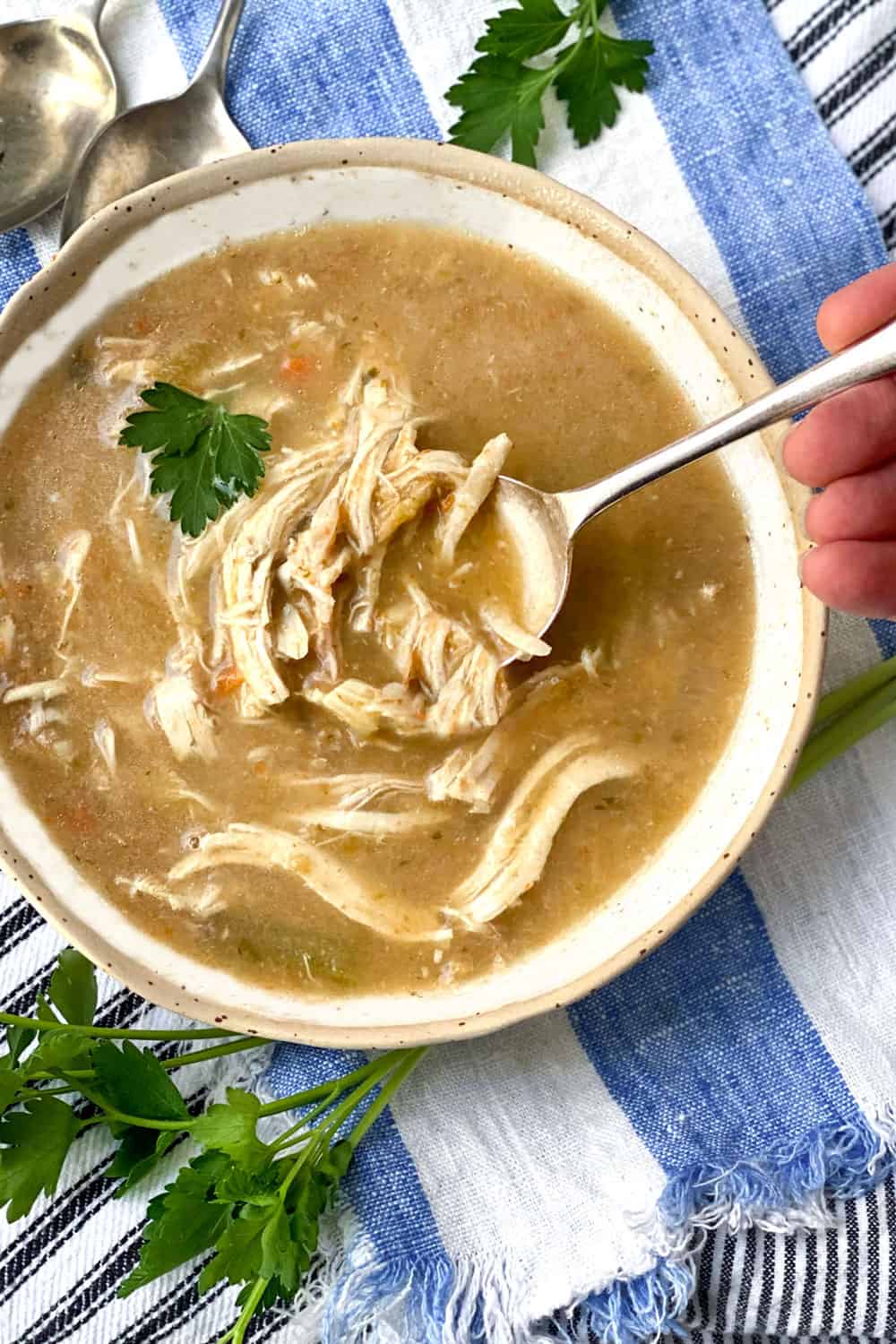 If you've never made chicken soup from scratch, you might suspect it's difficult to do and not worth the effort, but it's actually one of the easiest recipes I know. In fact, after you've made homemade chicken soup from scratch once, you probably won't need the recipe next time. 'You just throw a chicken in the pot,' as my maternal grandmother used to say. There's actually a bit more to it than than that, but not much.

Homemade chicken soup was part of the fabric of my childhood. My grandmothers on both sides (Russian and Hungarian) made it for the Jewish holidays and, of course, when anyone was sick. Their mothers and grandmothers before them made it, going how far back I'm not sure. But I'm pretty certain making chicken soup is programmed into my DNA because I feel like I'm performing an ancient family ritual whenever I do it.

This homemade chicken soup recipe starts out exactly the same way as classic chicken soup, using a whole chicken, root vegetables, celery and fresh herbs.  However, instead of straining out the vegetables to create a thin clear chicken broth, this recipe calls for pureeing all those tender herbs and sweet vegetables right into the broth, creating a rich thick creamy flavorful soup, loaded with tender shredded chicken.

Classic chicken soup is great when you want a rich clear broth for adding matzo balls or noodles to, but when you want chicken soup that's hearty enough to be a meal by itself, this one will do the trick. It's the epitome of comfort and deliciousness.

Listed below are the standard basic ingredients for making chicken soup from scratch. It never hurts to add more herbs. If you like the flavor of dill, throw in a bunch, roughly chopped.  The reason for using white pepper over black is mostly because white pepper allows for a clearer broth, without black flecks. But either type of pepper will do in this recipe. 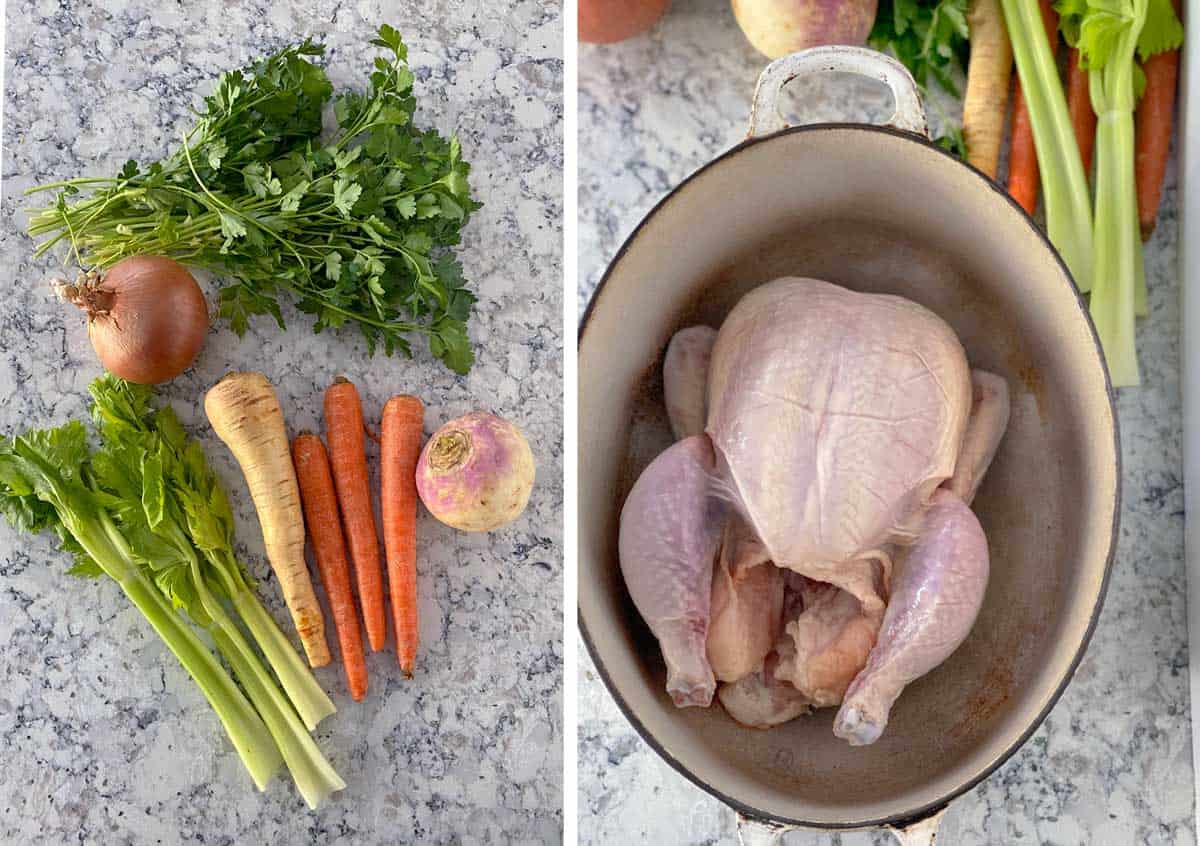 HOW TO MAKE RICH HOMEMADE CHICKEN SOUP FROM SCRATCH

You'll need a large pot with a lid, that holds at least 6 quarts. You can use a Dutch oven or stock pot.

Important tip: Extremely gentle simmering is the key to tender chicken and will also ensure that the soup veggies are not overcooked or mushy. 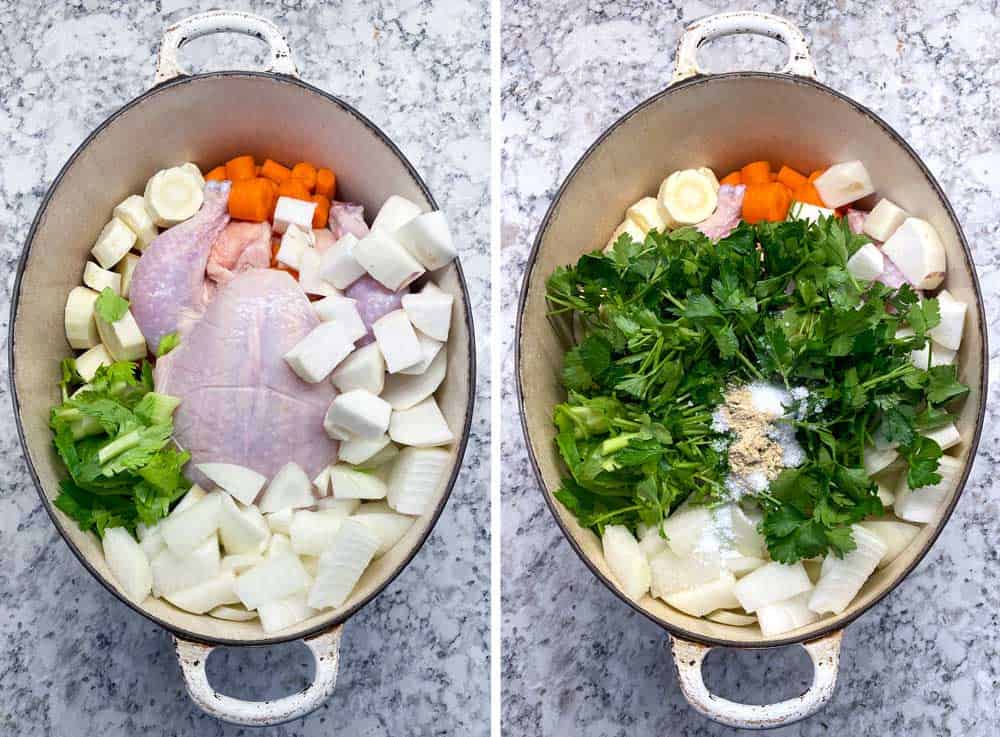 Once the chicken soup has finished simmering, the broth will be rich and flavorful, the chicken will be tender and falling off the bone, and now it's time for the finishing touches, shredding the chicken and pureeing the soup vegetables. 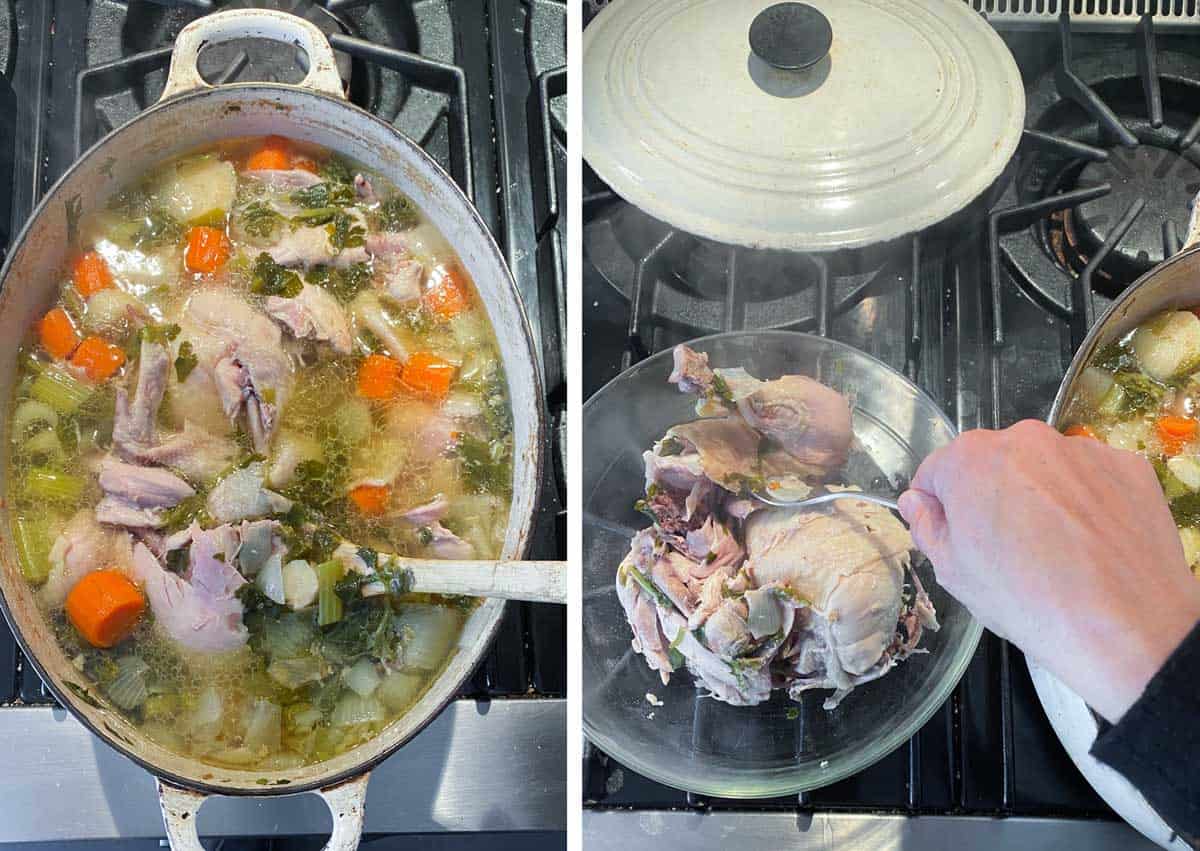 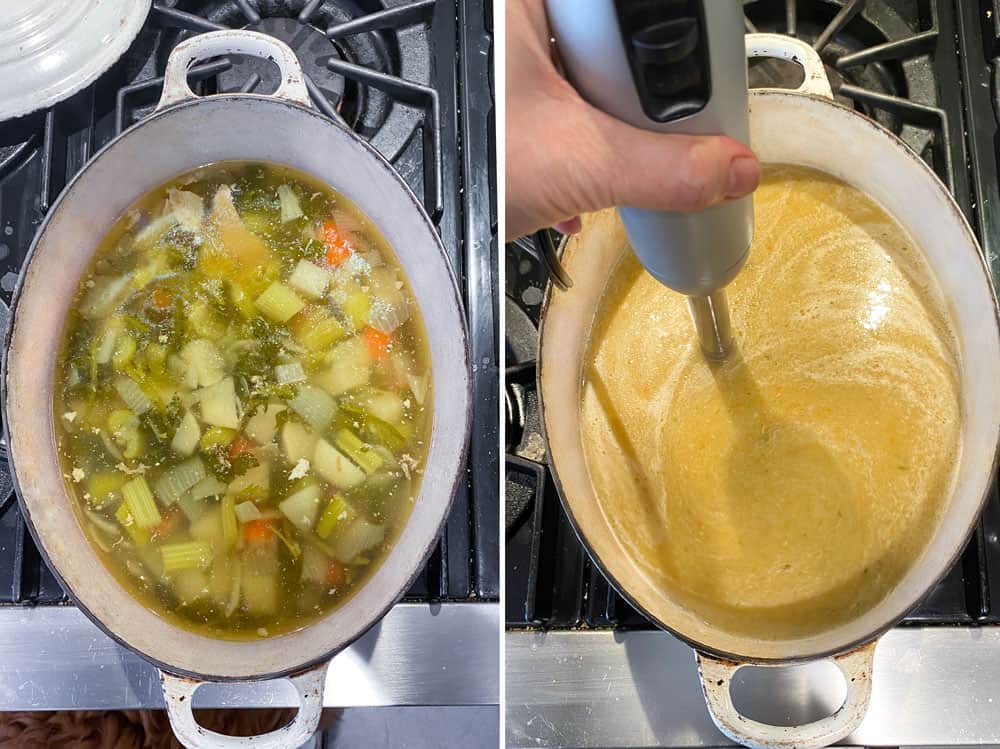 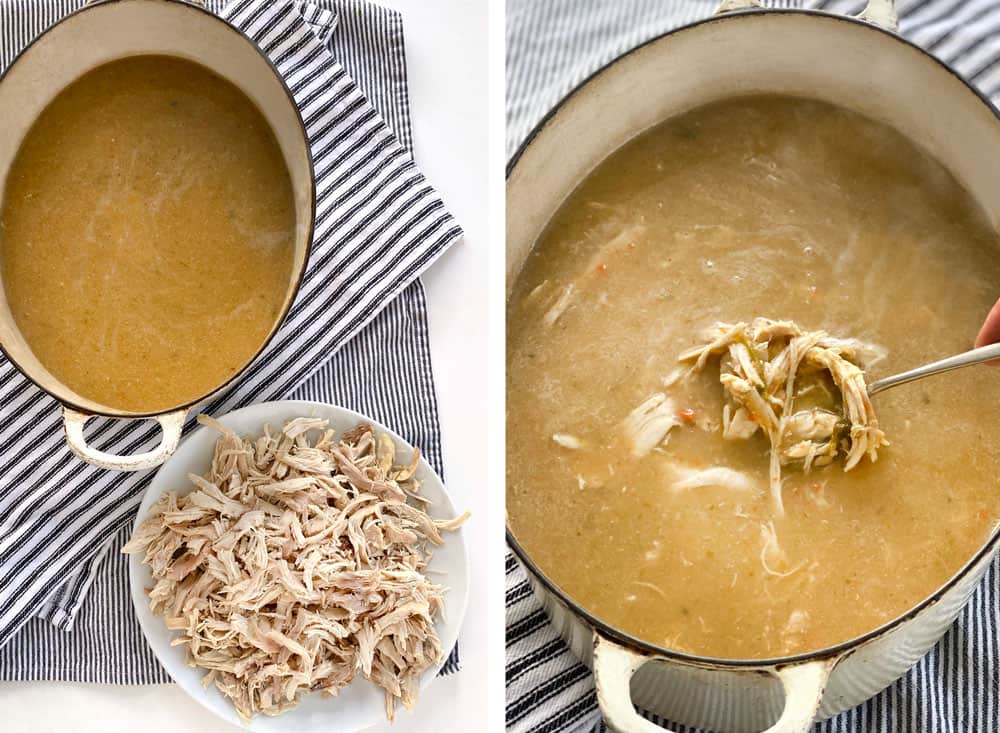 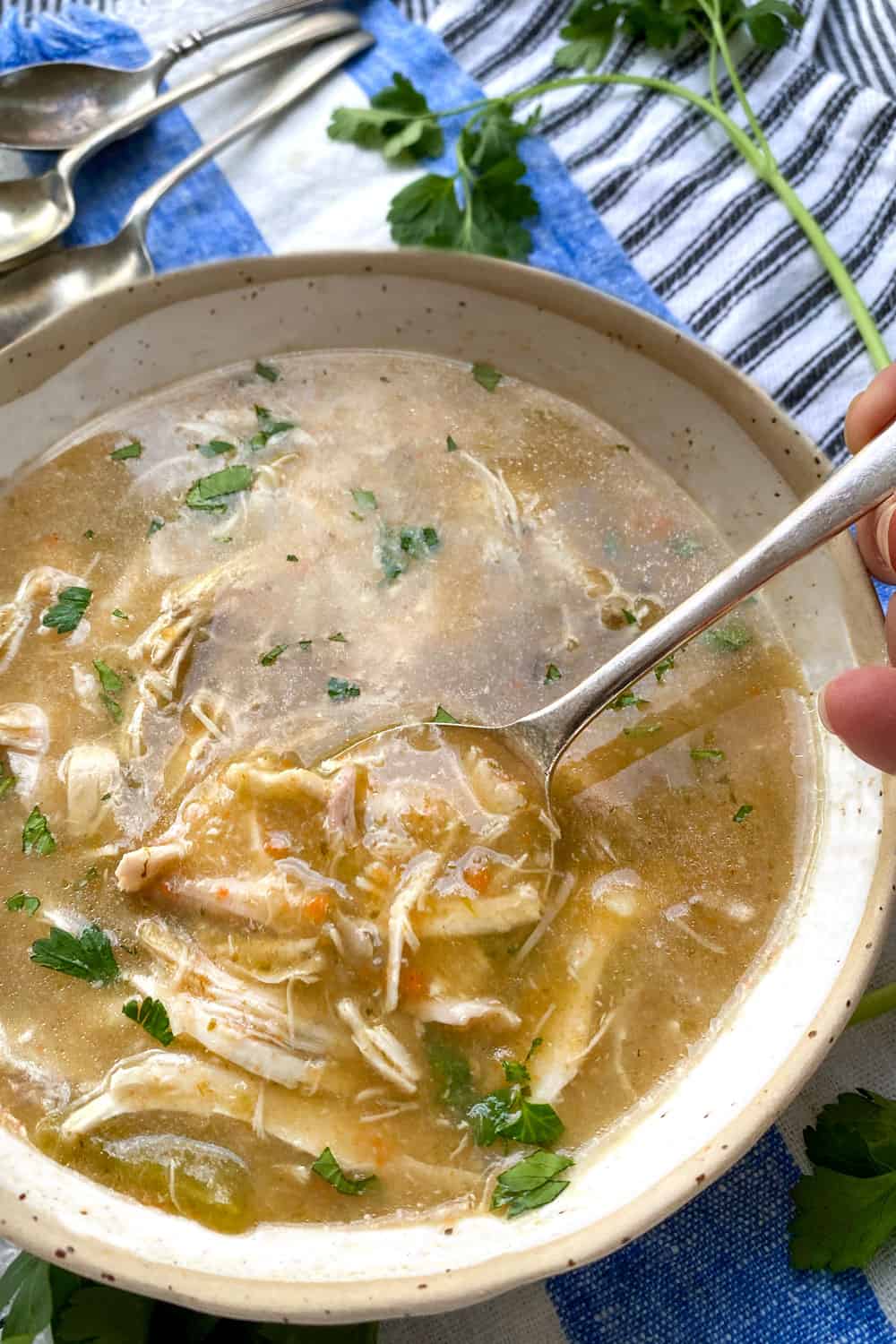 Here's the homemade chicken soup recipe. If you try this recipe, I hope you'll come back to leave a star rating and a comment. I'd love to know what you think.

A whole chicken is simmered low and slow with vegetables and herbs; the vegetables are pureed into the broth and the tender chicken meat is removed from the bones, shredded and returned to the pot for a supremely rich and satisfying chicken soup.

Substitution For Turnips: A rutabaga is a great substitute for a purple topped turnip. They are a bit sweeter and add wonderful flavor to chicken soup. Peel or slice off the dark waxy skin and cut the flesh into large chunks. Use about 2 cups of cubed rutabaga.