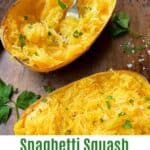 Most of us think of spaghetti squash as a healthy substitute for pasta. It is. But what you may not realize is how delicious spaghetti squash can be when it's cooked in a way that brings out its best al dente texture and sweet nutty flavor.

The best way to cook spaghetti squash is to roast it in the oven, cut-side-up, with a little olive oil and salt. So simple, and so good, you'll want to eat it right out of the shell.

Brushed with olive oil, seasoned with salt and pepper, and cooked cut-side-up in a hot oven for a short amount of time, this spaghetti squash gets the full benefit of high-heat roasting. The olive oil encourages browning, which is what makes roasted veggies so delicious, and the squash gets perfectly cooked - tender with a little crunch.

Cooking spaghetti squash is pretty easy, but if you get it wrong you can end up with flavorless mushy mess. If you're going to cook spaghetti squash, you need a cooking method that maximizes its flavor and texture.

So what is the best way to cook spaghetti squash?

Some chefs and bloggers focus on baking the squash whole to avoid having to cut it when it's raw, some advocate for super quick microwaved spaghetti squash, still others claim that for the best flavor you should cut the squash into rings and then bake it.

By far the most popular recommendation is to slice the squash in half and cook it in the oven, cut side down - some of these recipes say to add water to the pan, others say to leave it out.

I cook spaghetti squash once a week - have for years - and I've tried LOTS of different cooking methods - mostly with the squash cut in half and roasted in the oven. I can tell you from experience, the problem with roasting spaghetti squash face down with water in the pan is that the squash steams, gets soggy, and doesn't develop a tasty roasted squash flavor.

Cooking the squash face down without water in the pan is a little bit better, but not much. Squash is made up of mostly water so even without added water, if spaghetti squash is cooked cut-side-down, it will still steam in its own released juices.

My tried and true favorite way to cook spaghetti squash

Of all the methods I've tried and tasted, the best way to cook spaghetti squash is to roast it in the oven, cut-side up, with no added water, just some olive and salt.

More details and photos below, but before we talk too much about cooking this squash, we have to talk about cutting it.

Spaghetti squash is a hard-shell squash with a very hard shell. I can't tell you how many times I've gotten my knife stuck into the squash like cement, with the only recourse being to grab the knife handle and slam the squash down on the counter, hoping for the best. Thankfully I found a better strategy.

How To Cut A Spaghetti Squash - The Reliable Way

Here's how to do it:

Now you're ready to get cooking.

How To Cook Spaghetti Squash - step-by-step

Cut the squash in half lengthwise (instructions above) and scoop out the seeds.

Lay the squash halves on a rimmed baking sheet - cut-side up. Don't add any water to the pan. We want to roast the squash, not steam it.

Brush the insides and tops generously with olive oil and season them with salt. Fresh ground black pepper is delicious too, if it works with the recipe you're preparing.

Roast the squash in a preheated 425ºF/220C oven for 30-40 minutes, checking for doneness after 30 minutes. The squash is done if the strands easily pull away from the shell when tested with a fork.

When the roasted squash is cool enough to touch, use a fork to scrape the strands away from the shell, working from the outside in.

I especially love roasted spaghetti squash with my favorite turkey ragu, cooked al denté, the same way I like my pasta.

Here are the directions for how to make delicious roasted spaghetti squash. If you try this method, I hope you'll come back to leave a star rating and a comment. I'd love to know what you think.

Here's how to cook spaghetti squash so the noodles are al-dente and have a delicious buttery roasted flavor. Use this roasting method to prepare spaghetti squash for any recipe, whether you're topping it with your favorite pasta sauce or using it in a casserole.

How to cut a spaghetti squash in half: Use a small sharp knife to make a series of side-by-side horizontal slits along the top of the squash, from stem to tail. Now use a large sharp knife to make deeper cuts, along the channel you created. Start from the center of the squash and work towards one end. Then turn the work towards the other end. Repeat until you've cut through most of the squash. At the end, you may need to pull the two halves apart, if you can't cut through the tough stem. NOTE: step-by-step photos in the post may be helpful)

Nutrition Disclaimer: The information shown is an estimate provided by an online nutrition calculator and is not a substitute for the advice of a professional nutritionist. The calculation below is for a 3-pound spaghetti squash with the amount of oil and salt listed in the ingredients.