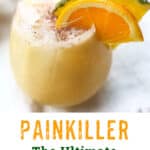 Nothing says palm trees and ocean breezes like an ice cold Painkiller, the ultimate Caribbean cocktail. Pineapple juice, orange juice, coconut cream and rum are shaken, poured over ice, and topped with fresh grated nutmeg, to make this terrific drink that literally tastes like the tropics. 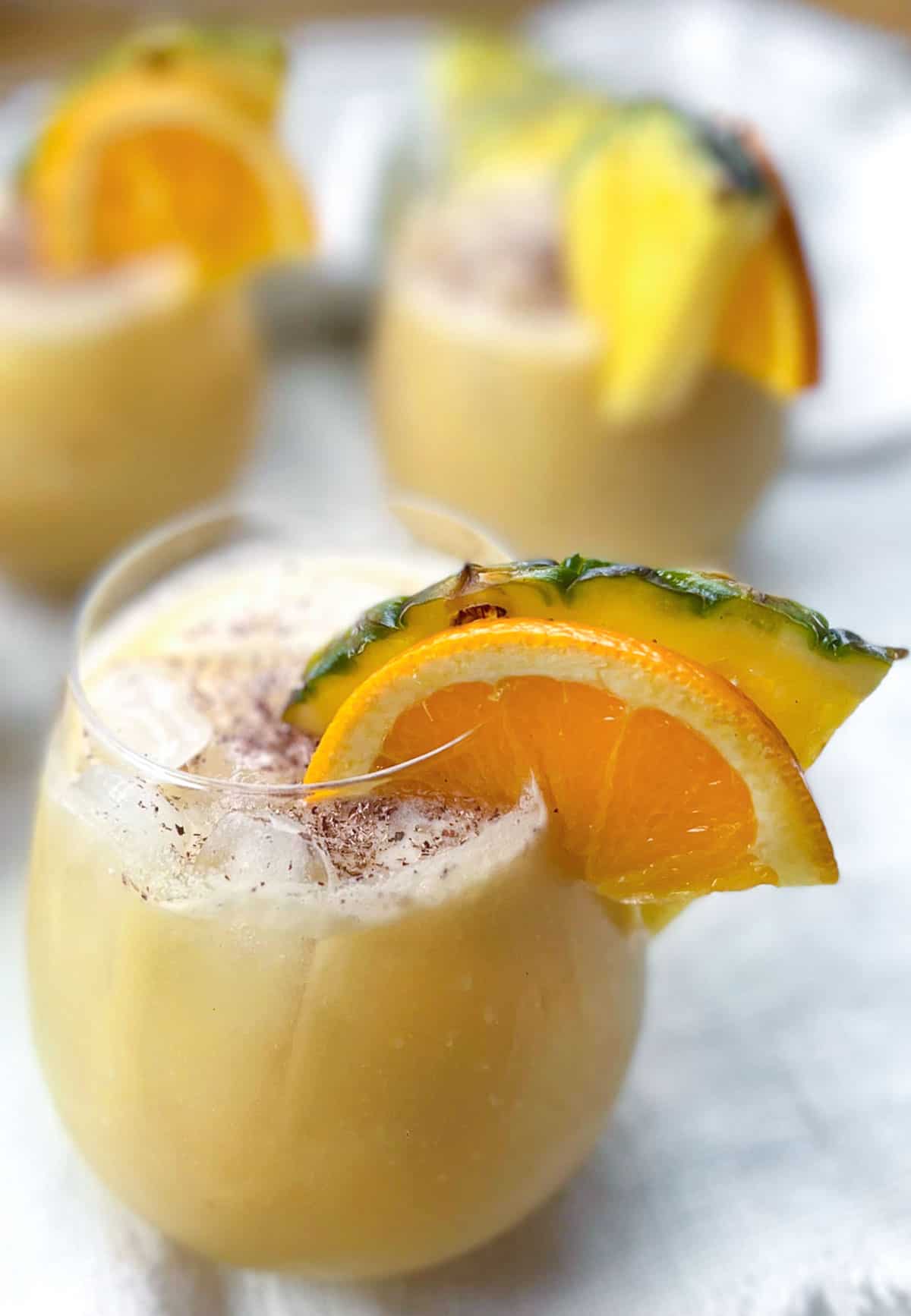 You will love sipping a painkiller over brunch, at a summer barbecue or anytime you feel festive or want to feel festive. A painkiller cocktail transports you to a beach overlooking the turquoise waters of the Caribbean. After a few sips you'll be feeling those happy tranquil island vibes.

Why is it called a Painkiller?

Because it makes you feel good.

And it really does. When we travelled to the Island of St. John a few years back, the first thing we did when we got off the boat was head to nearest bar for a round of painkillers. We had heard raves about this legendary island cocktail and it didn't disappoint. A few sips in and we and we were all smiles, feeling vacation relaxation come over us.

Here's what you need to make Painkillers

You need orange juice, pineapple juice, cream of coconut and Pusser's dark rum. These four main ingredients plus ice, freshly ground nutmeg, and thin slices of pineapple and/or orange to garnish the glasses. 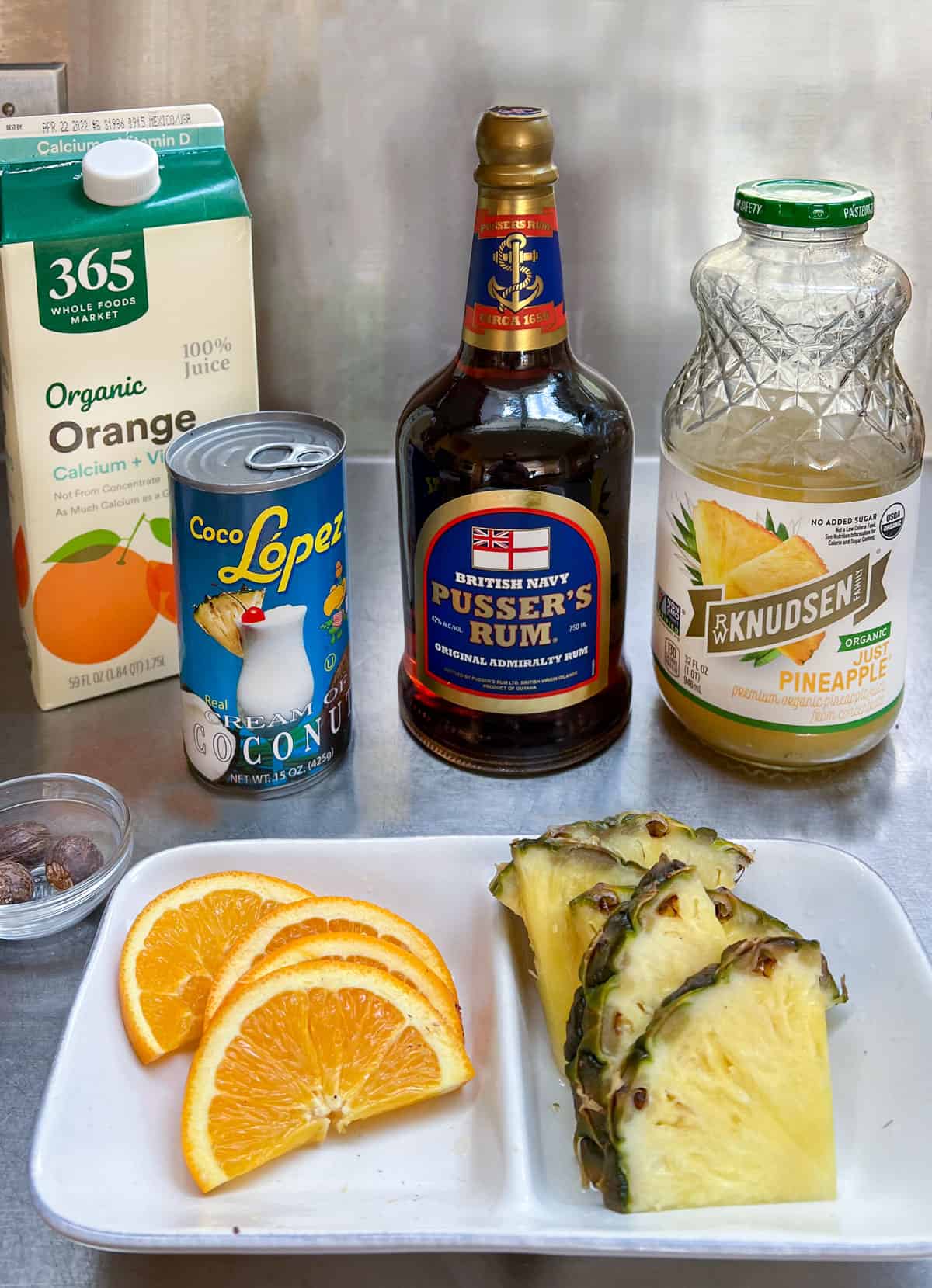 Is there an authentic painkiller cocktail recipe?

The most authentic painkiller recipe is the one served at the Soggy Dollar Bar, on the Island of Jost Van Dyke where this drink was invented. However, they keep their proportions secret. Their version of the painkiller is legendary, but you've got to go there to enjoy it. (I'm in!).

If you search the web for painkiller recipes you will discover that all the recipes out there use the same ingredients. It's only the proportions that differ slightly. Most painkiller recipes, including liquor.com's recipe, follow the proportions recommended by Pusser's rum. We tested out that version and found it to be pure perfection. See our printable recipe card below for all the details.

COMMON QUESTIONS ABOUT THIS COCKTAIL

CAN I MAKE THIS WITH ANOTHER RUM BESIDES PUSSER'S?
Technically yes. Legally no. Pusser's Rum has a U.S. trademark which stipulates that for a drink to be called a "painkiller" it has to be made with Pusser's Rum. (more on this below)

HOW DO I MAKE A PITCHER OF PAINKILLERS?
The recipe card below gives you the proportions for making two drinks but it's easy to amp it up and make painkillers for a crowd using the same proportions: 4 parts pineapple juice, 2 parts rum, 1 part orange juice and 1 part coconut cream. Mix all the ingredients in a pitcher and pour into large, ice-filled glasses. For best results, chill the rum and the two juices the fridge for a few hours, before mixing. However don't chill the coconut cream because it will get solid and difficult to mix. 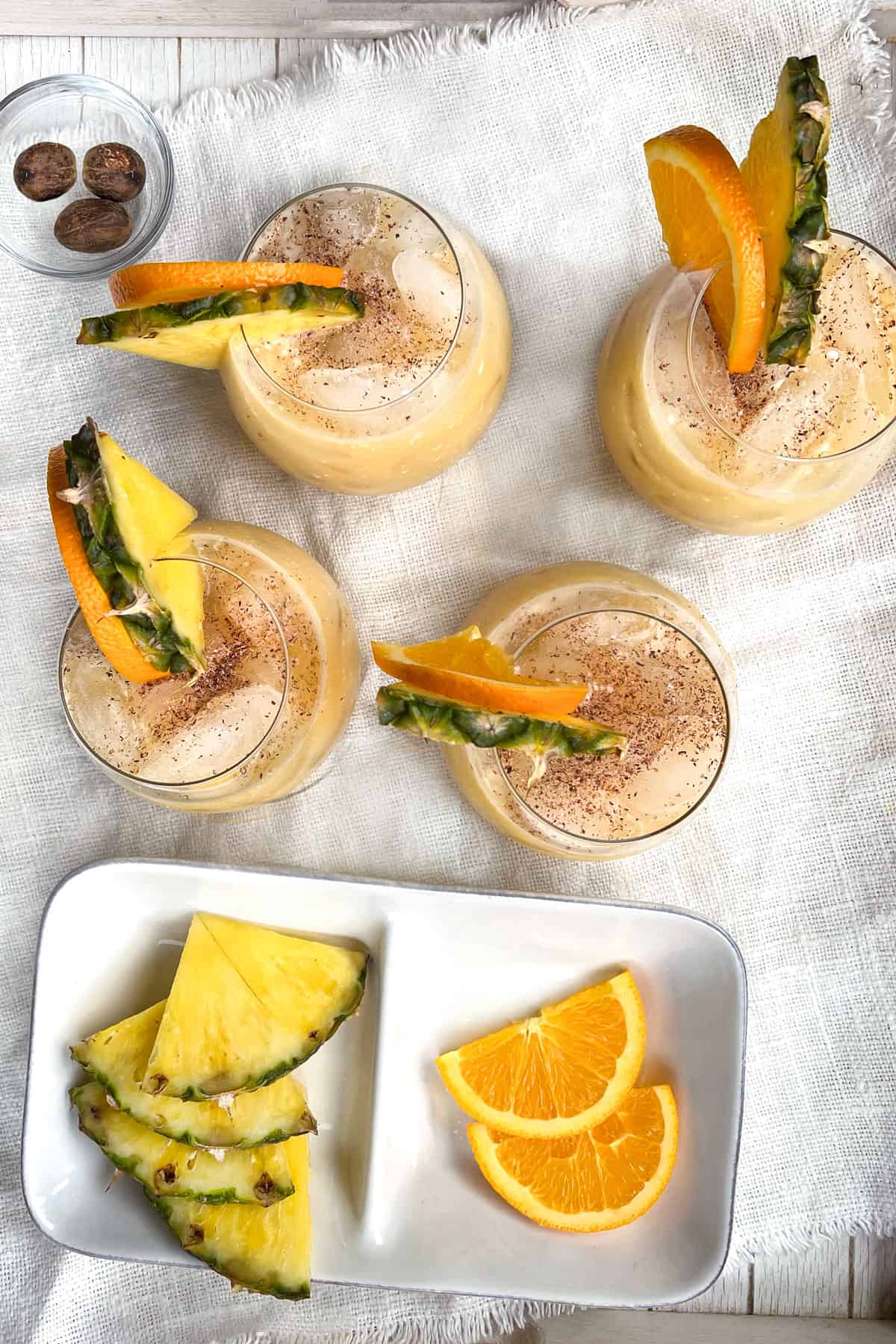 The story of the painkiller cocktail began in 1971 on the British Virgin Island of Jost Van Dyke at an open-air, beachfront bar called The Soggy Dollar, which got its name because the only way to get there was to jump off your boat and swim over, so the dollars in your pocket that you used to pay for drinks, were wet and soggy.

The owners of the Soggy Dollar invented a rum drink called a Painkiller, made with fruit juices, coconut cream and local Cruzan Dark Rum. News spread about how good it was and boaters came from far and wide to try it. One of those boaters was an American named Charles Tobias.

Cut to 1979. Charles Tobias bought the rights to produce and sell a dark rum that had previously been owned by the British Admiralty, and was served to the Royal Navy Sailors. Tobias named this rum Pusser's, after the "pursers" on the ships who served the rum to the sailors.

As the story goes, Tobias had this new rum business and now he wanted the painkiller recipe. But when tried to convince the owners of the Soggy Dollar to give it to him and they refused, he figured out his own version which he deemed to be very close to theirs, only better.

Now comes the zany part. In 1989 Tobias filed a U.S. trademark which stipulated that for a drink to be called a "painkiller" it has to be made with Pusser's Rum. This actually led to some legal legal battles and questions as to whether it's even fair to trademark a recipe.

These days things seemed to have settled down and it's pretty much accepted that a painkiller has to be made with Pusser's Rum. Pusser's is a delicious dark rum and works beautifully in this drink and until I uncovered the info about the trademark, I just assumed that Pusser's Rum is uniquely the most perfect rum for this cocktail. But now I know, and you know, that there is more to it than just that! 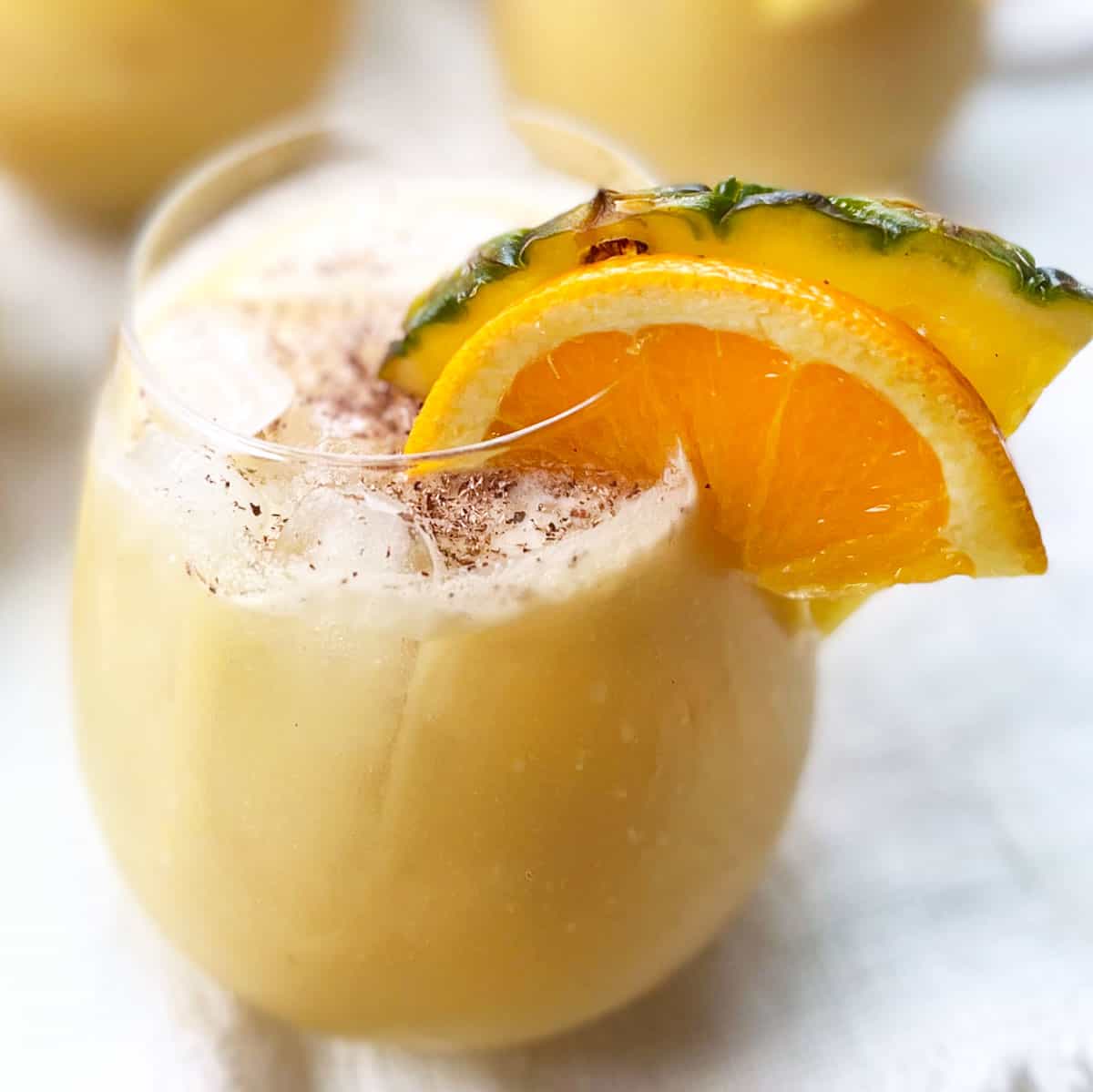 Here's the Painkiller Cocktail recipe. If you make this, I hope you'll come back to leave a star rating and a comment. I'd love to know what you think.

This creamy, fruity, refreshing rum drink is the signature cocktail of the Virgin Islands. It's similar to a piña colada, only less sweet and more sophisticated, with rich, smooth, subtle flavors. A wonderful drink for a festive brunch or for cocktails on a summer night.

Nutmeg Grater: I use this grater for nutmeg. It also works for grating parmesan cheese and zesting lemons. Here's a good choice if you want a dedicated nutmeg grater.

How to make a pitcher of Painkillers: Use the proportions 4 parts pineapple juice, 2 parts rum, 1 part orange juice and 1 part coconut cream. Mix all the ingredients in a pitcher and pour into large, ice-filled glasses. For best results, chill the rum and the two juices the fridge for a few hours, before mixing. However don't chill the coconut cream because it will get solid and difficult to mix.