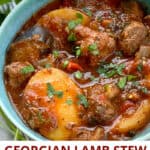 This enchanting lamb stew called chanakhi from the country of Georgia is assembled in layers, with lamb at the bottom, vegetables and herbs piled on top, filling the pot to its brim. A magical transformation occurs in the oven, bringing all the flavors together with meltingly tender lamb and rich flavorful sauce. A delicious comforting dinner for a cold winter night. 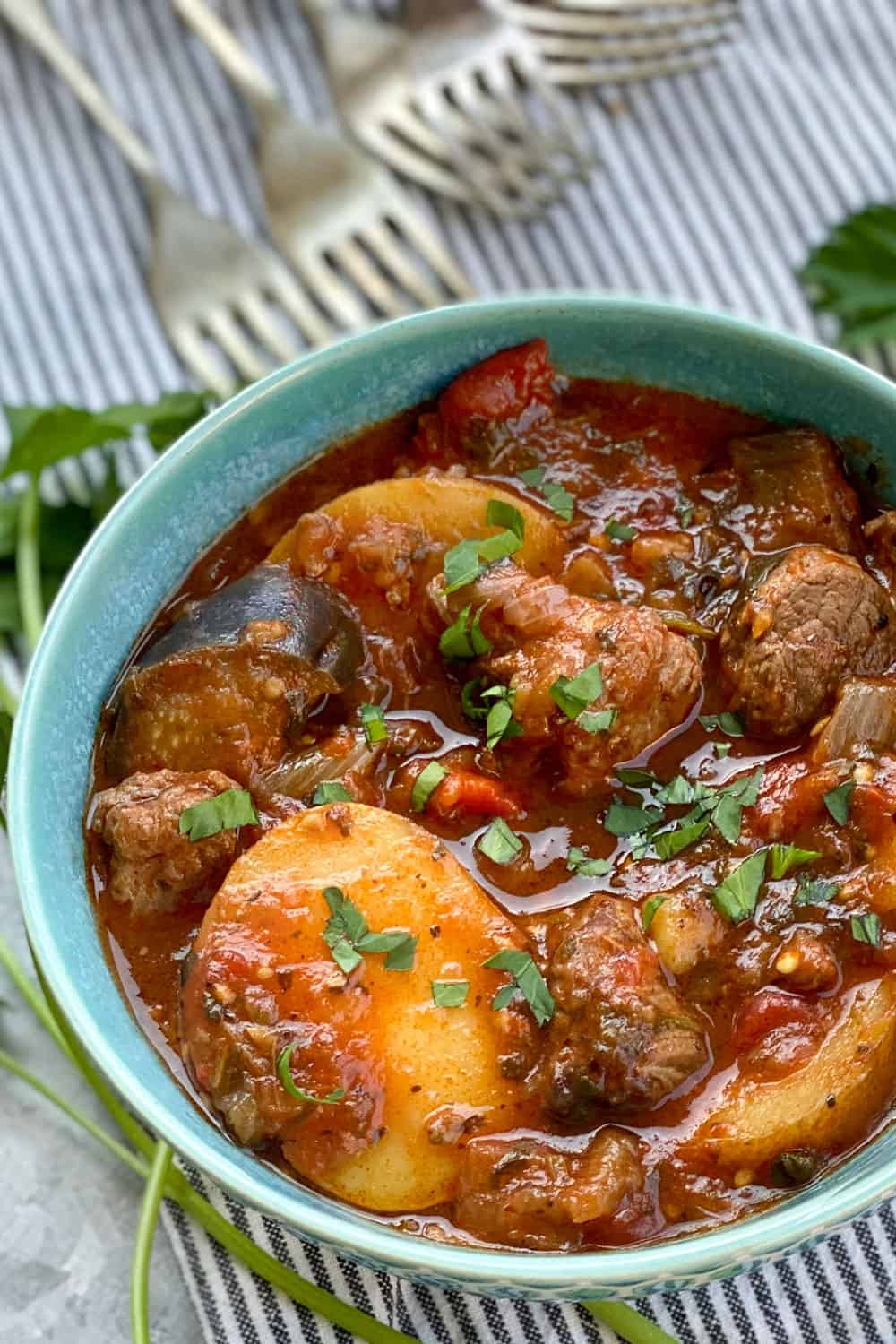 Georgian cuisine is so my kind of food! khachapuri (cheese-stuffed bread), stuffed vegetable dishes, inventive lamb stews, the abundant use of vinegar, garlic, spices and fresh herbs. The only time I had the pleasure of eating authentic Georgian food was many years ago when I took the train from Manhattan to Brighton Beach Brooklyn with two friends to have lunch at Tone Cafe, one of the legendary Georgian restaurants in that neighborhood.

I’ll never forget that lunch, especially the Adjarian khachapuri: freshly baked bread, shaped like a boat, filled with two cheeses and brought to the table piping hot. The server added a hunk of butter and two eggs to the melted cheese and whisked them in, while we sat drooling in anticipation. To eat this incredible creation, we pulled off hunks of warm bread from the edges of the “boat” and dipped them into the melted cheesy, buttery center!!! I’ve asked my blog bread baker (My husband Eddie) to get going on a khachapuri recipe for the blog. Stay tuned for that but in the meantime, Chanakhi!

What is Chanakhi and how is it cooked?

Authentic Georgian Chanakhi is a lamb stew with vegetables and herbs that's traditionally cooked in small clay pots called chanakhi, which is how the dish got its name. Each pot contains one portion. The stew is assembled in layers with cubes of meat, usually raw, at the bottom of the pot. The middle layer is eggplant that's been stuffed with lamb fat, garlic and herbs. The top layer is tomatoes and potatoes. The pots are covered and transferred to the oven to bake. 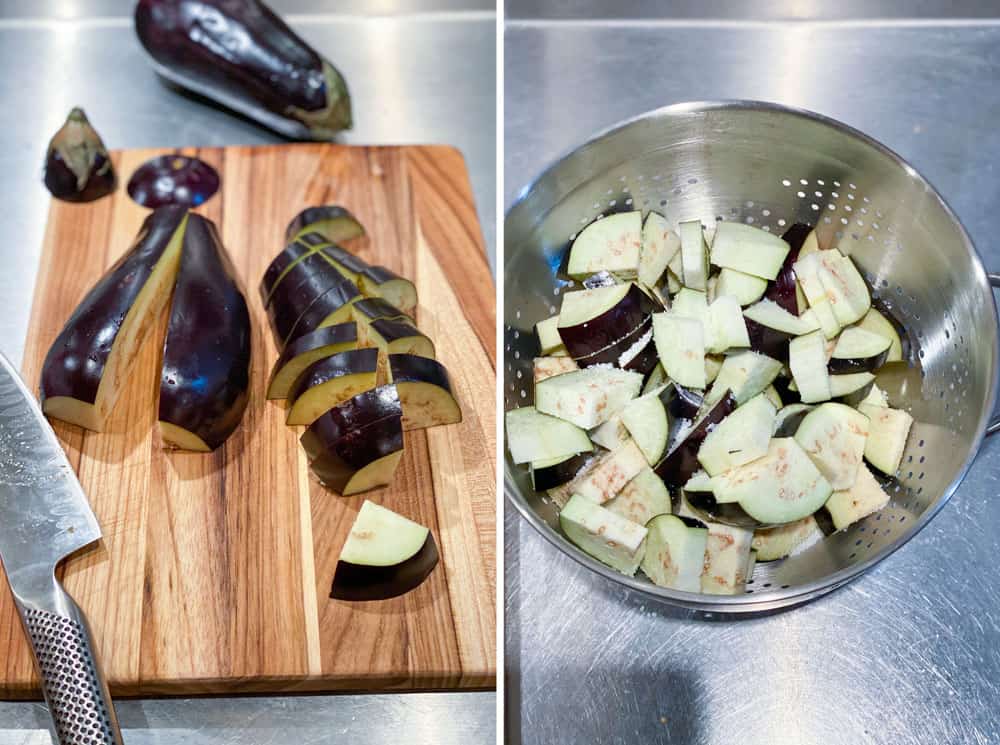 Ingredients and Adaptations for this Georgian Lamb Stew

According to food historian Copeland Marks, in whose cookbook I first discovered this Georgian dish, a chanakhi can have many variations but it always has lamb and eggplant along with other vegetables. It always has abundant fresh herbs, and it is traditionally prepared and served in a covered clay pot.

I have largely stuck to the traditional Chanakhi ingredients and technique for this recipe, with a few tweaks.

Two pots are needed for this recipe, a skillet for browning the lamb and sautéing the aromatic vegetables, and a a heavy stew pot or Dutch oven for assembling the lamb stew and braising it in the oven. 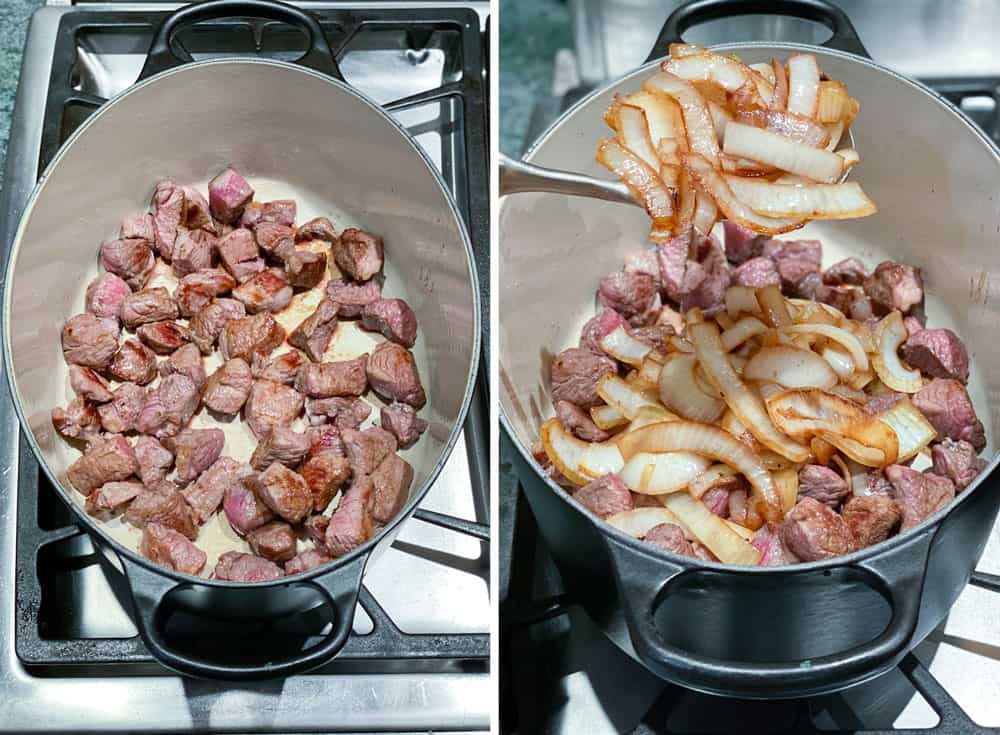 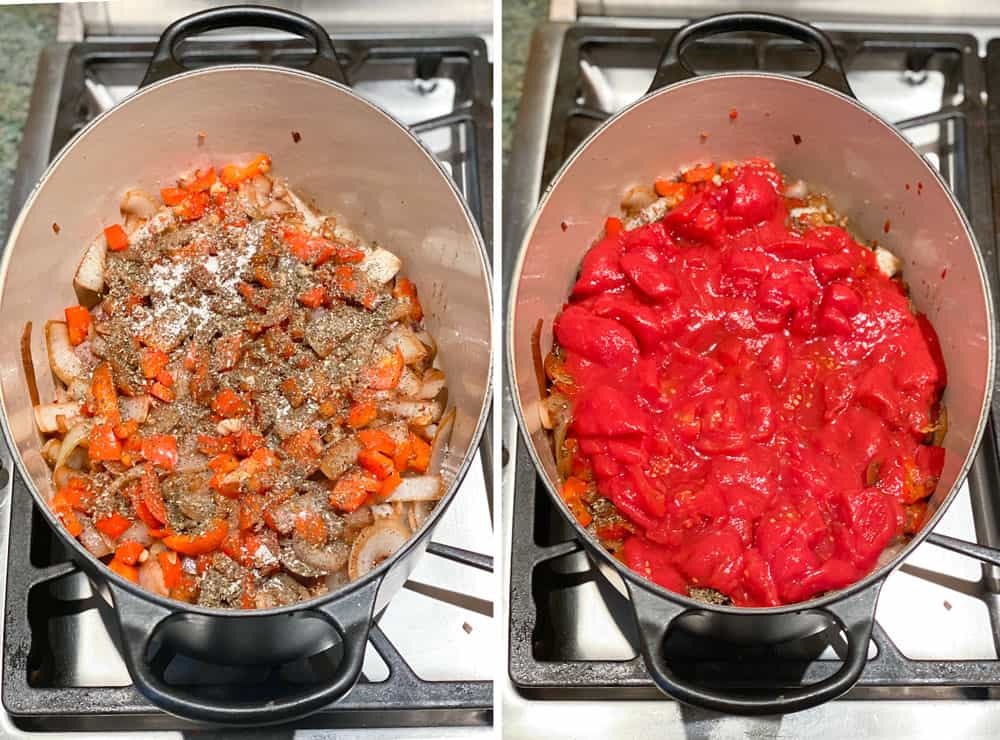 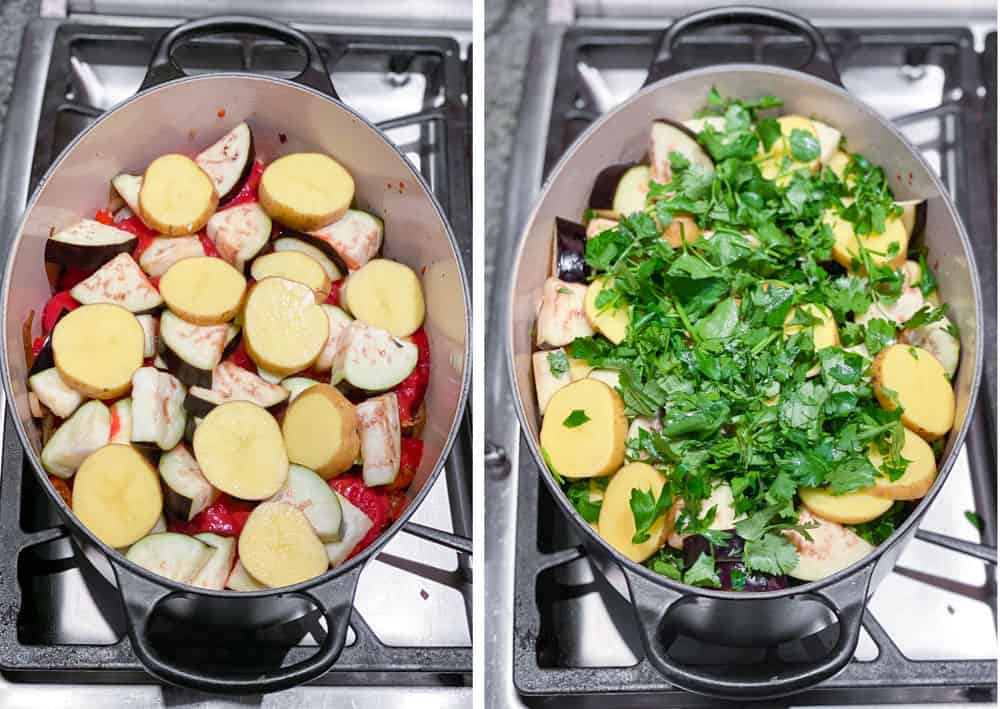 The before and after photos say it all. Lots of magic happens in the oven. 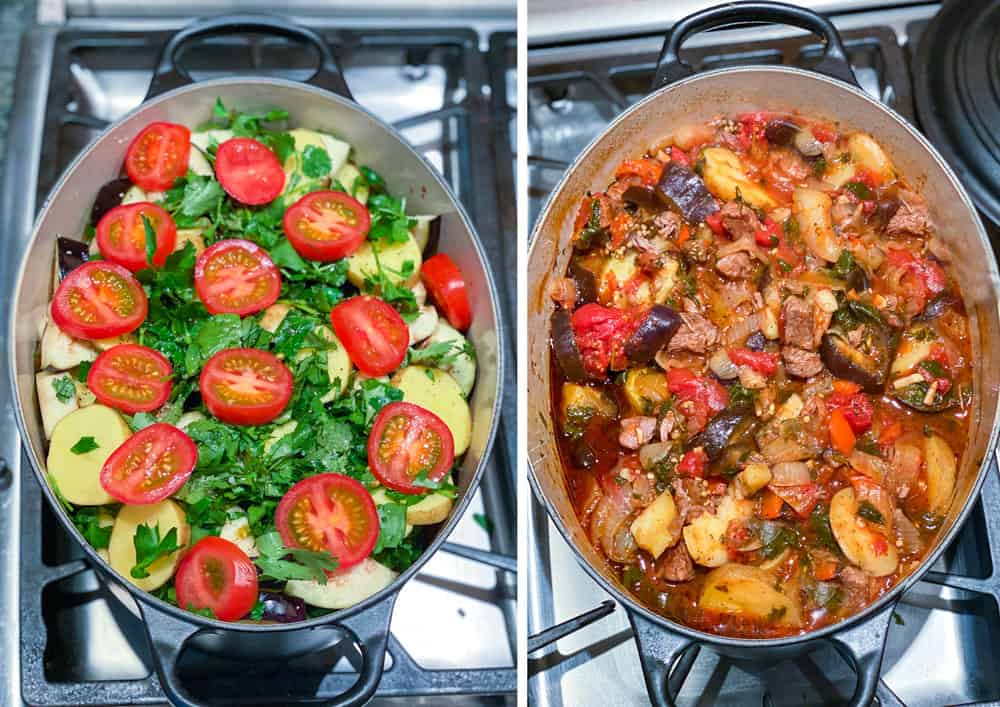 To Serve: Ladle Chanakhi into bowls and serve hot, with a sprinkling of fresh herbs on top and crusty bread on the side. Nothing more is needed for a complete and satisfying meal. However, if you enjoy a salad with your stew, this butter lettuce salad with citrusy dressing always makes a lovely side dish for a warm comforting stew.

Make this ahead: This lamb stew can be prepared a day ahead, kept covered in the fridge, and reheated at a low simmer or in a 300ºF oven. Like many stews, it's even better the next day, after the flavors have had time to meld.

Other hearty stew recipes to try: 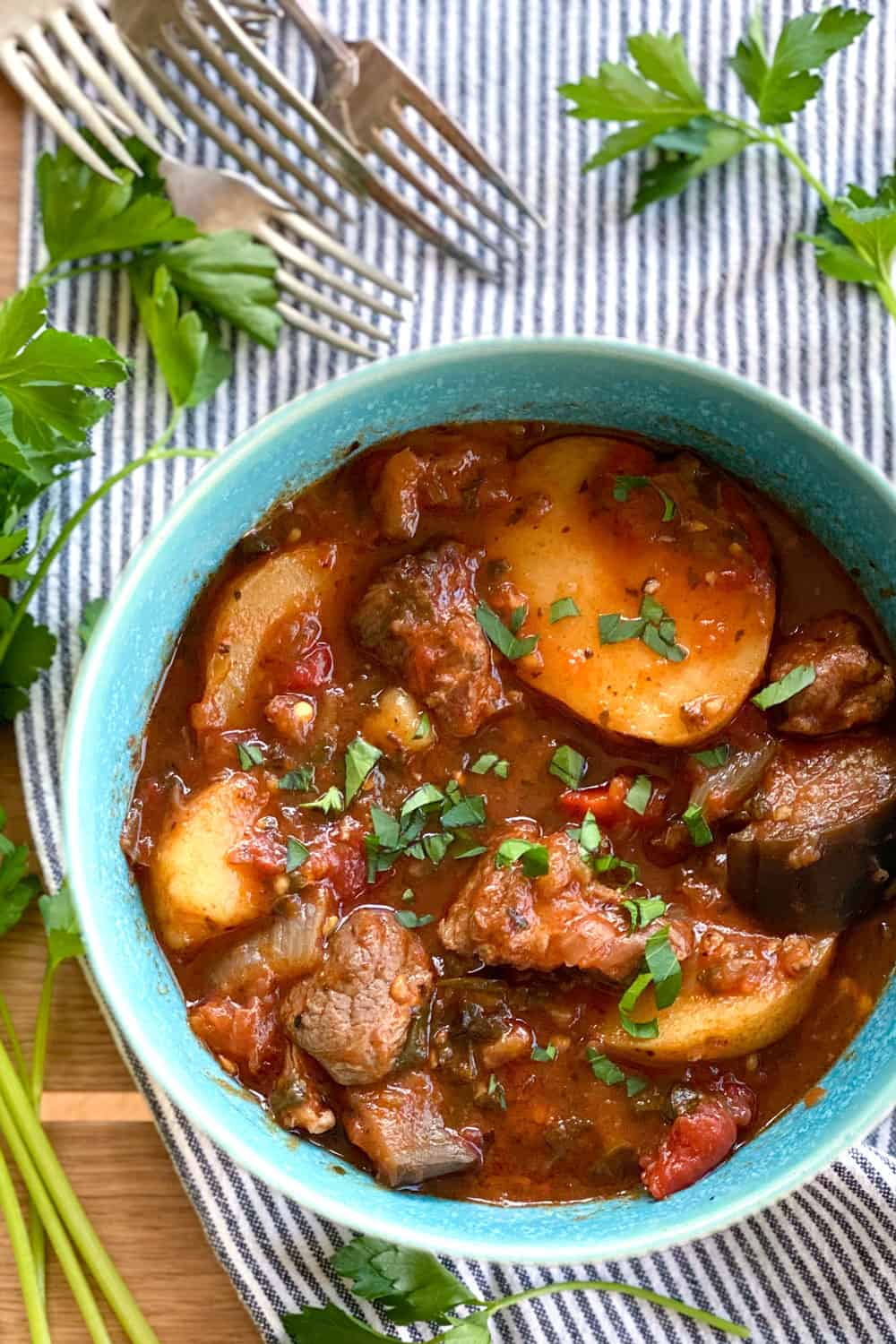 Here's the Georgian lamb stew recipe. If you try this I hope you'll come back to leave a star rating and a comment. I'd love to know what you think. 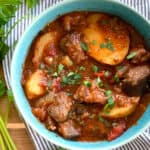 This stew is assembled in layers with meat on the bottom of the pot, onions, eggplant, peppers, potatoes, fresh herbs and tomatoes piled on top. A low slow oven braise brings it all together and yields a delicious and satisfying stew with meltingly tender lamb and vegetables, and rich flavorful sauce.

Equipment: You will need a large skillet and a large heavy-bottomed stew pot or Dutch oven with a lid.

Arrange an oven rack in the lower third of the oven, making sure there is enough head room for your stew pot. Preheat the oven to 350ºF.

Want to Prepare this ahead?: This stew can be prepared a day or two ahead. Allow it to cool and store it, covered, in the fridge. Reheated it, covered, at a low simmer or in a 300ºF oven, until hot. Like many stews, it's even better the next day, after the flavors have had time to meld.