Caponata is a Sicilian Sweet and Sour Eggplant Relish that makes a great appetizer atop bruschetta. It's also great with simple grilled or broiled fish or chicken, or as a sauce for pasta. {vegan, gluten-free} 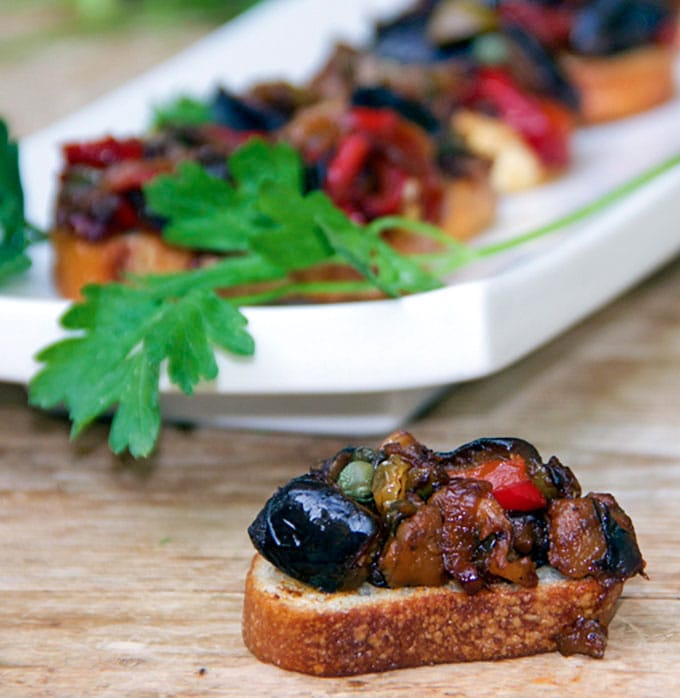 Yesterday my day started out badly. I turned on my computer and got a white screen with a lightening bolt. I was panicked. I did a quick Google search and it didn't look good - some implication that either I had been hacked or my operating system was corrupted. By the time I walked into the Apple Store for my genius bar appointment at 11am, there was a big dark cloud hanging over me - I was sure I had lost all my data and would need to buy a new computer...

As I was describing my whole sob story to the genius, he reached down and pulled a bell pepper seed out of my keyboard. It had wedged the "T" key in, which made the computer think it was the back-up drive for another computer....that was it! Problem fixed. Food blogging can be a risky business! 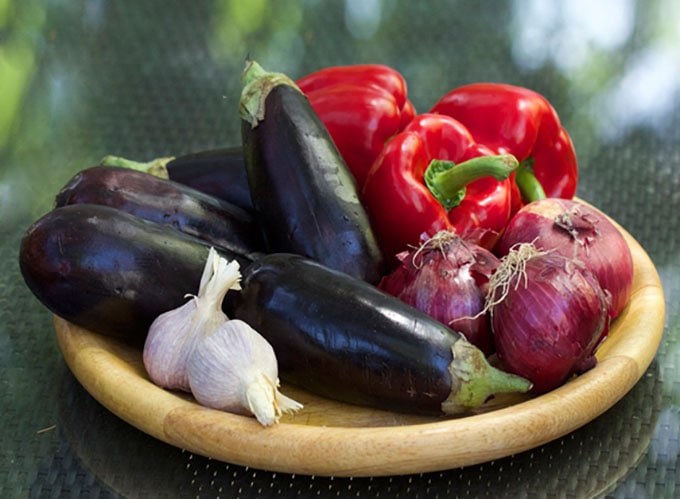 Caponata is a Sicilian sweet and sour eggplant relish that's often served on bruschetta or as part of an antipasto.  I've always wanted to learn to make caponata at home. This past week I did a lot of experimenting and I'm really happy with the results! 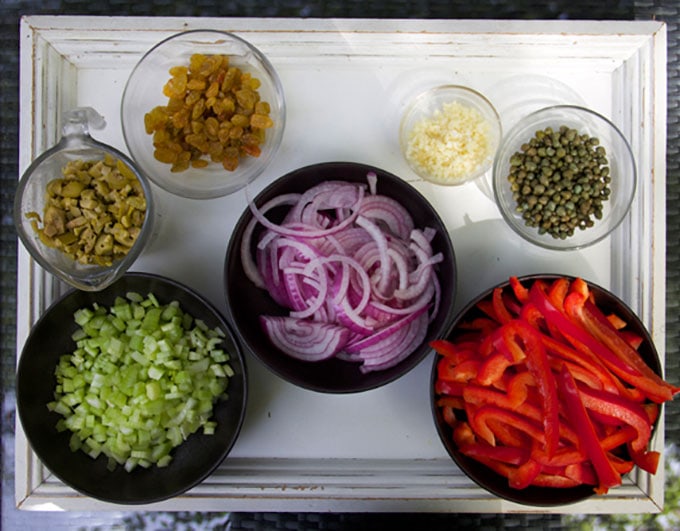 There are no shortcuts in this recipe if you want to end up with a fantastic caponata. First the cubed eggplant must be salted and rinsed so its bitter juices are released and so it browns up nicely when you sauté it. Then, there's the the chopping and slicing of the other vegetables, which you can do while you wait for the salted eggplant to be ready for cooking.

There's also a fair bit of standing over the stove, stirring. As I stood over the skillet, I kept saying "wow" to myself as I watched the vegetables caramelize and I inhaled the intoxicating aromas that were floating up and around me. 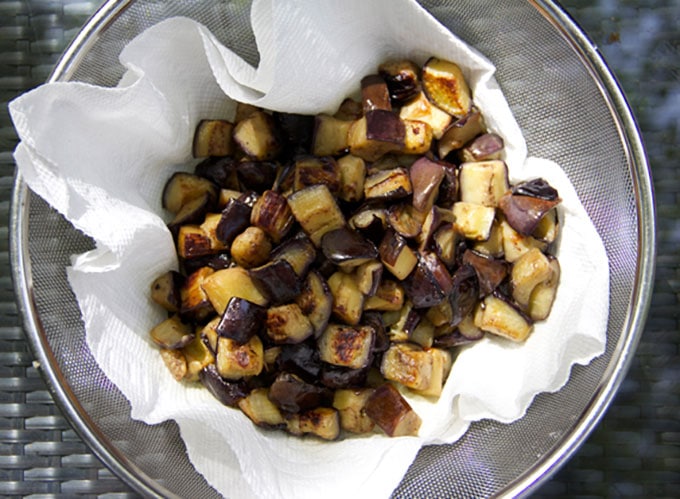 In learning how to make caponata I also learned that Sicily is home to Mount Etna, one of the world's largest and most active volcanoes. The almost constant volcanic activity from Mount Etna is one of the reasons the island has such rich, fertile soil and such a thriving agricultural economy. 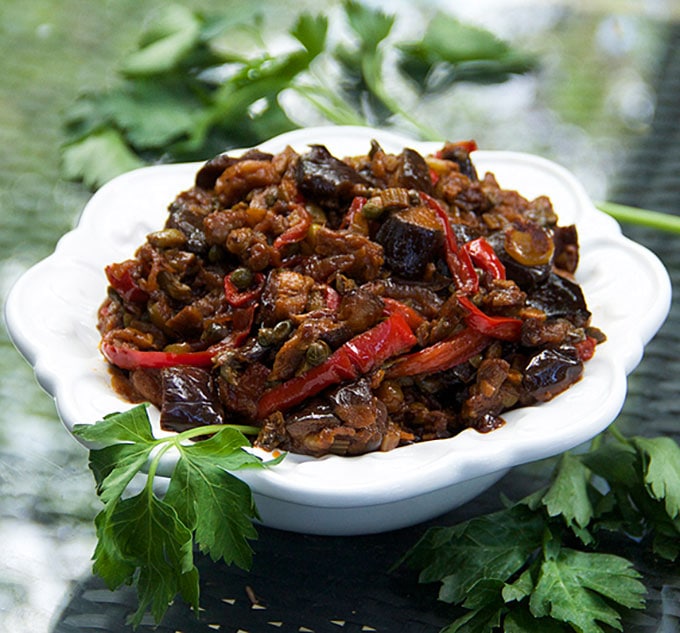 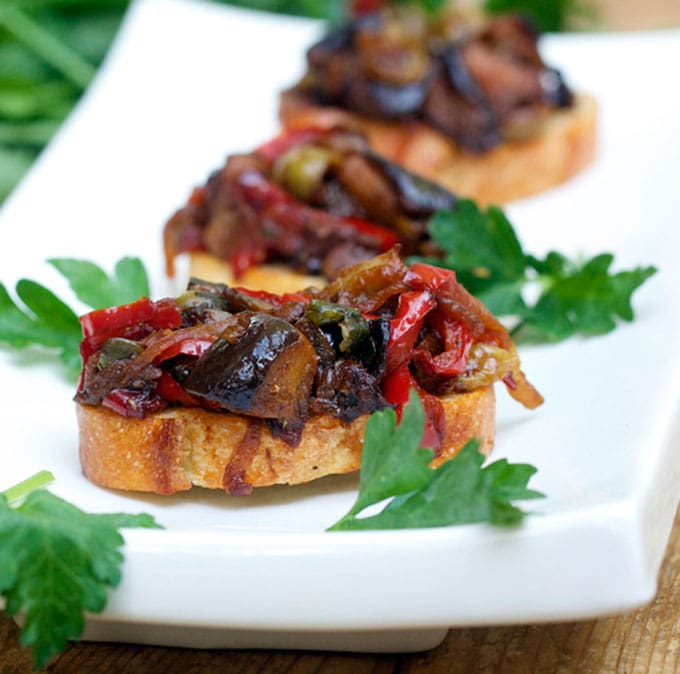 Sicily is an island in the central Mediterranean just off the toe of Italy's boot. Due to it's strategic location, it's been a melting pot of the different ethnic groups that have landed on its shores: Greeks, Romans, Arabs, French, Germans, Spanish, Italians and British. And of course all these diverse cultures bring their culinary influences along with them.  In Sicilian caponata we can credit the Arabs for the raisins and sugar, the Spanish for the tomatoes and peppers, and the Greeks for the olives. 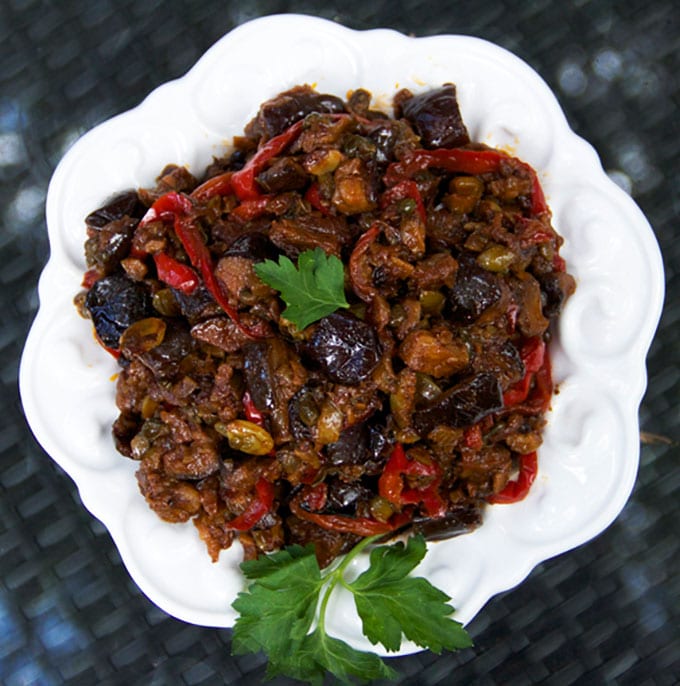 As I look down into my bowl of caponata, I see a metaphor for Sicily's cultural history, with all of its rich and complex flavors and bold colors and textures.

Last night, after a long day that didn't start out great I brought a bowl of caponata with crostini to my friend Carolyn's house and hung out on her porch with a bunch of friends. The day ended really well. I love the feeling of working hard in the kitchen and creating something of beauty. I love fixable problems. And I love my friends.

Here's the recipe for Caponata. If you try this recipe I hope you'll come back to leave a rating and a comment. I'd love to know what you think.

Sweet & sour eggplant relish - great as an appetizer atop bruschetta or on grilled fish or on pasta.