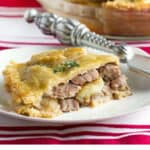 This savory Cheshire Pork Pie is filled with thin slices of pork tenderloin layered with tart apples, wine and spices; encased in a rich double pastry crust; and baked. Take a step back in time and enjoy this delicious pork pie recipe from the 18th century. 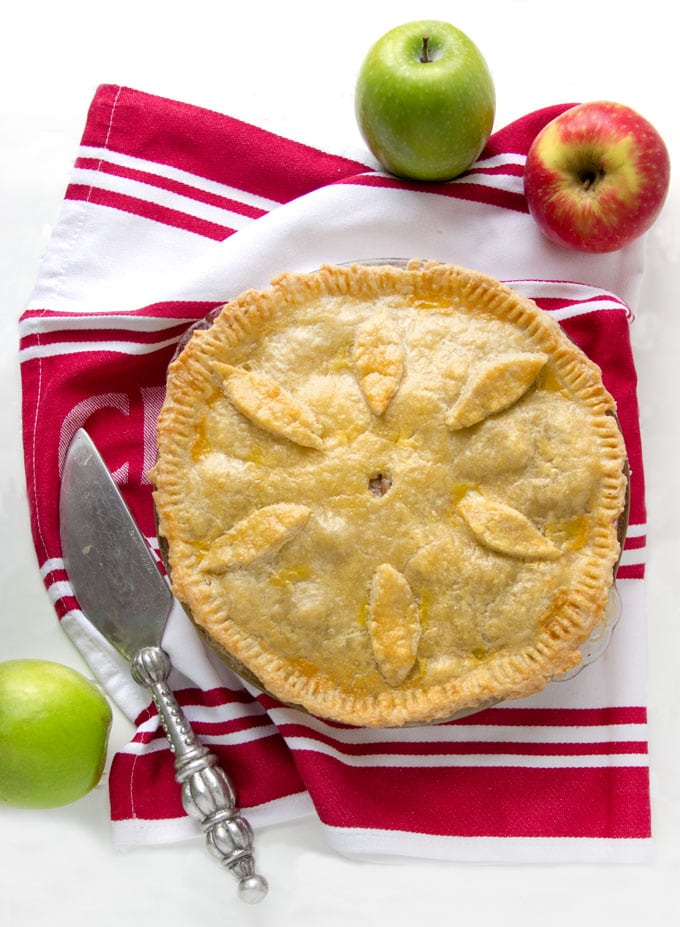 Today I'm traveling back in time to bring you a recipe for delicious Cheshire Pork Pie from 1745. The recipe has been updated since its inception, and you'll understand why when you see how the original recipe was written.

Joining me today, to tell you all about the joys and challenges of cooking historical recipes, is culinary historian Brook Elliott. Brook Elliott and his wife, Barbara, are living history interpreters who recreate the lifestyles of the late 18th and early 19th century, focusing on the Trans-Allegheny Exploration and Settlement period (1750-1792).

“You cannot understand any culture,” Brook says, “without paying especial attention to the foods and cooking techniques of the time.” With that in mind, the pair have spent more than a quarter century learning about the food ways of Colonial America, and reproducing those foods for the modern palette. 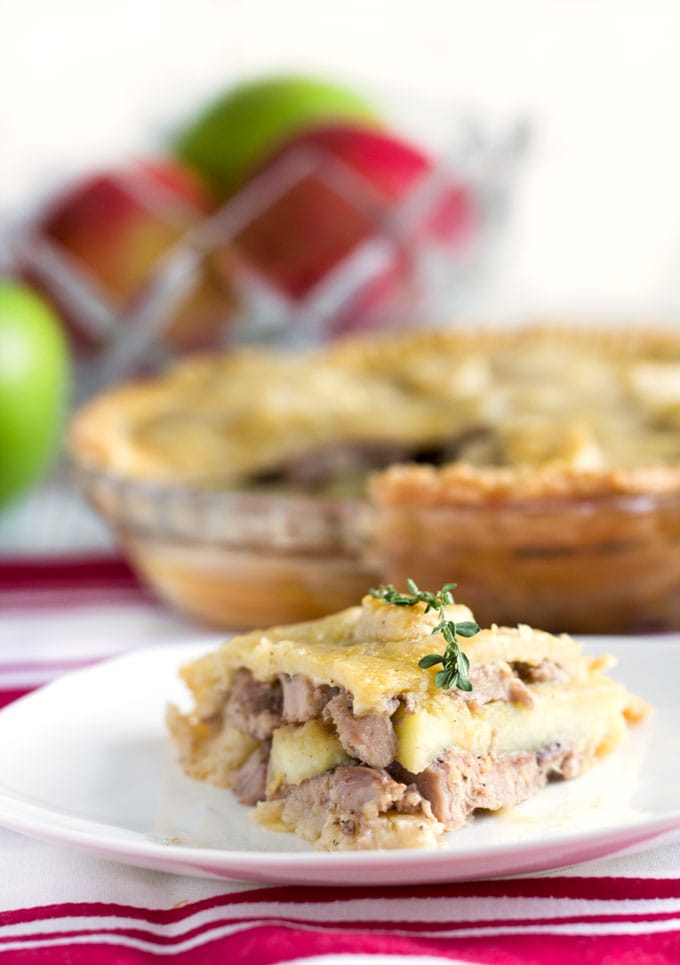 The Challenges of Adapting Historic Recipes

"Adapting historic recipes is always an adventure," says Brook.  "In addition to the obvious problems, such as language differences, unfamiliar ingredients, and lack of instructions, it is important that you first understand the world view of the people you are emulating. You cannot bring a 21st century mindset to a different time period and expect your interpretation to be correct.

A good example is the oft-heard contention that colonial (and earlier) cooks used herbs and spices to cover the taste and smell of rancid meat. Nothing could be further from the truth. So let’s debunk that myth right now.

People in the 18 century were fully aware of bad meat, and would no more willingly eat it than we would. For instance, Boston’s Haymarket Square, which, until they moved it in the 1980s, was the longest continually operated market in America. As far back as 1630 a market was operating on that spot. By 1633 the Colonial government had to post rules for its use. Among them: “No blown, rotted, or spoilt meat may be offered for sale.”

What is true, however, is that they liked big, bold flavors back then. They preferred their proteins on the high side, just as they still do in England and parts of Europe. And they used herbs and spices with a lavish hand; so much so that many of their favored dishes would be considered inedible by today’s standards. 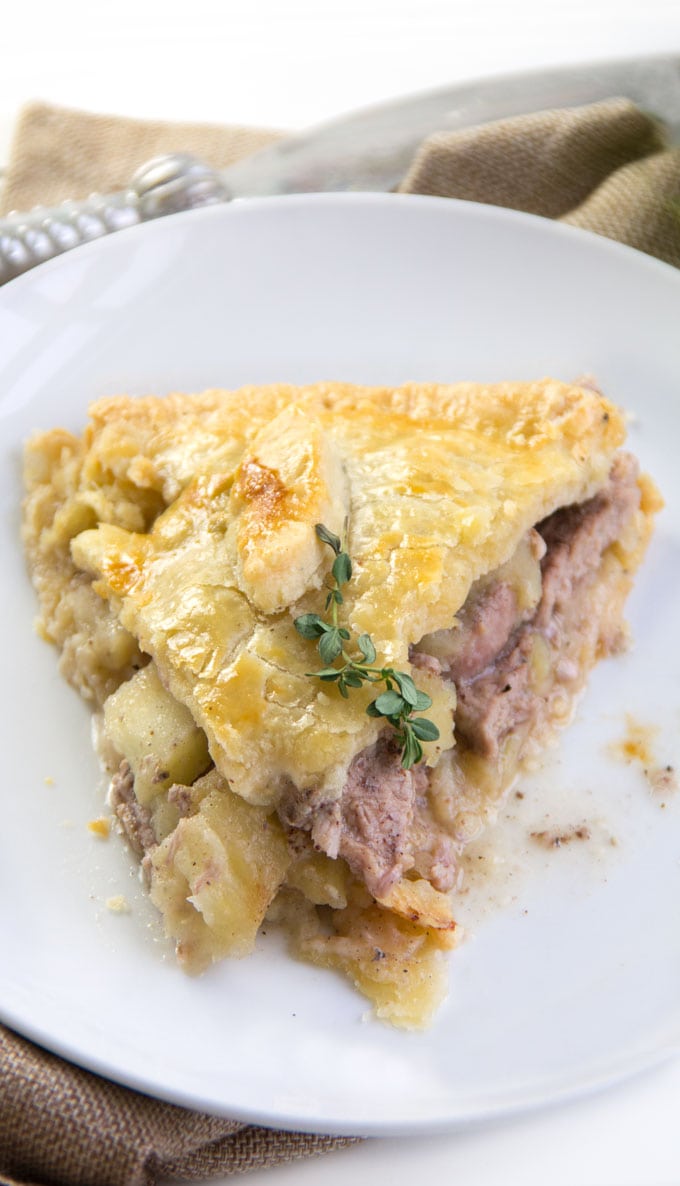 "Another challenge (when interpreting historic recipes) has to do with cooking terms and instructions.  Take the term 'roast,' for instance. There are five or six modern techniques, all of which were called roasting in those days. So which one did the recipe mean?

Ingredient amounts and cooking times were rarely listed in period recipes. And when they were, they often were vague at best. The number one ingredient amount, for example, is 'some;' as in 'strew with sage, beaten fine, and some cinnamon, and cook ‘til enough.'

Let’s analyze that phrase. 'Strew,' obvious enough, means sprinkle. 'Beaten fine' doesn’t mean pounding. It refers, rather, to chopping---in this case, mincing is more likely. And 'til enough' simply means it is cooked until it is done.

There’s a reason for this seeming vagueness. When a recipe was written down, the presumption was that you already knew how to cook. You had, after all, learned it at your mother’s knee. So there was no need for the cooking minutia that is the hallmark of modern recipes. And in fact, the above phrase is the complete set of directions for a particular chicken dish." 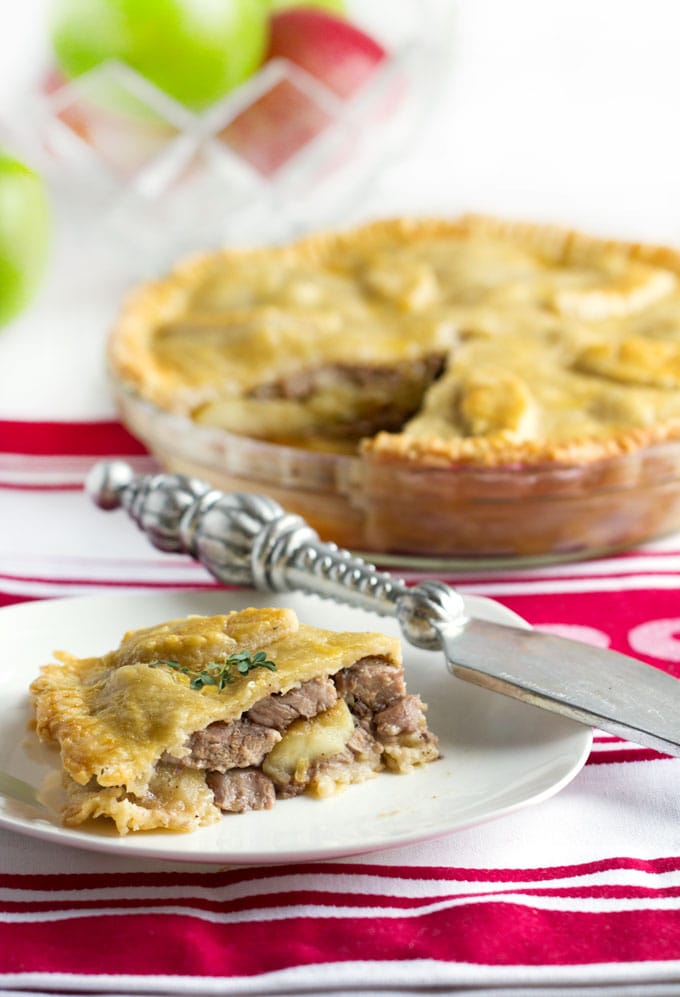 "A final note on interpreting period recipes: In the 18th century they cooked  humongous quantities. Our adaptation of Cheshire Pork Pie, with 1 ½-2 pounds of meat, serves four to six people. The original called for an entire pork loin, which, in those days, could weigh 15-20 pounds.  These huge amounts are not untypical. So recipes have to be adjusted accordingly."

Here is the original recipe for Cheshire Pork Pie from The Art of Cookery Made Plain and Easy by Hannah Glasse, 1745
TO MAKE A CHESHIRE PORK PIE:
Take a loin of pork, skin it, cut it into steaks, season it with salt, nutmeg, pepper; make a good crust, lay a layer of pork, then a large layer of pippins pared and cored, a little sugar, enough to sweeten the pie, then another layer of pork; put in half a pint of white wine, lay some butter on top, and close your pie: if your pie be large, it will take a pint of white wine.

You can clearly see the challenges in cooking this recipe: no amounts listed for the meat or spices; no recipe or instructions for the crust; no cooking temperature or timing is specified... Here's how Brook and Barbara updated the Cheshire Pork Pie recipe for their cookbook: "A Colonial Virginia Book of Cookery" 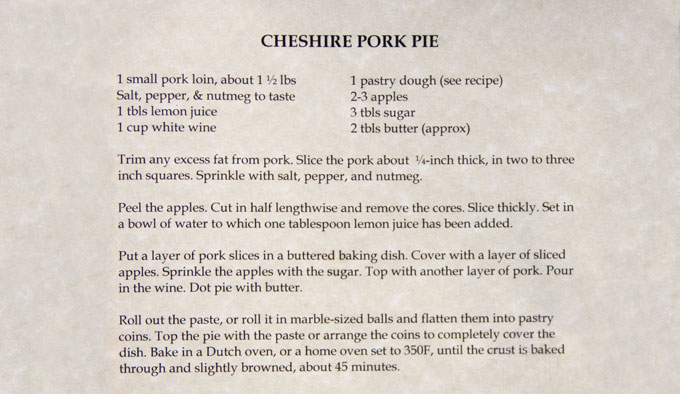 Brook discusses his thoughts about changing a historic recipe: "Is the goal to modernize it? Or to adapt it? Superficially that seems like the same thing. But modernization means using readily available ingredients as substitutes for the actual products specified, or substituting more popular modern ingredients. Nothing wrong with that approach. But we’re not into modernizing. Our goal is to use the original ingredients as much as possible, but adapt them in such a way as to maintain the flavor profile of the dish, while making it palatable to modern tastes. Not always an easy task. It often takes multiple attempts before we’re satisfied that we’ve come as close to achieving that goal as possible."

I cooked Brook and Barbara's recipe for my family, and we loved it. The pork was tender and the flavors of the apples, wine and nutmeg paired beautifully.

I cooked the pie a few more times and made a few adaptations of my own, without modernizing or compromising the flavor profile of the original dish. My changes were mainly in the presentation. I wanted a double-crusted pie so that it would hold together well when sliced. I also wanted a thicker sauce and a reduced amount of liquid in the finished pie so the crust wouldn't be soggy.

How to make this delicious updated Cheshire Pork Pie recipe

A simple pastry dough is prepared and used to line a pie pan. The pie is filled with sautéed apples, raw sliced pork tenderloin, spices, butter and wine. The pie is covered with a top crust and baked. 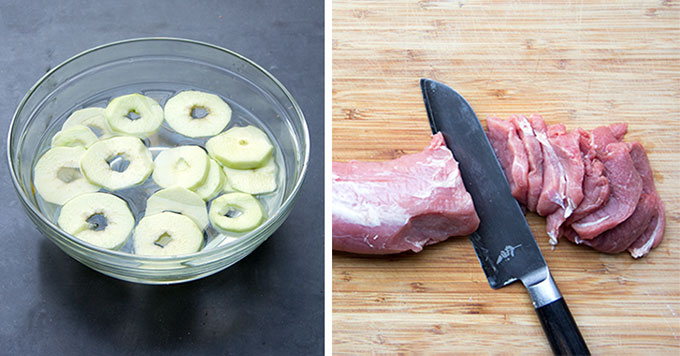 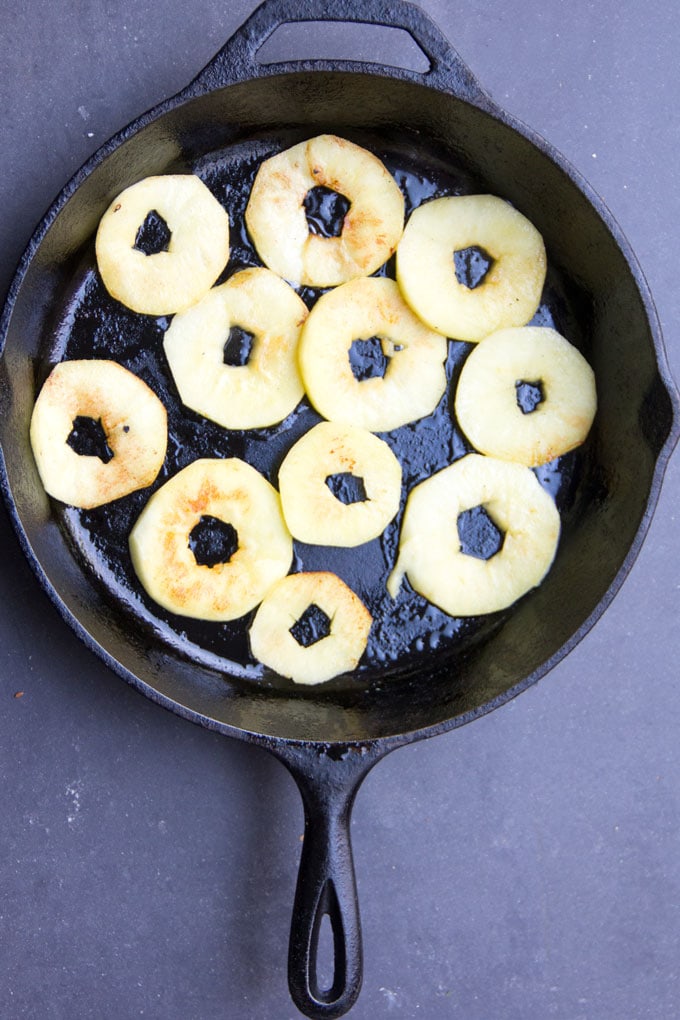 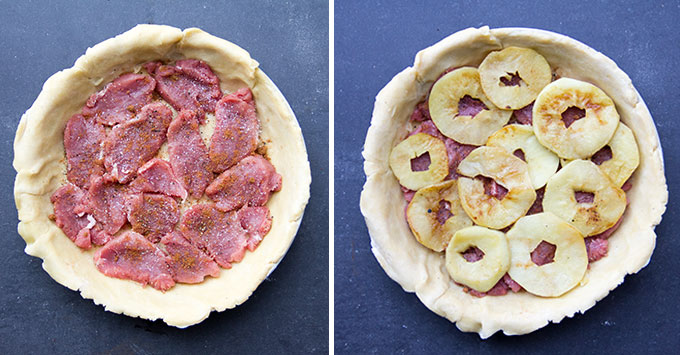 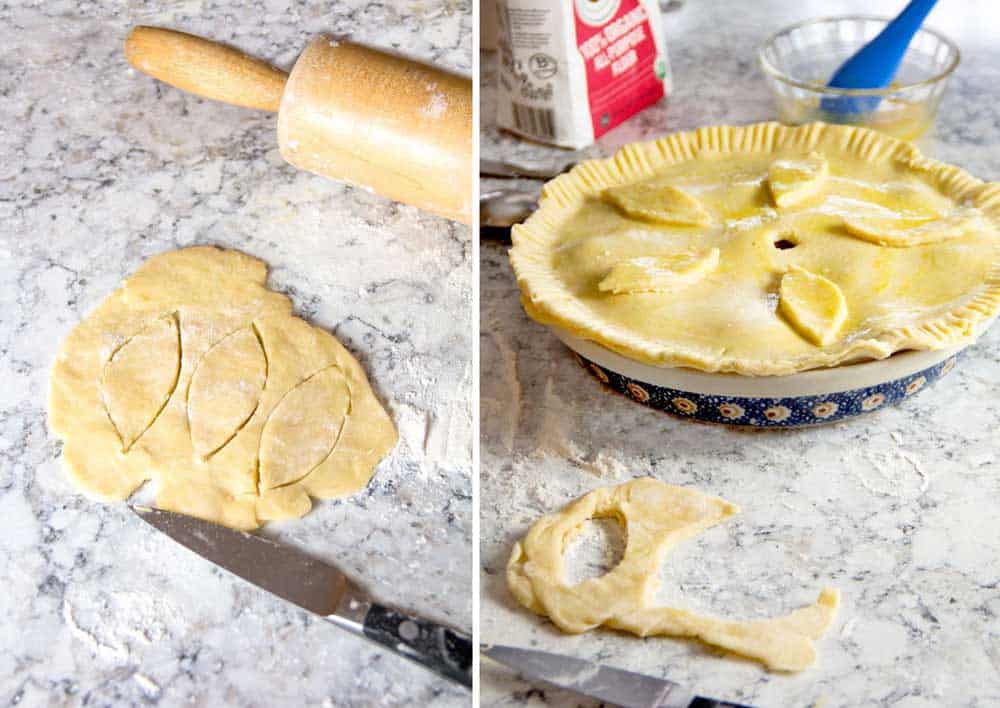 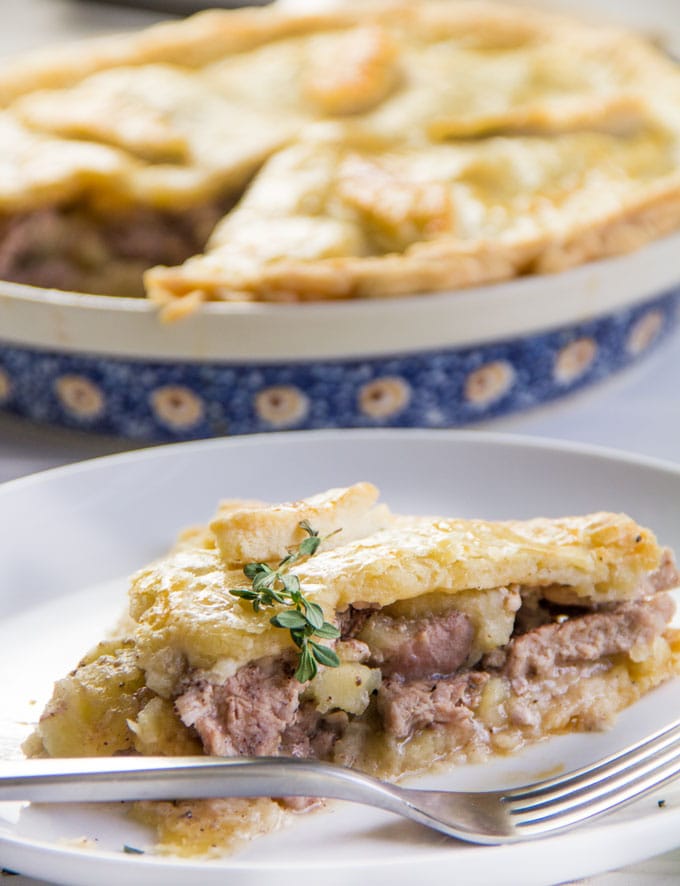 I first met Brook Elliott when he invited me to join The Foods Of The World Forum - an on-line community focusing on the crossroads of food, history, geography and culture. I'm so grateful to Brook for introducing me to the forum, to this delicious Cheshire Pork Pie, and for sharing so many wonderful insights about historic recipes.

Brook and Barbara Elliott have condensed much of what they’ve learned about period recipes (called “receipts” in those days) in their two cookbooks: "A Colonial Virginia Book of Cookery, and A Colonial Virginia Book of Cookery, Second Table." You can order their books ($17.50 each), along with some of their other products and a full catalog, from Historic Foodways, PO Box 519, Richmond, KY 40476. You can contact Brook and Barbara via email at HistoricFoodways@hotmail.com.

Here's the Cheshire Pork Pie recipe. If you make it I hope you'll come back and leave a star rating and a comment. I'd love to know what you think!

A hearty meat pie made from lean pork tenderloin, tart apples and spices. Simple and delicious.

Equipment:  a 9 or 10-inch pie pan, lightly oiled or buttered

For The Pastry Dough (makes a double crust):

For The Pork Pie Filling: