×
You are here: Home / Side Dish / Skillet Brussels Sprouts with Bacon & Sherry
Jump to Recipe·Print Recipe 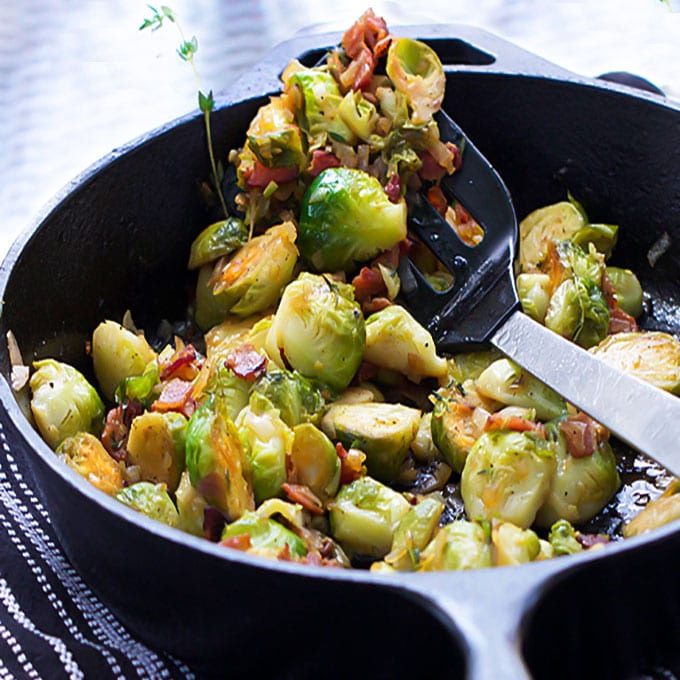 I have a bunch of things tell you about: a delicious recipe, a great new cookbook, and why I love cooking dishes like this in my cast iron skillet. I'll start with the recipe. As I've said many times, I'm in awe of chefs that can make a vegetable into something crave-worthy. This recipe for skillet brussels sprouts does just that. The brussels are seared in a hot cast iron skillet with garlic, shallots, hickory-smoked bacon and fresh thyme - then dressed with a sweet and tangy sherry vinaigrette. The flavors meld so beautifully. It's truly irresistible. The recipe is from the new cookbook Lodge Cast Iron Nation 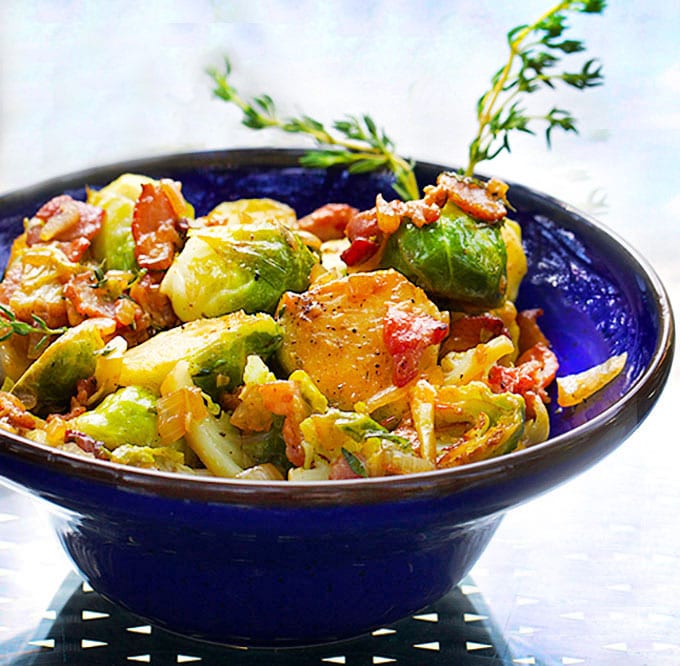 is about the joy of cooking great all-American recipes using cast iron cookware. Here are some of the recipes I can't wait to try: Oatmeal Buttermilk Pancakes, Chile Verde Pork Stew, The Crispiest Chicken Thighs Ever, Roast Pork Loin with Maple-Bourbon-Mustard sauce, and Rhubarb Millet Crisp.

Many of the recipes in the book are contributed by well known chefs and food writers. This brussels sprout recipe is from Kelly English, chef-owner of Restaurant Iris - recently named "best restaurant" in Memphis, Tennessee by Memphis Magazine. Chef English offers these as a starter on the menu at Iris. 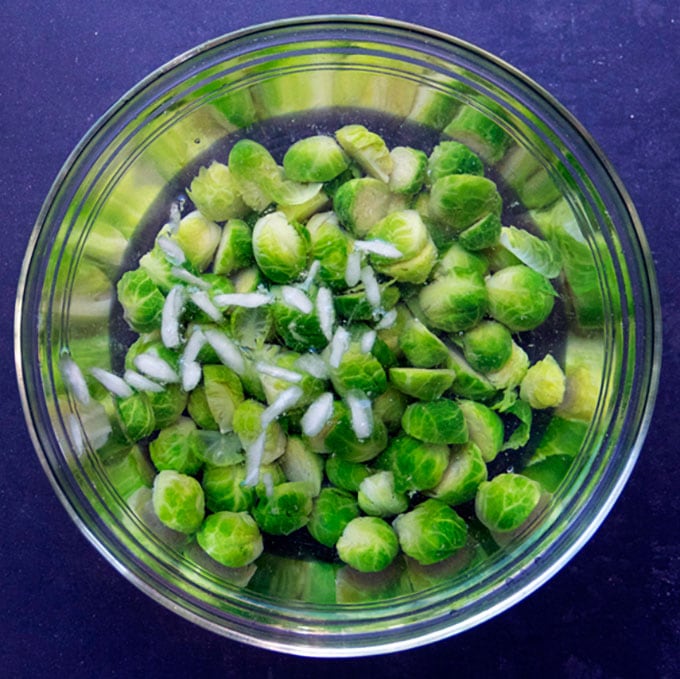 As long as we're celebrating cast iron cooking, I'll tell you why I love my skillet. It started back when I was newly married and stocking my kitchen in my first home in Ridgefield, Connecticut. There were so many brands of pots and pans to choose from and a wide range of prices. It was very confusing! Plus I had read about the dangers of using teflon-coated pans and other non-stick pans, so I couldn't figure out what to buy.

After lots of research I discovered cast iron. It's cheap compared to many of the other choices, and 100% healthy! No synthetic coatings to worry about leeching into your food. I purchased a Lodge 12-inch cast iron skillet and I'm still using that same pan decades later. It's naturally non-stick and it can be safely pre-heated to extremely high temperatures. It's perfect for searing and browning meat...or brussels sprouts. I love my cast iron skillet

so much that it's even become the mascot for Panning The Globe. 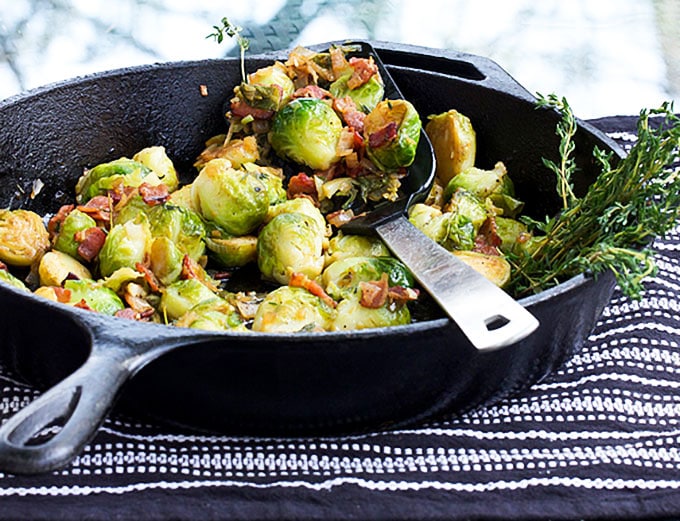 PS - in case you're wondering, I'm not paid by Lodge - just a true fan. I've become friendly with the folks at Lodge Cast Iron, who have generously partnered with me on several occasions by providing great cookware for me to give away to my blog followers. 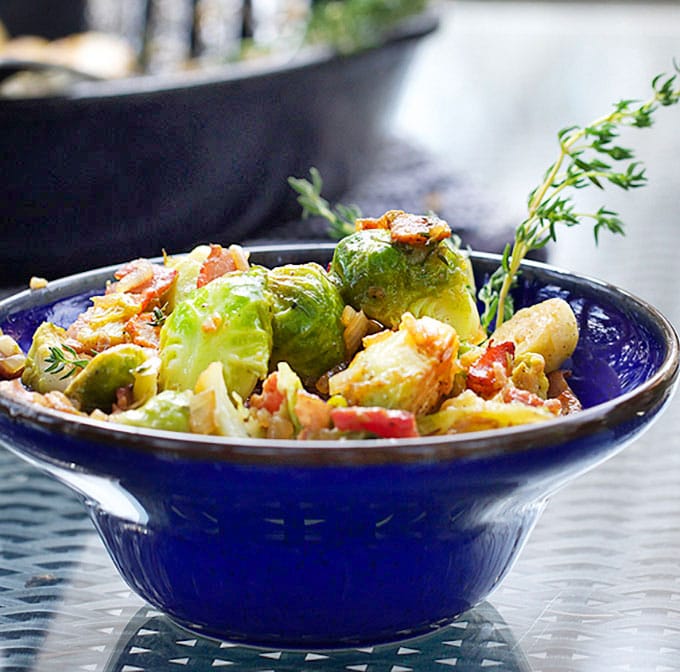 Here's the Skillet Brussels Sprouts Recipe. If you try this recipe I hope you'll come back to leave a rating and a comment and let me know what you think! 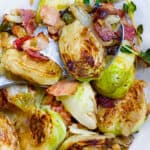 Crisp pan-browned Brussels sprouts with garlic, shallots, bacon and tangy sherry vinaigrette - a delicious veggie side dish you can make in your cast iron skillet.

THIS GIVEAWAY HAS ENDED 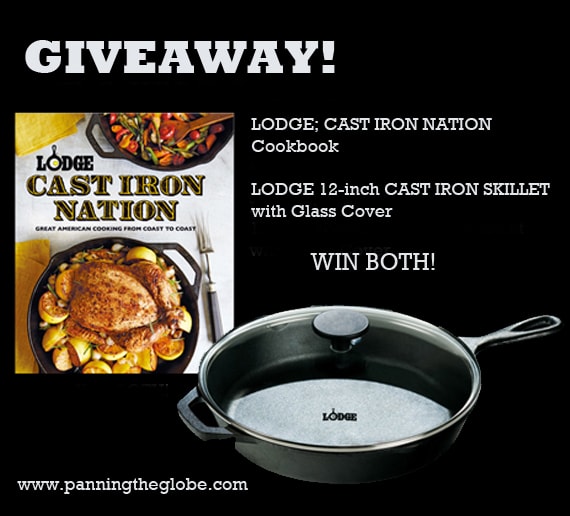