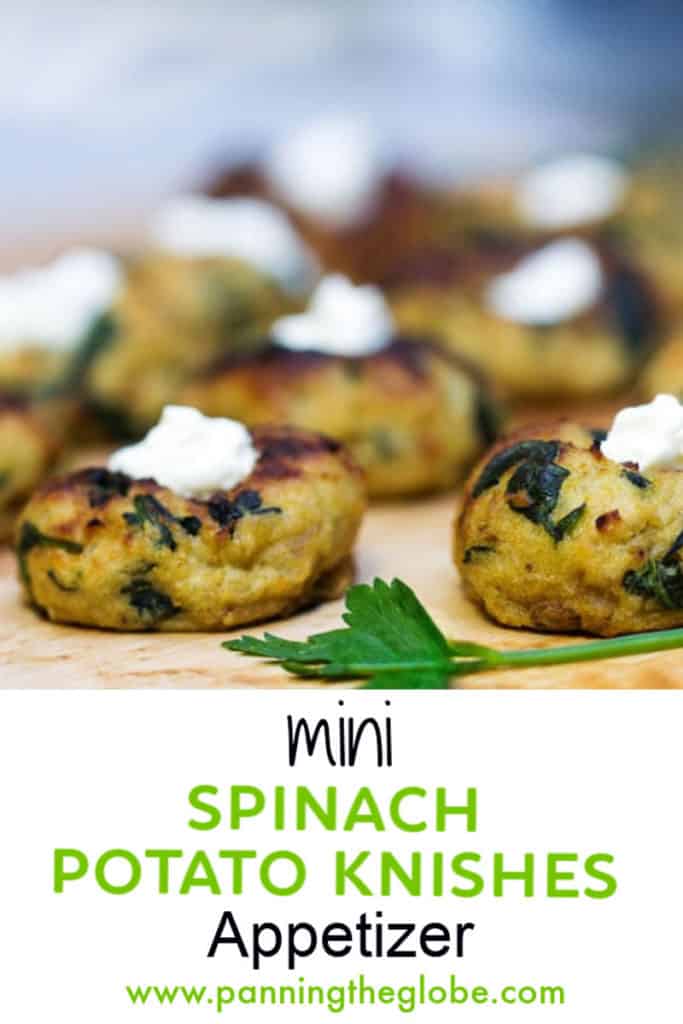 Meet the mini potato knish! It's appetizer-sized and perfect for Passover. But you don't have to celebrate a Jewish holiday to enjoy these. I've made these for my New Year's Eve party and they disappeared quickly. 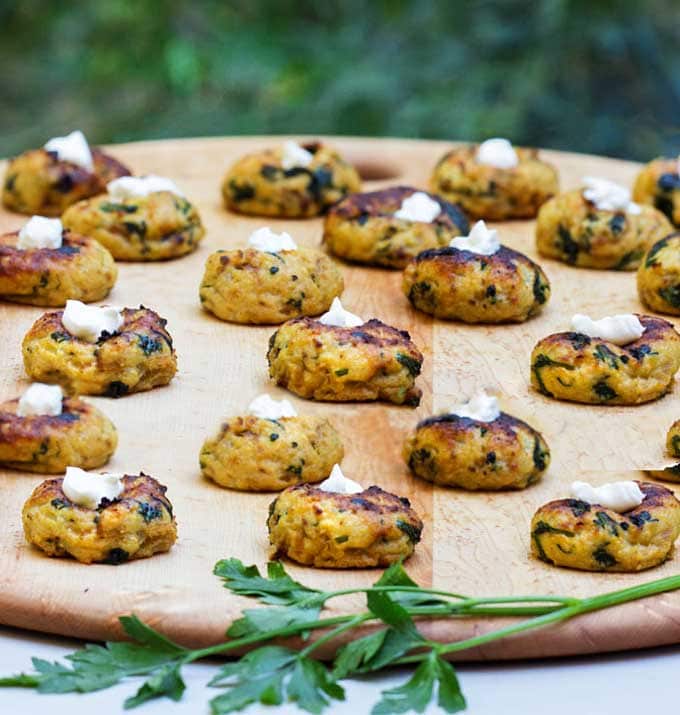 WHAT IS A POTATO KNISH ANYWAY?

A potato knish is one of the best food inventions of all times. Whoever thought to turn caramelized-onion mashed potatoes into something you can grab and eat, holding it in your hands, was a genius!

Knish is a Yiddish word meaning pastry. Knishes came to American via Jewish Immigrants in the 1800's, so New York City (my home town) became the land of knishes. They were first sold in push carts, then knisheries and Jewish delis.

Yonah Schimmel's Knish Bakery is the most famous NYC destination for a potato knish. It opened in 1910 on Manhattan's Lower East Side and has been there, selling knishes, for over 100 years and counting.

Whenever I eat a potato knish or even think of one, it evokes memories from childhood. Eating a knish was not usually a planned thing. It was more like an amazing discovery that would magically appear before my eyes just when I was feeling famished.

My Dad would take me out for lunch to a Jewish deli. We'd stroll into the restaurant and suddenly dozens of knishes were before me, lined up in the deli case at my eye-level, strategically placed, I'm sure, to inspire an impulse buy.

When you're hungry and you spot a potato knish, your dreams have come true.

I developed this potato knish appetizer recipe spinach and potato knishes for the Idaho Potato Commission. My goal was to create an easy recipe for a bite-sized potato knish that would be delicious and festive enough for any occasion.

I've tested these out many times on friends and family to rave reviews. I even had the occasion to serve them on a silver platter with creme fraiche and finely minced red onion. 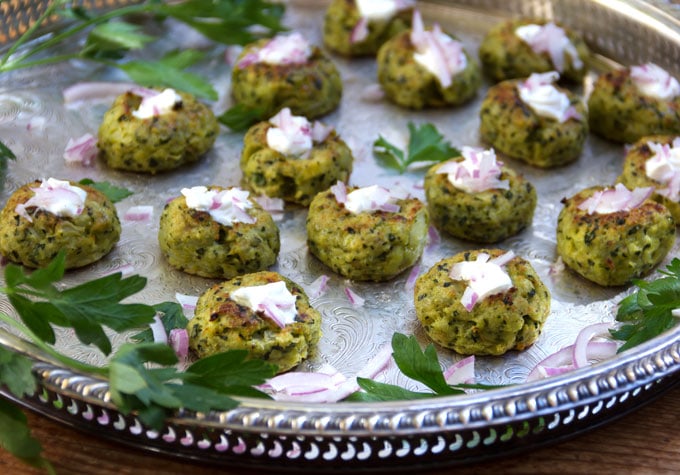 These mini spinach potato knishes are inspired by the Yonah Shimmel type knishes of my childhood but they are not made in the traditional way. The more traditional potato knish recipe is quite a big undertaking. It takes about three hours because the potato filling is wrapped in dough that has to be mixed, rested, rolled, filled, shaped and baked.

For this recipe, Instead of making dough and stuffing it with potato filling, I added a small amount of flour (or matzo meal for Passover) right in with the filling, just enough to hold the knishes together and give them that authentic potato knish taste without compromising the fluffy texture.

Make The Knish dough Ahead of Time 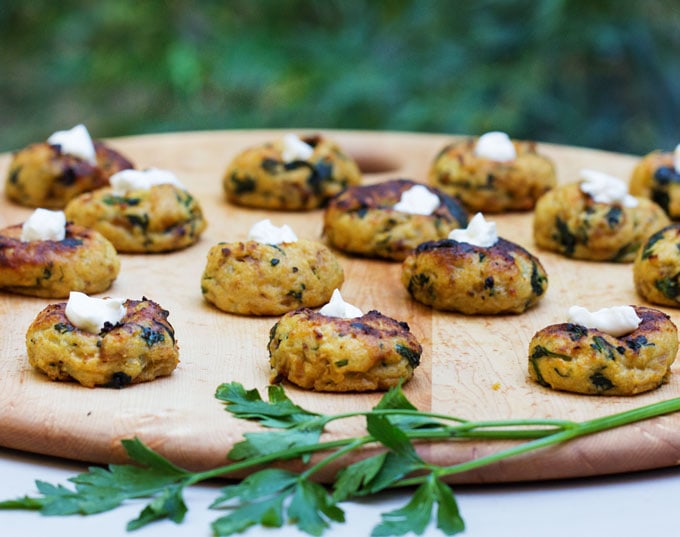 These delicious knishes are a perfect appetizer for Passover but, as I already said and want to emphasize, you don't have to celebrate a Jewish holiday to enjoy these. Everyone should have the pleasure of eating potato knishes - they are very special! 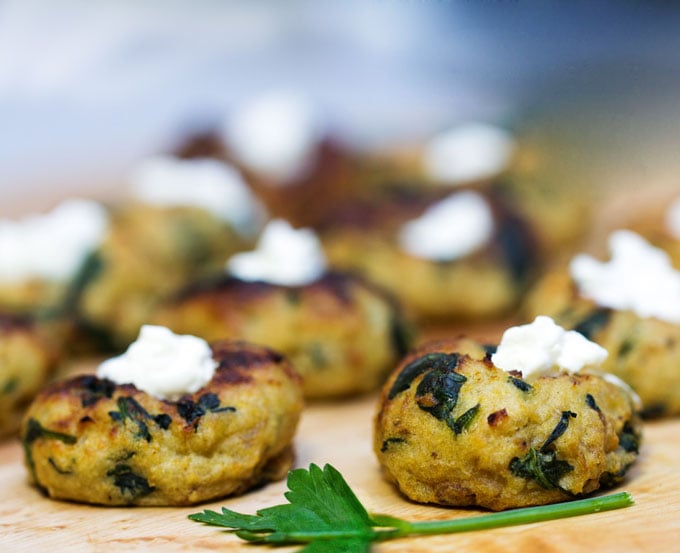 If you like this kind of dish, you may want to check out this recipe for Turkey Kreplach Soup and Quick Potato Knishes. And you may also enjoy these simple and delicious Ecuadorian Cheese and Potato Patties.

Here's the mini spinach potato knish appetizer recipe. If you make these I hope you'll come back and leave a star rating and a comment. I'd love to know what you think.

PREP THESE AHEAD: After you've made the dough (step 4) roll it into a ball, cover tightly with plastic wrap, and store in the fridge for up to 24 hours. Let chilled dough sit at room temperature for 30 minutes before proceeding to step 5.